My husband Howard and I have joined forces to participate in Charcutepalooza. This group, organized by Cathy Barrow and Kim Foster, will spend the year playing with meat as we explore Michael Ruhlman and Brian Polcyn’s book, Charcuterie: The Craft of Salting, Smoking, and Curing. This will be a joint effort. Howard will be “head meat guy” as we cure, brine, smoke, and otherwise preserve meat as the year passes by. I’ll be the sous chef, plus I’ll play scribe as I’m already blogging about what comes out of our kitchen.

Each month offers a new challenge. Experiences are summarized in a blog post on the 15th of the month. Duck prosciutto is one that can be done anytime this year. We missed the curing challenge in February, but we’ve joined up for March for brining as we corn a brisket for our annual St. Patrick’s Day dinner.

Having purchased a corned beef each March, sealed in its corning liquid and ready for a long cook with all the requisite vegetables, a home-corned beef is a revelation. There is no comparison. The process is quite easy. One of the biggest challenges was figuring out the right vessel for the brine process, one that was big enough for a 5-pound brisket, and would fit in the refrigerator. A 12-quart stockpot filled the bill. So, Howard prepared the brine, and the brisket spent five days submerged in the brine in the fridge. We like the Penzey’s pickling spice mix and are fortunate to live just one town away from an actual brick-and-mortar Penzey’s store.

Now comes the interesting part. For the past couple of years, Howard has been playing around with sous vide and LTLT (Low Temperature Long Time) cooking. Rather than several hours simmering on the stovetop, our corned beef was going to get the extra slow treatment. He had purchased a thermal immersion circulator on eBay and mounted it on plexiglass so it can sit over a large pot for cooking.

Howard vacuum-sealed the brined and rinsed corned beef into a FoodSaver bag. Based on timings recommended by Thomas Keller, he cooked the corned beef in the bag for 48 hours at 64C (147.2F). The gentle whir of the motor was background noise in the kitchen as it slowly cooked for two days. 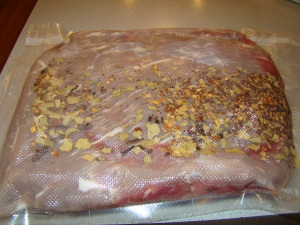 Brisket In A Bag

After two days, it was exciting to cut open the bag and see the results: a firm corned beef, still a lovely pink color, that smelled just like the pickling spices. The taste? It was slightly salty and tasted just like a corned beef should taste, only better. The firm meat sliced nicely for a beautiful presentation.

The corned beef was the centerpiece for an early St. Patrick’s Day feast. I’ve been tweaking the menu for years to capture the spirit of a New England Boiled Dinner, but with more interest and flavor. With the sous vide method of cooking the meat, the option of boiling the vegetables in flavored water is eliminated. That’s sort of OK with me because the boiled vegetables are my least favorite part of the meal. Even though I like the vegetables themselves, I find the end result of boiling to be bland.

This year, I tried something new by roasting the carrots, parsnips, and beets. Over the weekend, at both Whole Foods and Wilson Farm, a local farmstand, we sampled colcannon, which was the perfect way to include the requisite potatoes and cabbage in the meal.

The corned beef came out so well that a second one is simmering in its water bath for Howard’s office’s holiday potluck on Thursday.

This charcuterie book has been part of our library since it came out in 2005, but the only meat experiments we’ve tried were bacon, pancetta, and corned beef, so we’re excited to go further. Can’t wait to see what’s in store for April, and we still have to make the duck prosciutto.

Here are the recipes for the Horseradish Sauce and the Colcannon that accompanied our corned beef dinner.

Place the potatoes in a large pot. Cover with water and bring to a boil. Cook for 5 minutes. Add the cabbage and cook for 10 more minutes, or until potatoes are tender.

In the meantime, melt the butter in the cream. I did this in the microwave.

Place the sliced scallions in a colander, and drain the cooked potatoes and cabbage in the colander, wilting the scallions. Transfer all the vegetables to a large bowl or return to the pot. With a potato masher, mash the vegetables. Slowly add the cream and butter mixture to the vegetables, while stirring with a wooden spoon. Stir until incorporated. Add salt and pepper to taste.

Whisk the yogurt and sour cream together until smooth. Stir in remaining ingredients. Taste for seasoning. Chill for at least 2 hours so flavors can mellow.