Rice pudding is one of my dad’s favorite desserts. Way back when, my dad took me around for college visits (I told you it was way back when). When we arrived in Cambridge, we took a walk through Harvard Square. I remember it started raining, so we ducked into the closest doorway. We found ourselves in Mr. Bartley’s Burger Cottage. Little did I know that we’d stumbled upon a local institution. My dad was hungry, so he ordered an appetizer: a bowl of rice pudding. Then, we feasted on hamburgers and fries. My dad ordered rice pudding again for dessert.

I like rice pudding too. I think of it as a delicious way to use up leftover rice. This week’s recipe for French Fridays with Dorie is Rice Pudding and Caramel Apples. The rice pudding recipe is different than my usual method, so I was interested to try. The caramel apples sounded amazing, independent of the pudding.

Rather than leftover rice, Dorie’s recipe starts by boiling Arborio rice until it is partially cooked. Then, the rice is cooked in a quart of milk (I used 1% rather than whole) along with some sugar until the rice is tender and all the milk is almost, but not completely, absorbed. Simple, other than giving it the occasional stir and keeping an eye on the pot to be sure the milk doesn’t boil over.

The one mystery of rice pudding is what to do with the skin that keeps developing on the top. Do you discard it or just keep stirring it in? Over the course of the half hour I cooked and stirred, I did both.

The apples were relatively easy too. Have I mentioned that I’m afraid of molten sugar? Fortunately, until I looked at the sugar moistened with lemon juice bubbling in the skillet, I didn’t realize that was what I was doing. Once the sugar was melted, I stirred in apple juice and the apples and continued to let it boil away. Finally, heavy cream is added and the caramel gets boiled some more to mellow the sauce.

Now the hardest part – waiting to taste it…The caramel apples were dangerously hot. The rice pudding was far above room temperature. An ice bath solved the problem for the rice pudding. I wanted the apples to be warmer so just let them sit on the counter.

I had to wait about half an hour. As suggested, I layered apples, pudding and more apples, parfait-style in a glass. Definitely fancier than my usual rice pudding, but equally delicious.

Honestly, I don’t know whether I’d make the rice pudding this way. I’d probably use my tried-and-true method. The caramel apples are the keeper part of this recipe. I’d definitely make them again. I am thinking up other ways to use them: topping yogurt, in a tart, in a turnover. The possibilities are endless.

The other Doristas are making the same recipe this week. Check out their links here. Here’s the recipe from Epicurious. You can also find the recipe in Dorie Greenspan’s book Around My French Table..

Now for a word about the Doristas. Last weekend, I attended the International Food Bloggers Conference in Seattle. A primary motivator for signing up was the keynote speaker, none other than Dorie Greenspan, and the opportunity to meet about a dozen of my fellow French Friday bloggers.

Cyberfriends are an odd duck. On the one hand, week after week, you read their personal stories on their blogs and converse through comments and occasional emails so you know them. On the other hand, they are strangers. When I was young, I had various pen pals, and though we wrote letters back and forth for months, I never actually met any of them in person. The anticipation of meeting the Doristas gave me a similar feeling, like I was going to meet my pen pals.

Well, the actual meeting exceeded all expectations. When I arrived in the lobby of the hotel, I recognized a small group from their pictures on their blogs or from Facebook. They recognized me too. Hugs all around, and more hugs as more Doristas arrived. Over the course of the weekend, we bonded. Though we were sort of strangers at the beginning of the weekend, we all hand common interests and the more I got to know each person, I felt like the group was filled with people that would be my friends regardless of how we met. Everyone seemed to genuinely enjoy each other’s company. 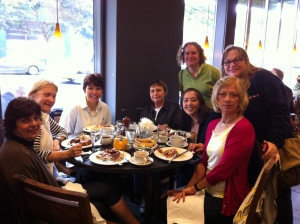 Aside from conference activities, we explored Seattle together for some early morning breakfasts, and on Sunday night, before we went our separate ways, we shared a final dinner together. By the end of the weekend, I felt like I was saying goodbye to my friends from summer camp. My heart swells to think of all the good feelings that flowed between us throughout the weekend. It was a unforgettable experience.

For those of you other Doristas who couldn’t be in Seattle, we really missed you. Hopefully, we will arrange another gathering in the future so more of us can meet in person. Until then, Happy Friday! 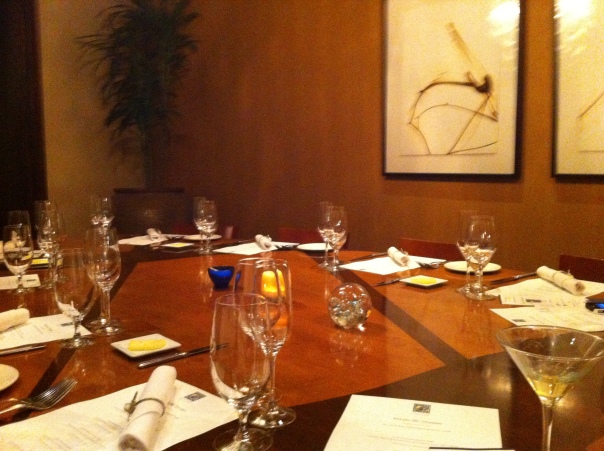 One of the highlights of the weekend at the International Food Bloggers Conference in Seattle was the Saturday Surprise Supper sponsored by UrbanSpoon. Bloggers were randomly assigned to groups. We only knew the neighborhood we were heading to. Our actual destinations weren’t revealed until we were on our way in the bus.

Being from out of town, I am unfamiliar with the Seattle restaurant scene. I am aware of the Tom Douglas empire because I’ve browsed, bought, and cooked from some of his cookbooks. Beyond that, I don’t have a clue. If I were a local, I’d know that dining at a John Howie restaurant would be a special treat!

My group arrived at Seastar Restaurant and Raw Bar in the South Lake Union neighborhood of Seattle. John Howie himself welcomed us to dinner. We were seated in the elegant private dining room to enjoy our 5-course Chef’s Tasting Menu.

The meal started with an amuse bouche: a skewer of pickled vegetables: fennel, caperberry, and locally foraged chanterelles. A week ago, I’d never eaten chanterelles before, but after a week in Seattle, I’ve had them three times. Sauteed, roasted, and now pickled. I’ll always think of them as a Pacific Northwest delight.

I’m still learning about pairing wines with food. In a restaurant, I’d typically order a glass of wine I like and drink it throughout a meal regardless of what I’m eating. A tasting menu with wine pairings is a fun lesson to learn what really goes with what. At the Seastar dinner, the sommelier Paige introduced a different wine with each course. And so the tasting menu begins…

The first course was Pacific Northwest Albacore ‘Crudo’. This is the same fish that we’re all familiar with in a can, but because it was ultra fresh, the tuna was raw, in the style of sashimi, but sliced extremely thin. The fish was garnished with avocado, roasted and dehydrated corn kernels, sprigs of micro cilantro, and a chili vinaigrette. My favorite flavor in this dish was the intense nutty taste of the dehydrated corn. Accompanying this starter course, Paige poured us a glass of bubbly, in this case, Roederer Estate Brut from the Anderson Valley in California. 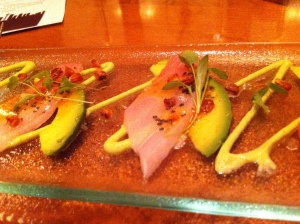 More fruits of the sea followed. We enjoyed a Seared Diver Scallop on a bed of golden beet carpaccio, topped with arugula and a black truffle vinaigrette. Beets are one of my favorite vegetables, and I loved the paper-thin sweet slices this dish was built on. To sip along with the scallop, we drank a glass of Joesph Drouhin Macon-Village from France. Unfortunately, my picture of this course was too blurry to do it justice, so you’ll just have to imagine it.

The middle course was a substantial piece of Alaskan Halibut wrapped in pancetta. The plate was coated with a tomato coulis topped with a bed of tiny Beluga lentils studded with roasted mushrooms. The roasted fish came next, with a garnish of micro basil and basil oil. This hearty course was accompanied by a glass of Stoller Pinot Noir from Dundee Hills, Oregon. The wine was light enough not to overpower the fish, but heavy enough to hold its own.

After a scoop of a cleansing sorbet made with berries and port, we moved away from the sea. Who can resist a filet mignon poached in butter? The tender steak was accompanied by a cheesy croquette and more mushrooms cooked in a cognac demi glace. A Mark Ryan Merlot from the Columbia Valley of Washington, which was made especially for John Howie, was hearty enough to stand up to the rich meat and potatoes. 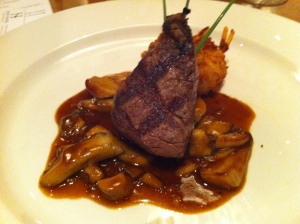 Finally, for dessert, we enjoyed an apple turnover topped with a scoop of buttermilk ice cream, sprinkled with Beecher’s aged white cheddar, and drizzled with a maple caramel sauce. The apple pastry was more tart than sweet, bringing the meal to a comforting close. I was introduced to Sauternes for the first time. Again, though a dessert wine, it wasn’t overly sweet and matched the turnover’s apple flavors.

If you live in Seattle, Seastar should go on your list of restaurants for celebrating a special occasion. The elegant atmosphere, sophisticated food, and impeccable service worked together to create an unforgettable evening.

* Disclosure: Urbanspoon hosted my dinner at Seastar. However, the opinions expressed in this post represent my sincere and honest thoughts about my meal and the venue.