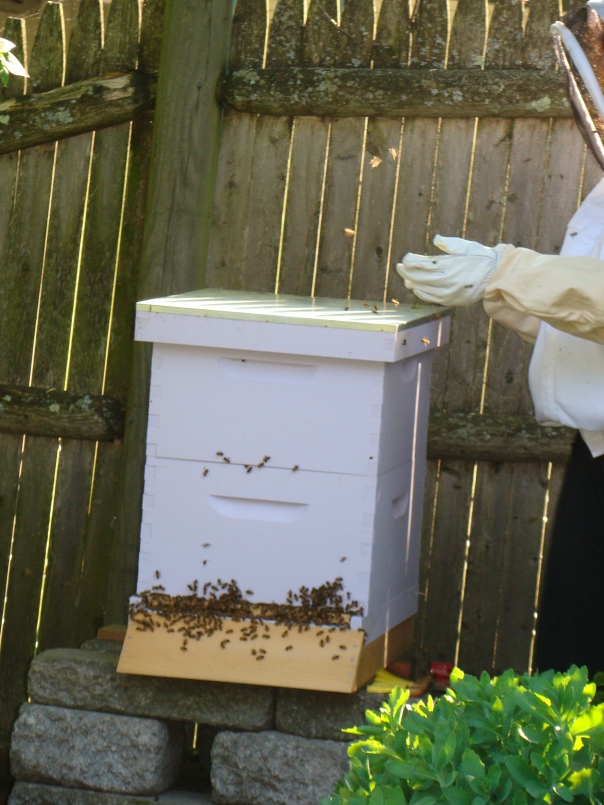 Yesterday marked the end of my first month as a beekeeper. It could be the end of a short-lived stint as beekeeper.

After last week’s inspection when I saw that the frames were filling up with beeswax, pollen, eggs, and capped brood, I was anticipating a big step forward by adding frames to the upper deep box. These frames will give the bees even more room for new brood and for making honey for their own winter stores.

Success on that front, the top box is filled with frames. That might have been the only success of the day. On a scale from one to ten (ten is highest), this week I’d give the beekeeper (that’s me) a two, at best, even though it started out reasonably well.

I gave the bees a few puffs through the entrance and the inner cover. Then, I gently started to inspect each frame. The bees had been busy since last week. Nine frames were covered with drawn wax and a lot of the wax cells were filled with things: eggs, larvae, capped brood, pollen, and honey. I even saw the queen hard at work.

Some of the cells in the middle of the hive, where I remember seeing capped brood last week, were empty. I assume that that my first round of baby bees has hatched, cleaning out their cells which now await another round of eggs.

To my novice eyes, everything looked fine. No new supercedure cells either, so Nancy was right, they were just practicing.

I added the second box on top, without the inner cover between the boxes this time. Then, I added ten new frames and covered everything up with the inner then outer covers. All was still going well.

With the upper box filled with frames, I now have to change how the bees are fed their sugar syrup. The feeder I have is known as a Boardman feeder. So far, the feeder has rested on top of the inner cover, sitting inside the empty upper box, but that won’t work anymore. The feeder can protrude from the front of the hive, so that was the goal.

Easier said then done. The first issue was that the smoker was out, again. Feeling I was almost done, I underestimated how much I was annoying the bees and just continued along. To place the feeder at the entrance, I had to remove the entrance reducer that was sitting there. Boy, did that piss off the bees. Of course, I’d feel the same way if a stranger came by and unexpected burst open my front door.

They weren’t shy about letting me know how they felt. The top half of me was well-covered, but the bees starting landing on my pants and stinging through. I was trying hard to brush them off, but they kept on coming. I didn’t really want to take my pants off right in the backyard, and I didn’t want to run into the house either. Howard got stung on his arm and Bella (the dog) did too (the trifecta). No one got it like me though. I was stung by 10-15 bees. Once on my foot (through my sock), and the rest on my thighs (through my pants).

It really hurt (and still does). I have always had strong reactions to insect bites, like mosquitoes and spiders. It turns out that bees fall into the same category. On the positive side, I didn’t have a whole-body reaction and didn’t go into anaphylactic shock, so I’m not truly allergic. I’ve been mildly concerned about that, never having been stung by a bee before I took up this hobby. However, over 24 hours later, my thighs are still covered with red circles the size of oranges, and they are hot and swollen. And my foot is swollen as if I sprained it. Being me right now isn’t the most comfortable way to be. (I won’t be sharing any photos of my battle scars as they are just too gross.)

My biggest problem seems to be the smoker. I haven’t mastered making a fire that puts out smoke for the length of my inspection. I’m OK at the beginning, but then the smoke peters out, before I’m done needing it. I am going to have to figure out how to do this step right or I’ll have to stop this hobby.

Fortunately, I can let the bees be for the next week while we all recover this week’s visit. I think the major issue (other than wearing the wrong pants) is my lack of skill with the smoker. I’ll see what I can do about that (with Howard’s help) for my next inspection. My confidence is somewhat shaken, but I’m not quite ready to thrown in the towel. Obviously, I still have a lot to learn.

The beekeeping continues. I’m a little late in reporting on last weekend’s hive visit because I visited again today, Memorial Day. Today’s visit warrants its own story, so you’ll have to wait until tomorrow for that. In the meantime, let me tell you about last week’s visit.

Laury and I double-teamed again and inspected my hive, then Laury’s hive. Being new at this, it’s wonderful to be able to see how the two hives progress and compare. The moral support is invaluable as well.

Inside my hive, there was lots of capped brood, pollen, honey, and I saw my queen again. The only unexpected sight was a couple of supercedure cells. These mean the bees might be thinking about replacing their queen. I wasn’t sure what to do, but after consulting with Nancy, she said not to worry and just to remove these cells. She felt they were “just practicing”. I’m not sure what that meant, but that’s what I did.

At Laury’s, everything looks great! She also has plenty of capped brood, pollen and honey, though we haven’t seen her queen.

The frames in both hives are filling up nicely, but not quite enough to add the next box of frames. Maybe next week. In the meantime, inside the capped brood, the next round of bees continue to develop. The first of them should be hatching during the week. Until then…