People have strong feelings about Valentine’s Day, for or against.  On the one hand, the holiday was probably invented by Hallmark to sell cards.  On the other hand, I love celebrations of any kind.  Personally, I stand firmly in the “Pro” camp.  What could be wrong about tell the special people in your life that you love them?  I buy cards and send them to family and friends (don’t be offended if you didn’t get one – I limit myself to one package each year).  For Howard, I buy a special card, and we make a nice dinner that starts off with Champagne.

There are so many recipes to choose from, in the books on my bookshelves, the magazines in piles, the recipes I’ve clipped, recommendations from my sisters, and the resources across the Internet.  Now that I’m back on the “Cook the Book” train with Cook the Book Fridays, the choice for a few meals each month is simplified.

This week’s recipe from David Leibovitz’s My Paris Kitchen offered the perfect idea for a romantic dinner for two.  Steak Frites au Beurre de Moutarde  – in English, Steak with mustard butter and French fries.  Because I’m scared of deep-frying, I was wary of the accompanying French fries, but upon reading the recipe, learned they were oven fries.  Russet potatoes are cut in to French-fry-sized batons, tossed with olive oil, kosher salt, and fresh herbs, then baked until crispy.

Meanwhile, rib-eye steak is seasoned with smoked salt, chipotle pepper and fresh parsley, then seared to perfection in a cast-iron pan.  The piping hot steaks are served with dollops of compound mustard butter, made with both Dijon and dry mustard powder.  To round out the meal, I made this delicious recipe for tahini-roasted broccoli from Food52.

What a winning combination for a relatively simple, yet restaurant-worthy meal!  I’m excited to know how to make really great fries without frying too.  There’s some leftover mustard butter so I’m curious if anyone has suggestions to use it up.

I have to mention dessert too.  I’ve long been a fan of molten chocolate cake.  The recipe for Deep-Dark-Chocolate Pudding Cakes from Joanne Chang’s newest book Baking with Less Sugar is my new favorite recipe.  It’s to die for!!!!

To read all about my friends’ steak dinners, check out their links here.

Due to copyright considerations, I don’t share the recipe here.  You can find it on pages 206 (steak) and 219 (frites) of David Leibovitz’s My Paris Kitchen.  Or feel free to drop me a line and I’ll share it with you.

Posted in Cook The Book Fridays

Of course, there have been specific recipes in Dorie Greenspan’s book Around My French Table that have become favorites. Lazy People’s Chicken is at the top of that list. However, more than the recipes, it’s the techniques and “formulas” that I’ve learned and added to my repertoire that make this book such a treasure.

This week’s recipe for French Fridays with Dorie was one of these non-recipe formulas. Christine’s Simple Party Soups was this week’s challenge. Dorie offers a trio of soups: red pepper, asparagus, and broccoli. The recipes were as simple as you can imagine. Basically, the ingredient list includes just two things: the featured vegetable and some stock. Hmmpf! How could that be tasty?

Most soups I make, and I make a lot of soups, start with sautéed onions in butter and oil and maybe some carrots, celery, and garlic before adding the main vegetable. For this soup, there’s none of that. You add chopped vegetables to boiling stock and simmer until the vegetables are cooked, then puree in the blender. That’s it. That’s all. 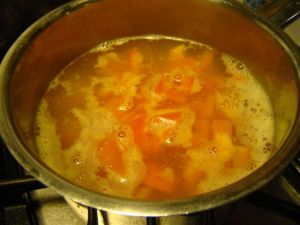 The end result should be called Essence of Vegetable Soup. The flavor of the featured vegetable comes through loud and clear. And, it’s January, so vegetables aren’t even at their peak. (I used frozen asparagus, fresh red peppers and broccoli). 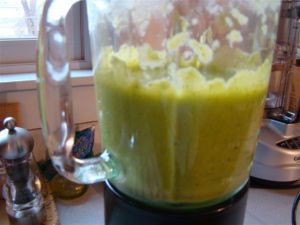 Pureeing Soup in the Blender

To top the soups, Dorie offers instructions for spiced whipped cream. I’m not a huge fan of whipped cream, so, instead, I used dollops of Greek yogurt and a sprinkle of the recommended spice, a different one for each soup. That would be red pepper flakes (I used Aleppo) for the red pepper soup, cardamom for the asparagus, and curry powder for the curry. I loved the light touch of spice with each soup. I’m wondering how it would be to add the spice to the soup as it simmers, but I’m worried that the pure vegetable essence that I also loved would be lost.

Each soup was distinct and delicious. Though I reduced the liquid by two-thirds because I like my soup thicker than Dorie does, the red pepper was still very thin compared with the others. My favorite is either the asparagus or the broccoli. It’s hard to choose. Howard was away most of the week, but liked the red pepper soup as a starter for last night’s dinner. He brought asparagus soup for lunch today, but I haven’t gotten a report yet.

My mind is running through the roster of other vegetables that could be used. I’m hoping this will be equally successful with winter’s root vegetables, like carrots, squash, or rutabaga. I’ll be giving it a try.

The recipe can be found in Dorie Greenspan’s book Around My French Table. To see how my French Friday friends made out with their simple soups, follow their links here.