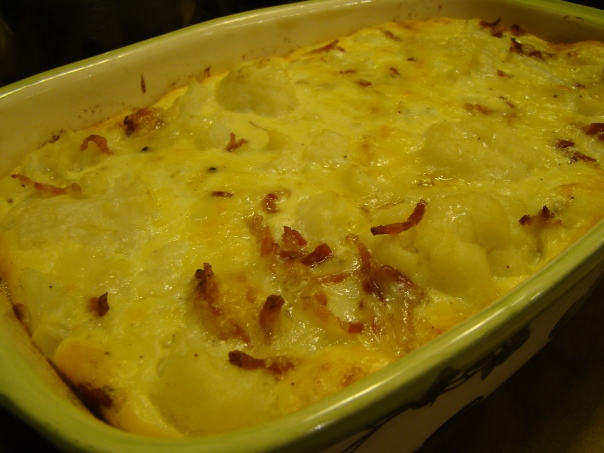 The last French Fridays with Dorie recipe for 2011 was a clear winner at our house: Cauliflower-Bacon Gratin. I got a new oven earlier this week, and this was the inaugural dish baked in the oven.

I struggle to like both cauliflower and broccoli, but I’m getting there. This dish definitely paves the way. What’s not to like about anything cooked with bacon and custard and cheese?

The gratin is sort of like a crustless quiche, but a little more substantial.

The cauliflower is meltingly tender.

The bacon is smoky.

The custard that holds it all together is creamy, and I love Gruyere cheese.

Dorie suggested the gratin could be served as a main dish or a side. I opted to serve it as an entrée with a green salad on the side. It warmed our insides and filled our bellies. I agree it would be a nice complement to a simple preparation of meat or chicken. Leftovers held up well too.

When I was making this, I was a little frustrated because it called for a cauliflower, but there was no guidance about its recommended weight. Also, it called for the cauliflower to be broken into florets, but not their size. I had two different cauliflowers in the refrigerator, one twice as big as the other. I used the bigger one, but some of the florets were huge. I ended up quartering the giant ones. In the end, I realized that none of my anxiety mattered. I know it would have worked out fine with a bigger or smaller cauliflower and a bigger or smaller florets. The gratin is quite forgiving.

I can’t wait to read about the other Dorista’s gratins. That’s what I’ll spend the rest of the evening doing, while I enjoy the last crème brulée from last week — now successfully torched with turbinado sugar, rather than brownulated, on top. (Thanks Elaine!)

You can read about their gratins too by following the links on the FFwD site. We are asked not to post the recipes, but I found it posted here on Leite’s Culinaria. That doesn’t mean that if you find Dorie’s recipes appealing, you shouldn’t get yourself a copy of Around My French Table.

Happy New Year 2012 to all my cooking friends! It’s been a great year getting to know you all and sharing a passion for the kitchen with you.

Bella Shows Off the New Oven

For many years, Howard and I have made it a tradition of taking off from work for the last week of the year. Typically, we don’t go anywhere. Instead, we spend the week on various housekeeping projects and other things we didn’t get around to finishing during the year. We also take time to do something fun everyday.

For the most part, my doings this week aren’t interesting enough to tell about in detail. However, here are some highlights. 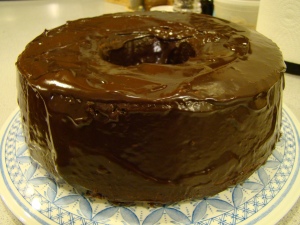 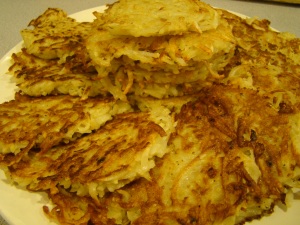 I know, it isn’t everyone’s idea of a thrilling vacation, but I’ll definitely end the year with a feeling of accomplishment!  The week isn’t over yet. I don’t go back to work until Tuesday. There are a few more days and more projects on the list and more adventures too. Stay tuned.