The recipe on deck this week for Cook the Book Fridays is Duck Fat Cookies or sablés à graisse de canard, if you want to sound more elegant. In reading the notes accompanying this recipe in David Lebovitz’s My Paris Kitchen, It wasn’t clear to me whether these cookies are actually made in southwest France where residents eat lots of duck fat or if these were just inspired by those customs.

Most of the ingredient list reminded me of the Victorian currant cookies that I sometimes make at holiday time.  Currants are steeped in brandy to plump them up before mixing them into a shortbread-like cookie dough.  However Victorian currant cookies don’t include any duck fat.  In Duck Fat Cookies, more than half of the fat is duck fat.  Interesting….

The dough came together easily in the stand mixer.  The texture of the dough was very tender.  The dough was divided and shaped into logs and chilled.  Refrigerator cookies, one of my favorite inventions!  I baked one log, freezing the other for another time.  My cookies never really browned, even lightly, though I baked them extra time.  I should have used a slightly higher oven temperature.

The cookies were wonderfully sandy, earning their name of sables.  However, the taste was rather odd.  I used duck fat leftover from Howard’s homemade duck confit, and I could taste the residual spices used to flavor the duck.  In contrast with the sweet dough and the dried fruit, the savory spices were jarring.  The first thing that came to my mind was the memory of a similar contrast in Salted Olive Crisps, where olives dotted a sweetish dough.  I’m thinking savory additions, such as olives and nuts, would make a better combination with the duck fat dough.

To see how the others from Cook the Book Fridays made out, check out their links here.  To try them yourself, you can find the recipe on page 297 in David Lebovitz’s My Paris Kitchen.

The highlight of my week, and maybe the whole summer, was a daytrip we took to Duxbury, Massachusetts for a tour of Island Creek Oyster Farm.  We booked the tour back in April when there was no way we’d know the weather would be picture perfect.  We enjoyed a two-hour tour that included a visit to the hatchery where over 20 million oysters were seeded this season and a boat ride in Duxbury Bay to see where the oysters are farmed.  The culmination of the afternoon was enjoying unlimited oysters at the new raw bar after our tour.  Howard and I ate 4 dozen each.  It was a fabulous day!

Welcome to the Heat Dome {CtBF} 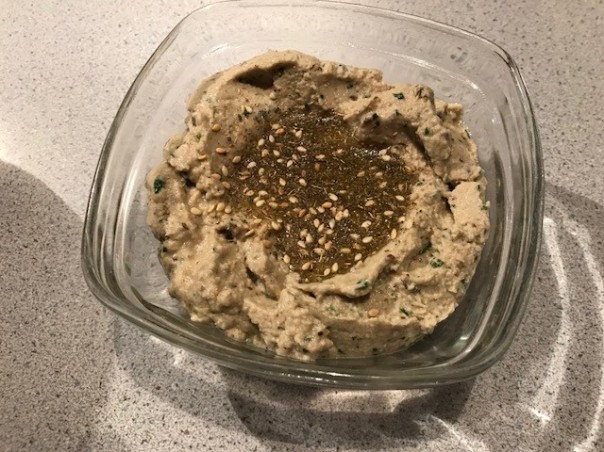 Hi Guys!  I’ve missed you!  Due to lots of travel and visitors and lack of pre-planning, I completely skipped June with my Cook the Book Fridays friends.  It was a great month with two family graduations and my college reunion. 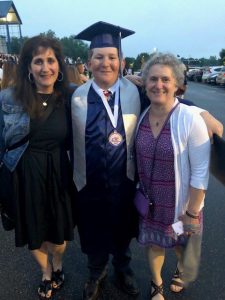 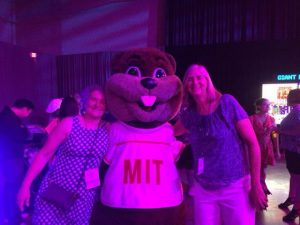 Proud Aunts with Other Nephew’s Graduation

The past week, New England has been under a “heat dome” with high humidity and temperatures day after day in the 90s.  It reminds me of the weather of my childhood in Maryland, which I thought I’d escaped with my residence in New England.   Warmer summers have migrated north.  A house without air-conditioning is not always workable.  A bedroom unit helps, though not wanting to hole up there all day, the current approach involves frequent outings to cooler inside places.  Howard rigged up a brilliant mister system that works for outside time.  I figured out how to sit in the spray and keep a book dry while I read. 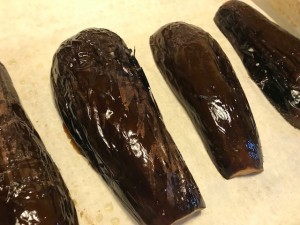 This week’s cooking challenge for Cook the Book Fridays Baba Ganoush (or moutabal, in French) fits perfectly in a sane cooking strategy for a hotter-than-hell week as it involves minimal cooking.  Howard charred the outside of the eggplants while the grill was fired up for some burgers.  The eggplants finish cooking in the oven.  After that, all the ingredients were pureed in the food processor for a wonderful dip to scoop up with pita chips for a snack or part of lunch.  Howard tried it, but as you know, eggplant’s not his thing.  I, on the other hand, really enjoyed this version of baba ganoush.  The recipe makes a generous amount, so one eggplant’s worth (half) might have been enough.

I never seem to make the same recipe twice, but this is a good one.  The smoky Aleppo pepper adds a subtle undertone that complements the charred eggplant.  I also liked the recommended puddle of olive oil on top.  We did the same thing with the hummus from the same book.  It’s an attractive and tasty technique.  If you’d like to give this a try, you can find the recipe on page 64 of David Lebovitz’s My Paris Kitchen.  You can see other reviews of the recipes by following the links here.

Not all my cooking plans for this week were sane.  For some reason, I decided that homemade bagels would be the perfect holiday breakfast on the 4th of July.  What genius thought boiling water and turning the oven up to 500 degrees when it was already in the high 80s in the kitchen was a good idea?  I did follow through, with delicious results, but next time I will take the weather into account.

I’m glad to be back.  See you again soon!