We’re headed into the season of holiday indulgence.  Usually, the week before Thanksgiving, I try to watch what I’m eating because from Thanksgiving until the end of the year, there are a myriad of temptations to enjoy and, though I exercise a fair bit of self control, my threshold for resistance is low.  This week’s selection for Cook the Book Fridays, Chocolate-Dulce de Leche Tart from David Lebovitz’s My Paris Kitchen, threw that plan out the window.

Chocolate is not normally my thing.  Certainly, it’s never my first choice in the dessert department.  This recipe with a chocolate crust, a layer of caramel-y dulce de leche, and a layer of chocolate custard is one that I’d never pick on my own.  In fact, I’ll admit I dragged my feet on making it.  But, even though I waited until the last minute, I knew Howard would like it so I soldiered on.

The first step was to come up with dulce de leche.  What fun!  I skipped the supermarket and turned it into a simple DIY project.  All that’s needed is a can of sweetened condensed milk, a mason jar, and a slow cooker.  I poured the milk into the jar, screwed on a two-part top, placed the jar in the slow cooker and covered the jar with water and turned the heat to LOW.  Ten hours later, the milk transformed from ivory to a golden brown.  Plus it tasted amazing.

I love press-in crusts, and that’s what this recipe called for.  The chocolate cookie crust came together easily in the stand mixer and pressed into the pan just as easily.  There was no salt in the pastry, but a light dusting of fleur de sel before par-baking added the right touch.

To pull it all together, the dulce de leche is spread over the warm crust, then topped with a chocolate custard that was made while the crust baked.  Finally, another sprinkle of fleur de sel to cut the sweetness before returning the filled tart shell to the oven.

The tart is baked, and then, after turning off the heat, it sits in the oven some more.  I thought it was rather wiggly, so I left it there even longer.  I got a late start. By the time the tart was done, it was bedtime, so I put it in the refrigerator where it set up nicely.  I had extra custard, which I put in a ramekin for a chocolate pudding snack.  It also firmed up nicely in the fridge.

I was so glad I made this tart.  It was rather indulgent and very delicious.  As expected, Howard really liked it, but not so expectedly, so did I.  Though we will enjoy it for an after-dinner treat for a few days, there are better ways to showcase it.  It would better appreciated as a contribution to a holiday pot luck or dessert for a dinner party.

I encourage you to try out this tart over the holiday season.  You can find the recipe here on Williams-Sonoma’s website.  You can also find it on page 289 of David Lebovitz’s My Paris Kitchen.  This book has more than its share of winners, so it’s worth treating yourself if you haven’t already.  And to see how my friends enjoyed their own tarts, follow links to their posts here.

Apples of the Earth {CtBF}

Simple or dressed up, I love potatoes.  As the fall harvest ends, I placed a bulk order of root vegetables from a local farm, including a 10 pound bag of gold potatoes and a pound of garlic.   When I read through this week’s recipe for Cook the Book Fridays, I was excited I could enjoy my local vegetables in Scalloped potatoes with blue cheese and roasted garlic by adding only a few more ingredients: cream, sage from my garden (instead of chives), and the wedge of Jasper Hill Farm’s Bayley Hazen Blue in the fridge.

First, a few cloves of garlic are roasted until they are soft and mellow, then mashed into a paste.  The garlic is infused into some cream (which I lightened with some half-and-half).  Layers of thinly sliced potatoes are seasoned, then scattered with chopped sage and chunks of the blue cheese: three layers of potatoes in all.  The fragrant garlic cream covers it all.  The casserole is then baked for an hour until the potatoes are tender. 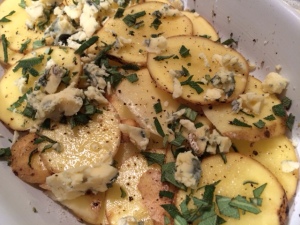 The potatoes were delicious.  They reminded me of the Pommes Dauphinois we made for French Fridays with Dorie back in 2010.  I served this one night with sous-vide turkey thighs confit that Howard and the next with roasted chicken thighs.  Both were a nice foil to the potatoes.  However, this one was a little rich for a weeknight dinner, probably more appropriate for a meal shared with company.

Read what my Cook the Book Fridays friends thought of the potatoes here.  You can make them yourself.  You can find the recipe here or on page 211 of David Lebovitz’s My Paris Kitchen.

As a side note, I’ve been working my way through the approximately 3 gallons of green cherry tomatoes I harvested before our first frost last week.  I love this recipe I found for Tiny Fried Green Tomatoes.  They are so cute and quite delicious.  Also loved this seasonal cocktail, Autumn Margaritas, with apple cider, fresh squeezed lime, and tequila served in a cinnamon-sugar rimmed glass.