I can’t believe another month for Cottage Cooking Club has come and gone… This is the time of the month to share reviews of recipes I tried from Hugh Fearnley-Whittingstall’s River Cottage Veg in July. As in earlier months, I selected from the choices presented by our group’s leader, Andrea, The Kitchen Lioness, which always reflect ways to enjoy the most seasonal ingredients. The other members of the group (there are about a dozen of us) also choose from Andrea’s lineup and at the end of the month, we compare notes.

I didn’t expect how hot July would turn out to be. In New England, we usually have about two weeks of unbearably hot and humid weather, typically one in July and another in August. Hazy hot and humid summers are the weather pattern that caused me to move away from my hometown in Maryland and never look back, at least not during the summer. It seems that with climate change, my childhood weather is catching up with me. Unlike in Maryland, here outside Boston, in our 150+ year old house, we are not equipped with central air. We suffer through with constantly whirring ceiling fans and floor fans, cold drinks, cubes of watermelon, ice cream, frequent showers, and visits to air-conditioned malls and restaurants. I’ll admit to spending my share of afternoons hanging out the public library too.

Fortunately, I cooked my chosen recipe before July’s heat wave hit. The brilliantly-green Summer Stir-Fry with Fried Rice was beautiful to look at! I picked this recipe because I don’t typically stir fry, and I’m not sure why that is. Our backyard sugar snap peas petered out at the end of June, so I headed to the Wayland Farmers’ Market to stock up on ingredients. At the stand for Two Field Farm in Wayland, MA, my friend Charlie introduced me to golden snow peas. I bought a pint to add to sugar snaps, shelled English peas, arugula and scallions (I omitted the zucchini to accommodate Howard). Stir-fried rice with an egg scrambled into it forms the base for the verdant stir-fried vegetables.

As lovely as this dish was on the plate, we found it “just OK”. Perhaps it needed more spice or we didn’t season it exactly to our taste. In any case, it was a fast weeknight meal, but not necessarily something I will make again.

I’m growing a small backyard vegetable this summer. Usually we grow peas for early summer and then cherry tomatoes and basil, but not much else. With my volunteer work at the local community farm and a new seed library launched this spring, I’ve been more inspired this year. In addition to our usual (albeit minimal) crops, I’ve added scallions, zucchini, and pickling cucumbers. (I also grew some Romaine lettuce, arugula, collards, and radishes, but they have grown, been eaten, and are gone.)

When the first of my cucumbers ripened, I decided to also make the Marinated Cucumber with Mint. No cooking required! Because my cukes were fresh off the vine, I did not peel or seed them. Other than that, I followed the instructions. The result was a light, bright cucumber salad. The fresh mint was a fresh touch. Like the stir-fry, this one was good, but not great.

To date, my experience with Hugh’s recipes had been delightful, so I’ll admit that I was a tad disappointed this month to be underwhelmed by my choices. I will be interested in seeing what other Cottage Cooking Club members thought of their recipe choices (which you can see here). And, I’ll look forward to trying out another round of recipes from the August selections.

It’s time for another month with the Cottage Cooking Club, a project led by Andrea, The Kitchen Lioness. Andrea’s merry band of bloggers are collectively cooking all the recipes in Hugh Fearnley-Whittingstall’s cookbook, River Cottage Veg, an inspiring vegetarian cookbook with a wide variety of recipes to suit many different tastes.

I was a bit of light-weight for the Cottage Cooking Club this month. It was by design, so I’m not apologizing. I’m just setting expectations properly. May has been a busy month of travel and surprise birthday parties and visiting with family and friends. It was all good, even great. May hasn’t been a month of much in the way of home cooking. Mostly meals eaten out or at someone else’s house. I’m not complaining. Sometimes that’s a welcome change.

The one recipe I set my sights on from River Cottage Veg was the Herby, peanutty, noodly salad from the “Hearty Salads” chapter. This simple noodle dish made with super-thin rice noodles and tossed with a multitude of green ingredients is served at room temperature. When I made it, the hot weather hadn’t descended but now that we’ve had a string of days in the high 80s, this would be a perfect dish to revisit.

Rice vermicelli is a no-cook noodle. Directions on the package indicated a soak in boiling hot water that’s poured over the dry noodles. Amazingly, you have soft pliable noodles ten minutes later.

The noodles are tossed with a bright and zesty dressing with an Asian flair. Lime zest, finely chopped hot pepper, and some garlic gave it some zing. 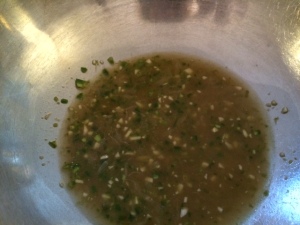 The noodles are topped with roasted peanuts, sliced cucumber, scallions, snow peas and green herbs. I used cilantro along with fresh mint from my herb garden. I didn’t have fresh basil so left it out. There was so much flavor in the toppings, it wasn’t missed. 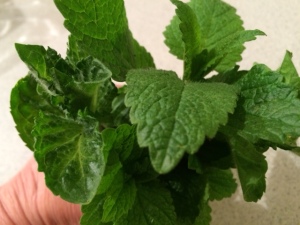 Fresh Mint from my Garden

The mix of chewy noodles, crunchy vegetables and verdant flavorful herbs really hit the spot. I will remember this one for sultry hot summer evenings for a light dinner requiring a minimum of actual cooking.

My only complaint with the recipe is that the dressing didn’t make nearly enough for my taste. The noodles, while tasty, were a little bit dry. We had some leftovers, so I made a second batch of dressing and added that which did the trick. When I make this the next time, I will triple, or maybe even quadruple, the dressing and add more.

I invite you to check out the other recipes that the Cottage Cooking Club sampled this month. You can check out their reviews here.