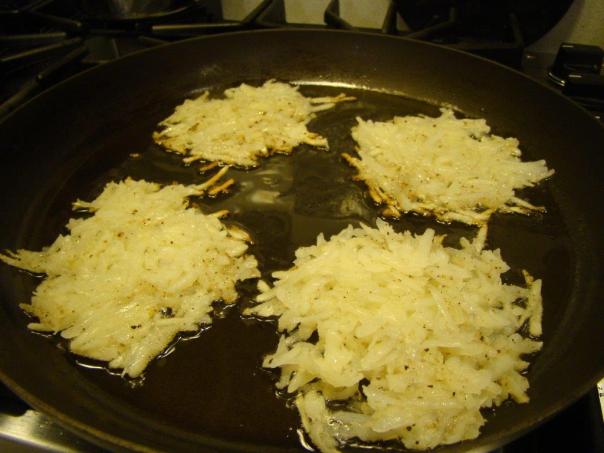 I know, it’s March, not February. So I’m a little late. I cooked my selections for Cottage Cooking Club in February, but didn’t plan my time well enough to write my recap post until today. For the past seven months, I’ve joined Andrea of The Kitchen Lioness and a bevy of other home cooks to try out recipes from British chef Hugh Fearnley-Whittingstall’s cookbook, River Cottage Veg, under the umbrella of the Cottage Cooking Club.

I tried out three recipes in February, though many of Andrea’s choice of recipes looked tempting. These were all I could fit in.

First, I made Potato Rösti, the Swiss version of potato pancakes. I actually made them twice because my first attempt failed. This is really the simplest of recipes with just four ingredients: potatoes, salt, pepper, and the cooking oil. The potatoes are parboiled, cooled, then shredded.

How could I mess this up, you might wonder. Well, I think the instructions are a little misleading. I quartered large baking potatoes. The recipe says that after boiling for 5 minutes, they should be just underdone. After 5 minutes, they were much closer to raw than to done, so I decided to cook them a little longer. At 10 minutes, they fit my description of just underdone. I set them aside to cool. Later, when I tried to grate them, they fell apart in my hand. I ended up turning them into mashed potatoes and calling it a night.

On my second attempt, I drained and cooled the potatoes after they cooked for 5 minutes. I didn’t make a judgment call as to how done or underdone they were. In reality, the residual heat keeps on cooking the potatoes. Once cooled, they are much more cooked than when they come out of the pot, perfectly “just underdone”.

This time, the potatoes grated easily. Shredded potatoes are tossed with salt and pepper. Then, handfuls of the potato mixture are fried in oil to make the laciest and crispiest potato pancakes. We loved them!

I am more accustomed to the potato latkes I make once a year for Hanukkah which start with raw potatoes and also include eggs and flour to bind them together. I enjoyed the lighter texture and pure potato flavor of the rösti. Like the latkes, these aren’t everyday fare, but rösti is definitely a new side dish I’ll add to my repertoire.

Next up was Roasted Squash and Shallots with Merguez Chickpeas which makes an easy and hearty winter weeknight meal. Merguez is a heavily spiced North African sausage, usually made with lamb. This is a vegetarian cookbook, so sausage wasn’t an ingredient. For this recipe, the spice mixture takes its inspiration from merguez. Coriander, cumin, fennel, and caraway seeds plus peppercorns are toasted in a skillet, then coarsely ground. The spice mixture is warmed rosemary, garlic, smoked paprika, cayenne, and salt in oil. Your house will fill with a wonderful aroma.

Can you smell this toasting?

In the meantime, cubes of butternut squash and halved shallots are roasted until tender. I didn’t have time to cook my own chickpeas, but canned worked out fine. To emulate drained freshly cooked chickpeas, I warmed the canned ones in some boiling water for a minute or two. To finish the dish, warm chickpeas are tossed in the spiced oil, then served over a bed of roasted squash and shallots sprinkled with chopped parsley. This is a winning dish. Both components of the dish (the roasted vegetables and the spiced chickpeas) could be prepared and served independently, making it versatile as well. 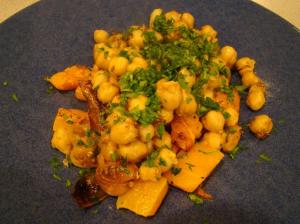 This month has been a trip around the world, starting in Switzerland, moving on to North Africa, and ending in Mexico. For the last recipe I tried, I made Magic Bread Dough and formed it into flatbreads for Refried Beans Foldovers. The dough was easy to prepare, though too messy to get a photo because my hands weren’t clean enough to pick up the camera. After stirring water into the dry ingredients, there was still a lot of flour that didn’t incorporate. On faith, I dumped it all onto the counter and started kneading. After a few minutes, all the loose flour disappeared into the dough. Perhaps that’s why this is called Magic bread dough.

My house is really cold right now (55°F during the day) which made me doubt the dough would rise much at room temperature. I took advantage of my oven’s proofing setting which holds the oven at a constant 100°F temperature. I let the dough rise for about 2 hours. It probably could have gone a little longer, but I was impatient. Then, I punched it down and divided the dough into 8 pieces that I rolled out into circles. My circles about 6 inches across, though I wish they had been a little bit bigger. The rolled out dough rests for five minutes and then gets cooked in a dry, very hot skillet to brown both sides. The flatbreads reminded me of pocketless pitas. We weren’t going to eat all the flatbreads at one meal, so I wrapped each one in a dishtowel and let them cool. Once cooled, I stored them (without the dishtowels) in a plastic bag, reheating before using them later.

The flatbreads were the base for Refried Bean Foldovers which resemble a cross between a burrito and a pizza. The refried bean filling starts with sautéed onions and garlic. It being the dead of winter, I added canned diced tomatoes with their juices instead of grating fresh ones. Finally, a can of pinto beans is added and mashed for a spreadable consistency. The foldover is assembled by spreading the refried beans on a warm flatbread then topping with sour cream and your choice of extra garnishes. I served with diced avocado, grated Cheddar cheese, diced scallions, and candied jalapenos. Fold and eat! This makes a tasty light dinner and an even better lunch. Now that I’m familiar with the foldover concept, I’m thinking that leftover Roasted Squash and Shallots with Merguez Chickpeas would make a delicious filling too.

You can find the recipes in Hugh Fearnley-Whittingstall’s River Cottage Veg. To get reviews of other recipes the Cottage Cooking Club made in February, check out other posts here. I always find these reviews inspiring and add more recipes to my ever-growing “must cook” list.

Another month has gone by, and it’s time to share the recipes I chose to make for the Cottage Cooking Club. If you don’t already know, the Cottage Cooking Club was started by Andrea, The Kitchen Lioness, with the goal of cooking all the recipes in River Cottage Veg, a cookbook by British chef Hugh Fearnley-Whittingstall in one year. It’s a little more relaxing than other cooking groups because, in this group, all of the recipes are be cooked across the entire group, not by each individual participant.

I always find it hard to choose from Andrea’s selections for the month, but I try to pick recipes that I know I can work into the month’s cooking. This month, I made three of the ten possibilities, more than I’ve taken on in previous months. 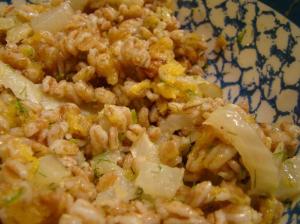 First up, I made the Spelt Salad with Squash and Fennel. This is a warm salad combining chewy grains with roasted vegetables and toasted walnuts. Trader Joe’s sells a parboiled farro that can be cooked in 10 minutes, so I used that instead of spelt which takes much longer. There’s a lot of confusion about the differences (or similarities) of the available heirloom grains on the market. According to Wikipedia, the Italians call spelt farro grande but technically (and genetically) they are different heirloom grains. I’m not going to sweat the difference because what matters to me is the flavor and texture. The quick-cooking TJ farro works for me.

While the farro cooked, I roasted chunks of butternut squash and slices of fennel until tender. A handful of walnuts are added to the pan for the last few minutes of cooking. Cooked farro and the roasted ingredients are tossed together with a lemony vinaigrette to create a hearty salad that could either be the centerpiece of a meal (large portion) or a satisfying side dish (smaller portion). We liked this, but felt it would have been even better with more walnuts.

We had some friends over for a schnitzel and spaetzle dinner. I made the Artichoke and White Bean Dip for our guests to enjoy while I was frying the schnitzel. The dip came together quickly. Chopped marinated artichokes and canned white beans are heated up with sautéed onion and garlic. Then, the mixture is coarsely pureed in the food processor with a touch of yogurt, lemon juice and oil. It’s reminiscent of a hummus in texture, but without the strong tahini taste of hummus plus it’s served warm. I served the dip with pita chips and crudities. It got high marks from Howard and the guests.

Finally, I made the Big Baked Mushrooms. I do not like raw mushrooms, and I always forget how much I do like cooked ones. Portobello (aka “big”) mushrooms are dotted with butter and garlic and baked until tender. As a finishing touch, grated cheese is melted on top. I used an aged Gouda which added a nice nutty flavor. These mushrooms are so easy to put together that, in many ways, they make a nice side dish to round out a meal. 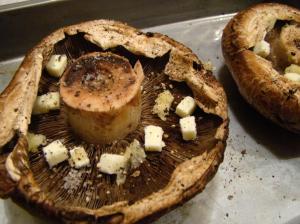 I would make all of these recipes again, but the mushrooms is the one most likely to reappear on my table first.

You can find the recipes in Hugh Fearnley-Whittingstall’s River Cottage Veg. To get reviews of other recipes the Cottage Cooking Club made in January, check out other posts here.

For anyone who enjoys “snow pictures”, a little storm named Juno visited us on Tuesday. According to my snow gauge, she dropped about 2 feet of snow. As I always say, “If it’s going to be cold, it might as well be pretty!” 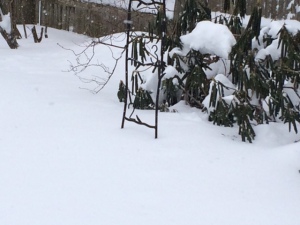