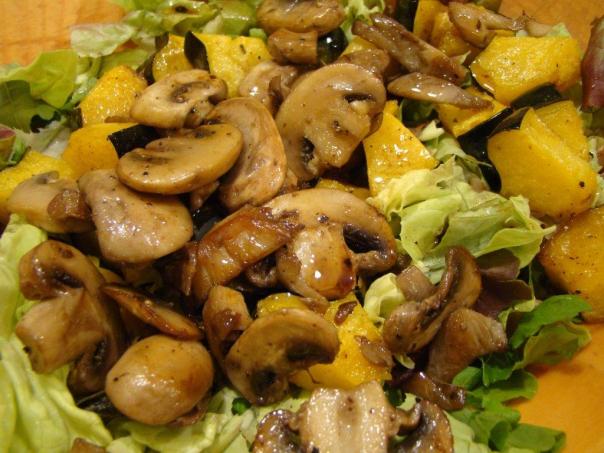 I felt ambitious this month and chose 3 different recipes to make for Cottage Cooking Club, a cook-along group for Hugh Fearnley-Whittingstall´s “River Cottage Veg”. Started in May 2014 by the talented German blogger, Andrea, of Kitchen Lioness, this group is collectively making all the recipes in this book in one year.

The first recipe I tried was for Roasted Cauliflower with Lemon and Paprika. Cauliflower and broccoli are two vegetables that I’ve only recently started to enjoy. I like them best roasted. I’d never tried this seasoning combination before: roasted lemon wedges and smoked paprika. The flavors were delicious, but I mistakenly chose to roast the cauliflower in a high-sided roasting pan because it came out more steamed than what I expect for roasted. I might try this again, but if I do, I’d use a baking sheet with the hopes the cauliflower would caramelize. 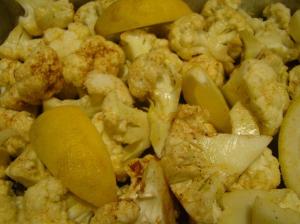 The other two recipes were salads with warm interesting toppings.

One was topped with white beans with artichokes. This comes from the Pantry Suppers chapter. If your pantry is stock with a can of white beans and a jar of marinated artichokes you can whip this up whenever you wish. The beans and artichokes are sautéed together with garlic. This simple combination tops mixed greens for a light lunch. 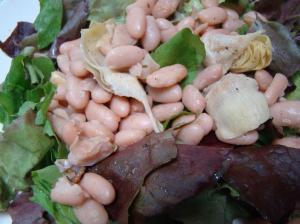 Finally, what’s not to love about roasted squash and sautéed mushrooms on top of salad greens? I think this was my favorite of the three, so it’s pictured at the top of the post. The sweet roasted squash and the earthy mushroom were the perfect pairing. The tangy balsamic vinaigrette tied this hearty salad together. (This recipe called for blue cheese, I skipped it completely.)

After three months cooking along, I have to say that I’m really enjoying this book. The recipes are straightforward and delicious, offering flavor combinations that are sometimes familiar and sometimes new. I also value Andrea’s seasonal selections, allowing me to make the most of the best vegetables around each month. I wonder what November will bring?

garbure from the supermarket {ffwd} 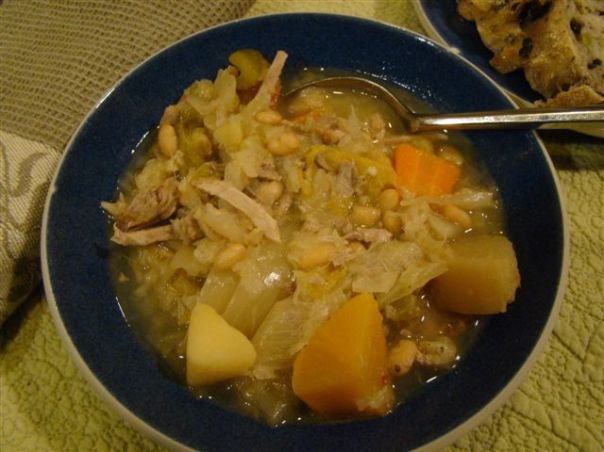 Winter continues… This week’s recipe for French Fridays with Dorie was just perfect for a cold week! Garbure is a meaty vegetable soup that truly sticks to your ribs. In Southwest France, where this soup hails from, garbure typically includes duck confit. Here in the US, though the ingredient list is long, this version can made from ordinary supermarket ingredients.

This is the kind of soup that’s best prepared on a lazy afternoon. You start by soaking some little white (Navy) beans. Then, you brown a pork shoulder. That’s when I realized my large Dutch oven wasn’t going to be big enough for the batch of soup, so I switched over to the giant stock pot. 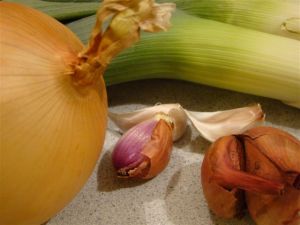 A variety of alliums (onion, leek, shallots AND garlic) are sautéed before adding big chunks of carrots, turnips, potatoes, and celery, the browned pork shoulder, a duck leg, the beans and lots of liquid. I used just 1 quart of chicken broth diluted with water because I felt the ingredients would add enough flavor. Oh, and I can’t forget the cabbage, piles of shredded cabbage. This simmers for an hour before adding some sliced sausage.

I’m never quite sure what type of sausage to use when a recipe calls for “garlic sausage”. Is it kielbasa, bratwurst, or something else entirely? Google didn’t help. I found a fresh garlic-herb sausage at Whole Foods, so I used that. Because it wasn’t precooked, I pan-fried it before slicing and adding to the pot. Then, we had to wait for another hour of simmering.

Finally, the pork and duck meat is shredded and added back to the pot. I’m not sure why my pork shoulder didn’t falling apart. Maybe it needed to cook longer? I had to chop the meat into thin strips rather than just shredding it with a fork.

I know that food safety-wise, it’s not a good idea to put a big pot of hot soup into the refrigerator, warming up the rest of the food in there. I followed Howard’s favorite advice for this time of year: “Use the winter!” That means putting the pot out on the porch for a few hours or in the trunk of the car overnight. I opted for the car, though I’ll admit it reeked of cabbage for a couple of days afterwards.

This recipe makes A LOT of soup. We enjoyed it for several satisfying lunches and dinners, and I froze 3 quart-sized containers for later.

I also like this soup’s connection to charcuterie, at least at our house. The pork shoulder was the leftover half from a recent adventure making pork rillettes. And, the optional duck leg called for in the soup was the catalyst for Howard to make another batch of duck confit (his favorite, or should I say my favorite, of his kitchen DIY projects). The duck confit wasn’t ready to use in this soup, but it will be delicious next week served over lentils, a favorite dinner around here.

Thumbs up from both of us. Every spoonful is full of flavor, lots of different flavors. I love ending the month on a winner!

If you want to try this delicious soup, you can find the recipe in Dorie Greenspan’s book Around My French Table. To see what the other Doristas thought, check out their links here.