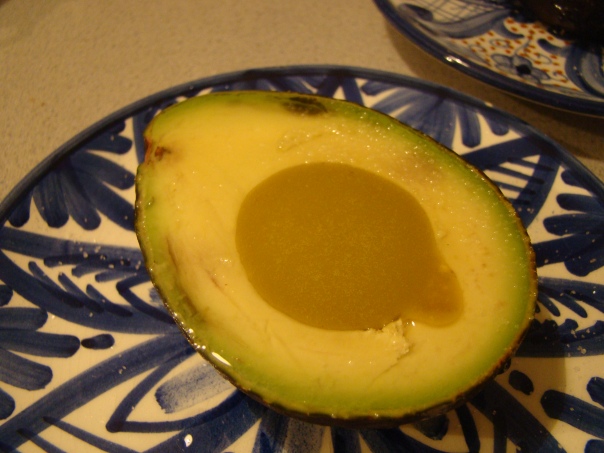 This week’s recipe for French Fridays with Dorie was the simplest of preparations. Any complexity was around sourcing the highlighted ingredient, pistachio oil. Dorie learned this recipe from Anne Leblanc, a purveyor of fine nut oils. Anne Leblanc´s pistachio avocado is a perfect avocado, sliced in half, doused in lemon juice (to prevent browning), and sprinkled with sea salt. Then the hollow of the avocado is filled with pistachio oil.

I was able to locate pistachio oil at my local Whole Foods, but the beautiful labeled 250 ml can of oil was $20. I opted to make my own from this recipe from Food & Wine. Of course, the homemade oil was infused with nuts rather than pressed from the nuts, but the pistachio flavor came through loud and clear.

The verdict on this elegant starter was “interesting, but intense”. The avocado and oil had a silky texture and discovering this new flavor combination was a welcome surprise. I enjoyed trying this one, but eating half an avocado filled with oil is hardly a low-fat offering. Avocados are a staple at our house though I’m thinking next time, sliced avocado with tomatoes over a green salad drizzled with the pistachio oil might be more our speed.

There’s not much more to say about this one. I still have lots of pistachio oil left, so I’m looking for ideas to how to use it.

This recipe comes from Dorie Greenspan’s book Around My French Table. To see other interpretations of this recipe, check out the other French Friday blogger posts here.

If it’s as hot where you as it is where I am, I hope you stay cool this weekend! Happy Friday! 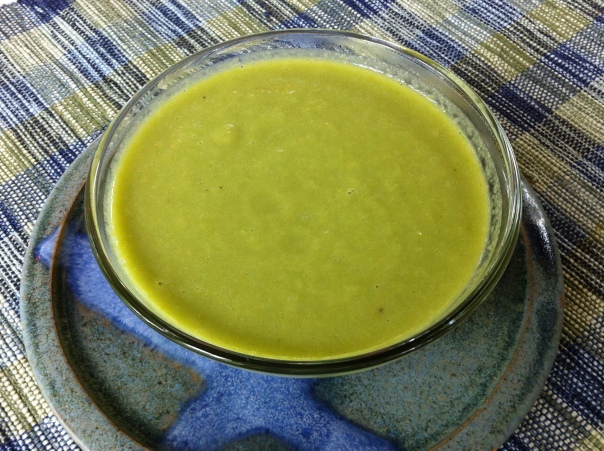 Nothing says spring time like asparagus. On this Memorial Day weekend, technically spring, but the unofficial calendar start of summer, the recipe for French Fridays with Dorie is Asparagus Soup. In New England, Asparagus season has just begun, so this choice was perfectly seasonal.

Two years ago, we relocated (uh, I mean restarted) our asparagus bed in a sunnier location. The trees near the original bed had grown and converted the lighting from sunny to part-shade. With a new asparagus bed, you let most of the stalks grow untouched for a few years, so we only cut half a dozen spears, hardly enough for this soup, but enough to enjoy in a pasta salad.

I LOVE asparagus! I don’t eat it much off-season, but in late May and June, when it’s in its prime, I can’t get enough of it. 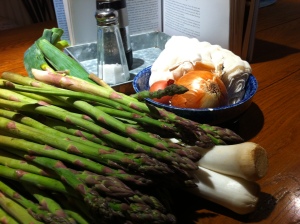 I found this recipe to be a bit fussy, so I tried to simplify it, or at least make it work for me. For example, I’ll be honest. I’ve never been an asparagus peeler. I don’t quite get why this step is often recommended, or even necessary. The only hiccup I’ve experienced with asparagus is when I don’t cut off enough of the woody ends and it’s unchewable, but I’ve never found the peel to be a problem. But, I’m open to learning something new, so I set out to peel the asparagus, two and a half pounds of it. Truth be told, I gave up after 5 stalks.

That left me without the peelings to make the quick stock base from. I took a different tactic. I put the woody ends, and the dark green tops of my leeks, plus the peelings of five stalks of asparagus right into a pot (no wrapping in a cheesecloth, another fussy step), covered them with salted water, and boiled it for a few minutes. Then, I strained out the solids. The asparagus stalks themselves needed a quick cook too, so I brought the stock to a boil again and cooked the asparagus as the recipe called for. From there, I followed the recipe as written. 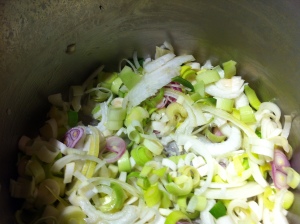 A Colorful Pot of Alliums

When I pureed the soup in the blender, it came out perfectly smooth, so again, I still don’t understand about the peeling step.

I served the soup hot in small bowls. I forgot to buy cream, so we ate it plain. It tasted like the essence of asparagus. I might make this again if I come into a bumper crop of asparagus, though it’s unlikely I can be convinced of to peel any of it.

To see how the other Doristas’ thought about their bowls of green, check out their links here. We don’t post the recipes, but you can find it in Dorie Greenspan’s book Around My French Table.

To my US compatriots, Happy Memorial Day. As much as we use this day to mark the start of summer, we should also take time to remember and be thankful for those who’ve been lost serving our country. I hope you have a safe holiday weekend!