Howard is a master of gravlax. For many years, it’s been his signature appetizer for special parties. With French Fridays with Dorie’s gravlax on the schedule, we decided it was time for a throwdown challenge. I’ll admit to not doing any of the cooking. I was in charge of the shopping for this one. It’s not that I had anything against the recipe, but wanted an equally experienced touch for a better comparison of the two recipes.

I bought a large side of salmon, about 3½ pounds. We cut it in half crosswise and Howard made each half with a different recipe. The basic process for gravlax is to coat the fish with herbs and a sugar/salt curing mixture and leave it, pressed under weight (i.e. cans), in the refrigerator for 2-3 days. During its cold rest, the rub draws moisture out of the fish, curing (cold cooking) it.

The first difference between the two recipes is the flavoring. Dorie adds black and white peppercorns plus coriander seeds to the rub. Howard only adds white peppercorns to his dry mixture, though he rubs the fish with some aromatic liquor first. This time he used Pernod, but aquavit is good too. The main difference is the proportions of sugar and salt in the curing mixture and the total amount of dry rub used. Dorie uses a 3:1 ratio (yes, I’m a math geek) of salt to sugar, and the total amount of rub is just a few tablespoons. Howard uses the opposite: a 2:1 ratio of sugar to salt, and the total amount is a little over two cups.

As I said, this is Howard’s signature appetizer for special parties, and we had the perfect occasion. Every year, we celebrate Christmas Eve with longtime friends who make the traditional celebratory Feast of Seven Fishes. All the guests bring contribute dishes to for the meal. This year, the game plan was to start with an abundant appetizer extravaganza accompanied by a festive punch and other drinks. We brought both styles of gravlax for a broad tasting. (I made mini-crab cakes.) Later in the evening, we sat at the table to enjoy a delicious Niçoise salad, followed by bourride, a French fish stew heavily laced with aioli. Dessert is an array of home-baked cookies, just the right size to fit into any empty parts of your belly. As always, it was a fantastic meal, one we look forward to all year!

Mini-Crabcakes, ready to be baked at the party

The two styles of gravlax had similar texture and were both delicious. Howard’s “original” version gave off considerably more liquid during the curing process and was firmer than the one prepared Dorie’s way. Dorie’s version was also a little harder to slice thin, probably because it wasn’t quite as firm. We brought half of each half to the party, and there was very little leftover. Both were quite popular with everyone. We’ve been enjoying the salmon we kept for ourselves on bagels with cream cheese in the mornings for the past few days. What a treat!

Dorie gives a recipe for a dilly mustard sauce to accompany the fish (which I forgot to take a picture of). We didn’t do a side-by-side comparison of her sauce to our usual. Dorie’s was similar and equally delicious. Her recipe uses using much less oil that the other, so it’s healthier. While the gravlax recipe wasn’t different enough to mandate a switch in the future, her sauce is a new keeper.

You can find the recipe for both the gravlax and the sauce in Dorie Greenspan’s book Around My French Table. It’s also on-line at Epicurious. You can also read about other Dorista bloggers’ gravlax by following their links here.

In case this is my last post of the year (though that isn’t my plan), I wish you all a Happy New Year! May the year ahead be filled with love and laughter, and of course, good food! I’m looking forward to sharing many more kitchen adventures in 2014. 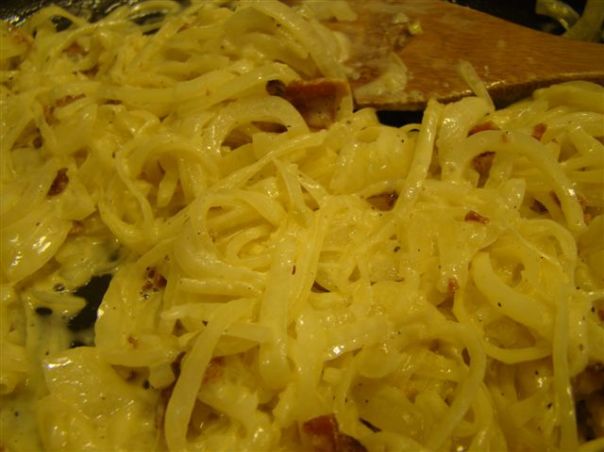 Many moons ago, I worked for a software company called ITP, which was the child of a company with the same name located in Italy. In Italy, the name was short for “Informatica e Tecnologia per la Produzione”. In English, ITP didn’t stand for anything, though we joked that it stood for “Italian Technical People”. One year, a few guys from the Italian office came stateside to work with the team. The company was populated by young technical professionals (computer geeks), and we were very social. We shared meals together, went out for drinks together, and played highly competitive games together (Killer versions of Uno and Pictionary). We integrated the Italians into our fold.

Lucio and Guido were excellent cooks and enjoyed sharing “real” Italian food with us. It was from them that I learned about spaghetti carbonara. What’s not to like about bacon and eggs and cheese. It was also easy to whip up for a crowd. Saute the bacon while the pasta cooks, then toss with scrambled eggs that get cooked by the residual heat of the pasta. Add a healthy dose of Parmesan cheese and, voila (or the Italian equivalent): you have a meal.

For some reason, nowadays, spaghetti carbonara has fallen out of my repertoire. This week’s French Fridays with Dorie recipe, Onion Carbonara, reminded me of what I’ve been missing. The recipe originally came from Michel Richard, a pioneer in molecular gastronomy, by way of Patricia Wells’ table. He redefines the term “playing with your food”. Years ago, Howard and I watched a fascinating video where Michel Richard reinterpreted classic dishes in ways that amused the chef and surprised the eater. We liked it so much, we watched it multiple times. (I searched the Internet high and low, but could not find a link. It might have come from the now-defunct Gourmet magazine’s foray into videos shortly before its demise.)

In this incarnation of carbonara, no pasta is involved. Steamed strands of onion stand in for the pasta, though the sauce is classic. Onion carbonara is simple to make. As I said, you steam the sliced onions. And you fry some bacon. After that, the sauce takes just minutes to complete. Melted butter is mixed with the bacon and cream. The onions (aka faux pasta) are warmed in this sauce. Add more cream and an egg yolk and toss to cook the egg. Finally, add some Parmesan cheese and it’s ready to serve.

The final result was definitely interesting and completely edible. However, I prefer the classic pasta version (or my memory of it) and plan to add it back into my kitchen lineup in the new year. To try the low-carb, no pasta, onion version, you can find the recipe here. Or, you can always find it in Dorie Greenspan’s book Around My French Table. To see how the Doristas did with this one, follow their links here.