Another week, another recipe for French Fridays with Dorie. So far in January, the two recipes I made earlier this month were a little disappointing. I was really excited about this week’s recipe, Chicken B’stilla – and it met all my expectations.

B’stilla is a Moroccan chicken pie, wrapped in fillo dough and sprinkled with sugar. I had this dish once before, at a Moroccan restaurant in Philadelphia, where this was just one course in a multi-course meal we ate lounging on pillow-laden couches around a low table. I’ve seen recipes for it, but I never had the occasion or reason to try it at home.

I made this chicken pie over the weekend, and I think it would be too involved to make on a weeknight. I loved the lovely fragrance as the chicken simmered with the warm spices. The dish is a little unusual. Between the honey in the sauce and the cinnamon and sugar sprinkled on top of the pastry, it is a very sweet though soundly savory dish. It is definitely something different, but I liked it.

The chicken from Chestnut Farms comes as whole legs, so instead of 8 thighs, I used 4 whole legs, that I cut into separate legs and thighs. It was all dark meat that gets shredded in the end, so I don’t think this adjustment made any difference at all.

The recipe called for a 9-inch cake pan at least 2 inches high. Mine was only 1½ inches. I wasn’t sure if it would be deep enough. If it wasn’t, I’d be in trouble. I have a 9-inch springform pan which was 3 inches deep, so I used it instead. It worked out perfectly. It also was very easy to free the pie from the pan. All I had to do was unhinge!

This pie is wrapped in fillo dough, which I haven’t worked with in decades. It didn’t make me nervous because I’ve had good results before. Unfortunately, on this count, the grocery store failed me. It wasn’t that I couldn’t find fillo dough. They carried it. The issue was that, despite following all warnings and instructions about keeping the defrosted dough covered so it would stay moist, the fillo was already dried out when I unrolled it. Something went awry in their storage process.

I dealt with it. I did learn that, for me, it was easier to lay the sheets in the pan BEFORE brushing them with butter than to brush them first and THEN try to move them. I started out brush and moving, but it was disastrous. This could have been because the dough was already slightly crumbling. I ended up using two extra sheets on the top and the bottom to bandage the cracks. It all worked out in the end.

I loved the moist filling. The chicken was tender, and the honey sauce added to the texture. It reminded me a little big of pulled chicken from a BBQ restaurant, but with a completely different sauce and no smoky flavor. I enjoyed the contrast between the filling and the crispy pastry and the crunchy almonds. It was delicious. Dorie said this needed no accompaniments, though I served a green salad with vinaigrette to which I added a teaspoon of Penzey’s Turkish Seasoning.

I hadn’t planned ahead, but I should have invited friends over to share. We did get to enjoy the leftovers. It reheated better in the oven (for dinner at home) than the microwave (for lunch at work), but it still tasted good either way.

My box of fillo came with two sealed packets, and I defrosted one, which had about 20 sheets. This recipe only called for 8 sheets, and I don’t like to waste. I ended up finding a recipe for baklava in Small-Batch Baking by Debby Maugans Nakos. The recipe used 7 sheets to make a mini-baklava, in a loaf pan, making 8 pieces. There was just enough to compliment the b’stilla the first night and with the leftovers. The syrup for this recipe had a strong orange flavor which I’ll tone down when I make it again. It was excellent.

If you’d like to see how the chicken b’stilla worked out for other bloggers, check out their links at French Fridays with Dorie. If you like what you see, you can buy yourself the book and join our cooking group. 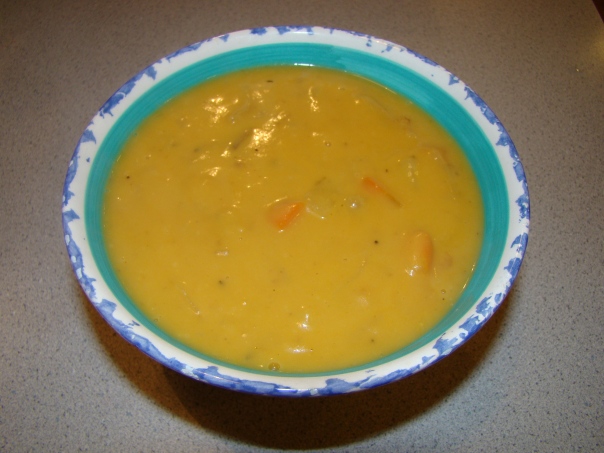 This week, I’m feeling like I live a charmed life.  I’m fortunate to live where I do, when I do, and how I do.  A major calamity would have to happen to make me start to feel sorry for myself.

This musing comes on the tail of the movie and the play that I saw last weekend.  Both have caused me to be sure that regardless of the little inconveniences of life, I am a very lucky person.  I have a roof over my head, a job, and a family I love (human and canine), and quite a bit above and beyond these basics. Who could ask for more.

It started on Friday night when we rented watched the movie Winter’s Bone.  The movie was excellent, but incredibly depressing.  The movie tells the story of a teenaged girl Ree whose father has put their home up as collateral on a bond bail when he was arrested for making crystal meth.  And he’s disappeared.  If he can’t be found, the family will lose the house.  The girl is the only stable part of a family that, excluding the missing drug-dealing father, is made up of a mentally ill mother, incapable of caring for her children, and two younger siblings.  They live in extreme poverty in Appalachia.  Ree sets out to find her father and save her family’s home, running into low-life characters at each turn.  It was a grim story, though Ree’s strength and determination was inspiring.  This movie made me thankful for the life I have.

It gets worse.  On Saturday, we went to the Huntington Theatre to see their current production Ruined, which won the 2009 Pulitzer Prize for Drama.  This play was incredibly powerful, among the best I’ve seen in the years we’ve been attending the Huntington.

The action takes place a bar/brothel set in a jungle in war-torn Congo.  The residents are women whose lives have been ruined by the war around them, both emotionally and physically.  In this world of brutal soldiers, rape is rampant, part of the pillage of the war.  Those that are raped are then shunned from their families and villages. As hard as it is to image, the brothel offers a haven for the girls, where survival in the bush, their only other option, would be tenuous to impossible.  Mama Nadi, the madam, offers a modicum of safety for these girls, as she herself struggles to survive.

The best (and worst) of human nature drive the story, and the horror of the world this introduced me to has stayed with me.  Again, I look around my own world and realize how fortunate I am. Perspective is everything.

Comfort food was called for to rewarm the soul and take the chill off from these chilling realities. I dug up an old recipe for a root vegetable bisque. It’s probably been years since I last made it. We still have a large supply of root vegetables from our winter CSA. This soup starts with the sweetness of caramelized onions, potatoes, parsnips, and carrots. When the sherry and cream are added, it gives the soup the “bisque-y” flavor I love. This soup is only partially pureed, so some chunky vegetables provide contrasting textures in each bite.

Melt the butter over medium-high heat in a large soup pot. Add the onions, and sauté until golden, about 15 minutes. Turn down the heat if they are browning too fast. Add the carrots and parsnips and cook for 10 more minutes. Add the chicken broth, potatoes, and thyme. Bring to a boil. Cover and simmer until th potatoes are tender, stirring occasionally, about 30 minutes.

Puree half of the soup in a blender (in batches, if necessary) and return the puree to the remaining soup in the pot. Stir in half-and-half and Sherry. Season with salt and pepper to taste. Bring the soup back to a simmer before serving.