Guest Blog: A Taste of Morocco 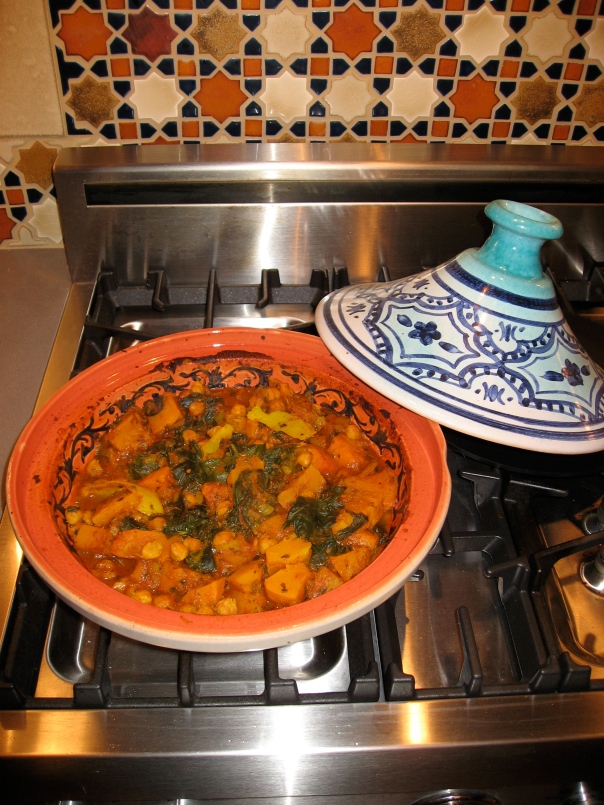 I’m writing a guest post for Betsy, whose blog I thoroughly enjoy and which inspires me. This is also a good opportunity to show off an extravagant kitchen purchase. On vacation in San Francisco last summer, my family and I visited the town of Sonoma deep in wine country.

I walked into a charming cookware store called Bram, their website is: http://www.bramcookware.com  Lining the shelves were every type of clay cookware imaginable, from France, Italy, and Spain in particular. But the most beautiful pots were the tagines, a Moroccan specialty. The word tagine describes both the clay pot with the peaked lid and the dish that is made in it. I can’t describe the unbelievable colors and designs of these pots. I chatted with one of the owners, Ashrf Almasri, who sources the tagines from a trusted Egyptian pot maker, because he can’t yet guarantee the quality of glazes from Morocco and other countries. He spoke eloquently about how nearly every culture evolved clay containers in which to cook food slowly and directly in a wood fire, and how such cooking connects us to our hunter-gatherer past. He also said that over time clay pots impart a subtle flavoring to food.

Needless to say, I had to have one of these beautiful pots. I had it shipped home, and it took me awhile to get around to using it. This is partly because you have to “cure it” in the oven before use, and also because the tall lid means that I have to take out a rack in my oven. However, I did make a lamb shank and white bean casserole, which was pretty good, but not very North African. I wanted spice. I wanted to rock the Casbah.

Finally, I spotted this recipe for a pumpkin and Swiss chard tagine in the Globe magazine that looked promising. It is definitely spicy hot, and it fits the bill for an exotic dish in this gorgeous clay pot.

Adapted from this recipe in Nov. 7, 2010 Boston Globe Magazine,
From Chef Alia Radjeb Meddeb, owner of Baraka Café in Cambridge

Set oven to 350 degrees F. Halve the pumpkin and scoop out the seeds and fibers. Place the pumpkin, cut sides down, on a foil-covered baking sheet. Bake until the pumpkin is just tender when pricked with a fork, 30 to 40 minutes. When cool enough to handle, skin the pumpkin and cut into 2-inch chunks.

In a pot of boiling water, cook the chard for 1 minute. Drain in a colander and set aside.

In a small saucepan, bring 1 inch of water to a boil. Add the lemon peel and simmer 1 minute. Drain and repeat. (Blanching removes the bitterness.) Drain and set aside.

Increase the oven temperature to 400 degrees. In a large Dutch oven or flameproof casserole, heat the oil over medium heat. Add the onion and cook until it starts to turn golden, about 10 to 12 minutes. Stir in the turmeric and ½ cup of the cilantro. Add the tomatoes, cinnamon, 2 teaspoons salt, and ½ teaspoon black pepper and simmer gently for 10 minutes. Stir in the pumpkin, chard, lemon peel, chickpeas, and 2-1/2 cups water or stock (This sounds watery. I used only 1 cup of chicken stock for my 2 lbs of squash.) Transfer the stew to a tagine or a clay pot, if using; otherwise cover the cooking pot and place in the oven. Bake until bubbling hot, about 45 minutes, stirring halfway through the cooking time.

Stir in the remaining ½ cup cilantro and the parsley. The stew shouldn’t be soupy, but if it needs more liquid, add a little water. Taste for seasoning and adjust as needed. Serve hot with couscous or rice. Serves 8 generously.