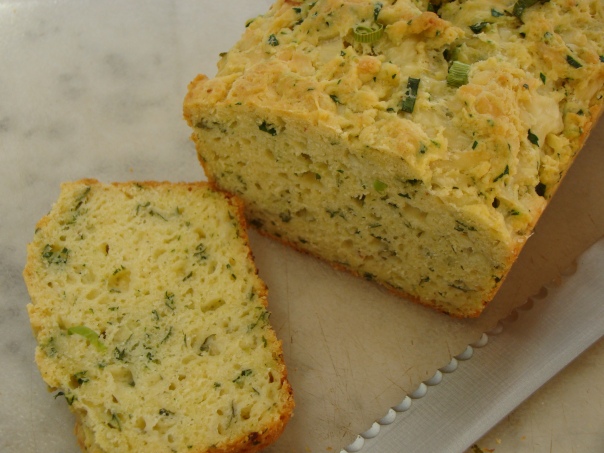 This week’s recipe for French Fridays with Dorie is an herby, cheesy quick bread. The version in the book is called Savory Cheese and Chive Bread, but this is one of those recipes that can be a palette for any variety of “adornments”. Dorie’s Bonne Idees in the margins of this recipe give her permission to substitute, though a read through the recipe also makes it clear it’s that kind of recipe.

I never quite made it to the grocery store this week, but this is a recipe I can make from my usual pantry. The one critical ingredient I was missing was cheese. For some reason, I didn’t have any. The week’s travels did include a stop at Costco, but nothing comes in small packages there. I picked up a (giant) block of a cheddar-like Irish table cheese called Dubliner, which will also be good for snacking.

For the herbal factor, I opted for a combination of parsley and sliced scallions. I also didn’t have any milk, but I had some cream from making soup, so I used that instead, making the bread a little more decadent than it might have been. I left out the nuts and threw in the suggested pinch of cayenne for good measure.

This mixes up to an extremely thick batter. I popped it in the oven and, about half an hour later, just as a wonderful aroma starting wafting towards us from the kitchen, the timer buzzed. The dough was looking lovely with its golden brown top contrasting with the flecks of green herbs, and smelling very cheesy.

The bread was moist with a nice crumb. I liked the flecks of green, the parsley and the scallions, throughout. All of the flavors came through, but I think it could have been even cheesier.

This would be delicious with soup or alongside dinner. I’m looking forward to trying this bread again with different cheese and herbs to match other meals. If I have an hour before dinner, I could make this to serve hot out of the oven.

One of the things I like about the FFwD community is their collective creativity. It’s always interesting to see what someone else has done with the same recipe when they don’t have, don’t like, or cannot eat a certain ingredient. The result is usually something interesting and inspiring. Check out my fellow bloggers links for this week’s recipes at French Fridays with Dorie. As always, you could also get your own copy of the book, Dorie Greenspan’s Around My French Table and maybe you’ll be inspired to cook along.

Next week’s recipe is the intriguing and exotic sounding Beggar’s Linguine. Stay tuned.