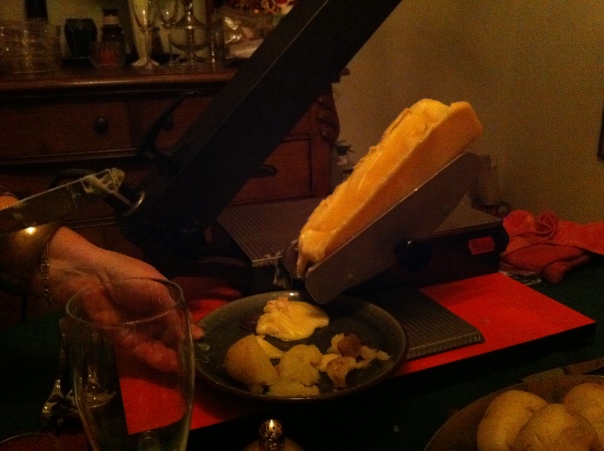 So far, 2011 has been off to a great start! It started New Year’s Eve. We were invited to our good friends Laury and John’s for raclette. Laury’s father was Swiss, and, after many years of talking about raclette, she offered to treat us to this delicious Swiss tradition. Who wouldn’t love a meal centered around melted cheese? 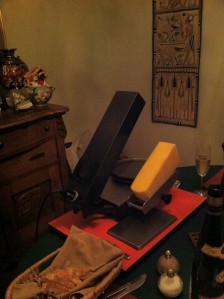 Raclette is a semisoft cow’s milk cheese, mildly stinky with a slightly nutty taste. Laury had a special Swiss machine for melting it, the same one her family had during her childhood. You start with a big block of cheese (they bought a 3 pound hunk). The raclette machine has a serious heating element that can be moved back and forth so you can control the melting. When the heating element is over the cheese, it slowly melts. The cheese sort of rolls down onto the waiting plate (a special raclette plate, according to Laury). We scraped it off to help it along. I read that raclette comes from the French word racler, which means to scrape. The rind was an extra-special treat as it got toasty.

The cheese is served with boiled potatoes, gherkins, and pickled onions. She also served bresaola because she couldn’t locate a source for the more traditional Bundnerfleisch, an air-dried beef.

It takes time for each layer of cheese to melt enough to serve, so it was a leisurely meal, a perfect way to pass the time while we waited for midnight. I also brought a simple salad with beets and walnuts, but we never got around to eating that. We did attack the dessert I made, one of my “signature” dishes – Molten Chocolate Cakes. They were a little heavy after a rich meal with all that cheese, but they sure were delicious.

Generously butter 4 ¾-cup ramekins or custard cups. In the microwave, melt the chocolate and butter at half power, about 2 minutes, checking after 30 second intervals, until stirring it creates a smooth concoction. Stir in the brandy. Cool for 10 minutes, stirring occasionally.

Using an electric mixer, beat the eggs, egg yolks, sugar, vanilla, and salt in a medium bowl, at medium speed, until a very thick ribbon falls when the beaters are lifted. This will take about 6 minutes. The fixture will be pale yellow.

Sift the flour over the egg batter; fold in the flour. Fold in the chocolate mixture. Divide the batter evenly between the four cups, filling each one completely. Cover and chill for at least an hour, overnight is fine.

When you are ready for dessert, remove the cups from the refrigerator 30 minutes before baking. Preheat the oven to 400F. Bake until the tops are puffed and dry, about 12 minutes. Be careful not to overcook or the insides won’t be molten. Cool for 5 minutes. Sprinkle with powdered sugar. Serve immediately. 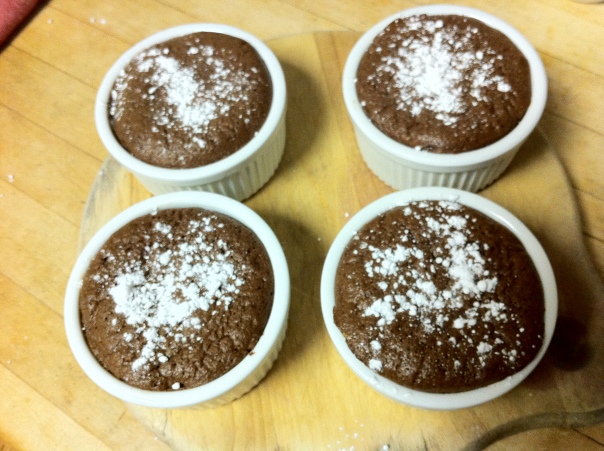