We have another winner in the ongoing tale of cooking from Dorie Greenspan’s new book Everyday Dorie.  With this installment, a double-crust of puff pastry is stuffed with thinly sliced potatoes, garlic, herbs and cream.  What could be wrong with that?

I will quibble with labeling this one as anything close to an “everyday” dish.  It’s not hard to prepare, but it needs to cook for a looooong time.  I didn’t read the recipe thoroughly and didn’t start early enough to accommodate the 2 hour cooking/resting time required AND eat it for that night’s dinner.  I can say that it’s really good reheated the next day and the one after that, so it must be spectacular fresh from the oven.  With all the cream, it’s also rather rich for every day.

Company-worthy, potato tourte is a drop-dead gorgeous.  The burnished crust is the perfect advertisement for the tender melting potatoes inside. 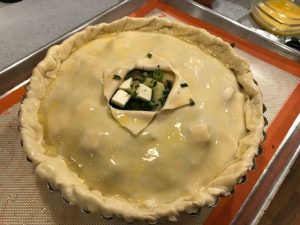 Though the recipe doesn’t specify, I’m glad I opted for a deep tart pan instead of the usual shallow one I use.  Two pounds of potatoes makes a thick pile of potatoes.  If I’d used the shallower pan, only half the potatoes would have fit.

We ate this for lunch with a leafy salad and for dinner with duck confit and asparagus.  There’s a little bit left that we’ll try with breakfast.  Suiting any meal might be an alternate definition of everyday.

You should try this one!  It’s on page 220 of Everyday Dorie.  Check out other opinions at Cook the Book Fridays.

March came in like a lion this year!  On Monday, Mother Nature dropped just over a foot of snow, just in time for the annual Town Election.  School was cancelled and the library was closed, but the election went on.  Kudos to Howard for waking up early enough to snow blow a clear path to the road so I could be on time for my all-day shift as an Election Inspector.  Despite the weather, once the snow stopped, we had higher-than-projected turnout.  Democracy in action!