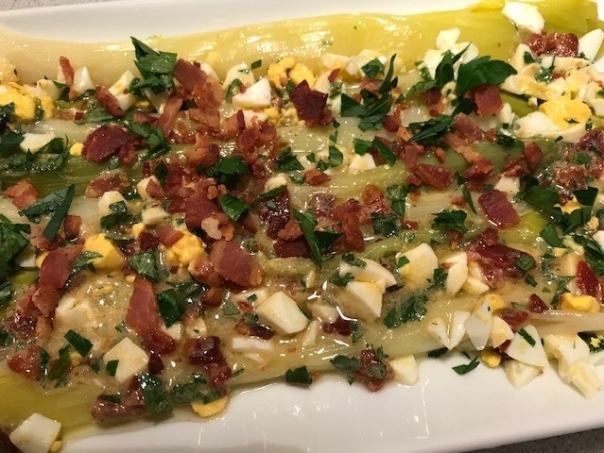 Leeks Vinaigrette.  We’ve seen this one before though the first time for Cook the Book Fridays.  Whole leeks steamed until tender and then doused in tangy vinaigrette.  This version, Leeks with Mustard-Bacon Vinaigrette, from David Lebovitz’s My Paris Kitchen has the added bonus of bacon in the dressing and chopped eggs on top, giving it a breakfast-y feel.

I grew leeks last summer in my backyard garden.  I harvested the entire crop before the ground froze in December and have been steadily working my way through my supply.  The leeks were medium-sized – not the giants found in the grocery store this time of year, but not the pencil-thin ones I love in the summer.  This was a good way to use up the last of my store.

I admit that I’m always a bit baffled by this dish.  It tastes great, but it’s awkward to prepare.  You have the clean the leeks which involves slicing them almost to the root, making them hard to handle.  You need to top off the ends to allow them to fit in the pot.  They don’t really fit in a steamer.  You are supposed to toss the cooked leeks with dressing.  How do you do that?  I found it was more like rolling them around to coat.  I arranged the leeks vinaigrette on a platter, but serving it was a comedy show all its own.  Then, we both sliced the leeks into manageable lengths.  Why not start with that before cooking, tossing, serving, etc.?

So, I made it, we enjoyed it, but I still don’t get it.   Maybe you need to be French to understand…

Try it yourself.  The recipe is on page 88 of David Lebovitz’s My Paris Kitchen. To see what my blogging friends thought of this one, check out their links here.

Posted on 2 March 2019, in General. Bookmark the permalink. 4 Comments.