Happy New Year, my friends! It’s always exciting to leave the previous year behind and start a new one. Actually, I feel this way each time the seasons change, but an excuse to recharge and restart is welcome, no matter how often it occurs. And, the transition from 2014 to 2015 is certainly the most “official” opportunity.

I’m not one for making resolutions. The past few years, I’ve tried to decrease my carbon footprint by giving up something environmentally wasteful, among them plastic grocery bags, paper napkins, sponges, and dryer sheets. This year, I’m going to try to decrease my physical footprint, trying to shed belongings that have built up over the 20 years of living in the same space. I’ve lived in this house for longer than I lived in my childhood home. Yikes! Not moving house also eliminated those natural times to cull the daily detritus that accumulates around me and pick only the necessary to bring to my next home. As a confirmed packrat, I’m sure my family and friends are laughing at my likely failure at my goal, but the pressure is on. 2015 is the year to lighten my load! Thank you in advance for your encouragement and support, not your mockery. (Jane and Jennifer, I’m talking to you. You, too, Howard!)

Welcoming the new year is also the perfect time to celebrate with friends. Howard and I hosted a small gathering of a few friends for a New Year’s Eve dinner. We popped open the bubbly right away. Our friends (and best neighbors ever) Cass and Mark brought some Chambord along with champagne for some raspberry cocktails to start us off. We enjoyed our libations with a variety of freshly shucked oysters, some cheese and crackers, and two different offerings of caviar. My friend Laury topped slices of cucumbers with salmon roe along with sliced hard-boiled egg or dill-flecked cream cheese, in the Scandinavian way. I also prepared aspic with caviar, but you’ll have to wait until next week to hear more about that one.

Happy New Year from my table to yours!
(Clockwise from front: Mark, Howard, Laury, Cass)

At the center of the menu, we featured this week’s recipe for French Fridays with Dorie, Simplest Breton Fish Soup accompanied by my 2014 favorite, No-Knead Bread, and a beet, walnut, and Gorgonzola salad prepared by Laury.

Because this is a brothy soup, I tried my hand at making homemade fish stock. I went to Whole Foods where I’ve seen them filleting fish at the fish counter to see if I could buy some bones. It turns out that they stock the freezer case with bags of fish heads and bones for just 99¢ a pound. I bought the 5-pound frame of a red snapper and made a double batch of stock. Once you’ve procured the bones, making fish stock is a snap. You sauté aromatic vegetables in some butter, then add the fish bones and water and simmer for just 20 minutes. Strain the solids out of the pot and you now have several quarts of gently pure fish flavor. The bones really add substance to the stock because, once chilled, it’s a big gelatinous blob. Fortunately it melts back to liquid as soon as it heats up. 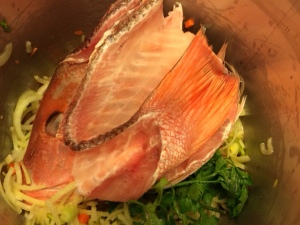 The fish soup itself starts with more aromatic vegetables, including leeks, shallots, onions, celery, and garlic, diced up and sautéed in butter. The stock is added and simmers for a few minutes before adding sliced potatoes. I also threw in a few thickly sliced carrots for extra color. Once the potatoes are partially cooked, bite-sized chunks of fish area added. I used mostly cod with a little oily bluefish for some variety. At the very end, mussels are simmered until they open up. 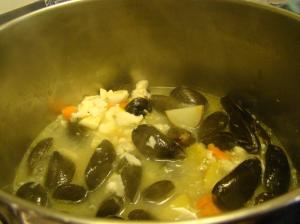 I was confused by the recipe description which called for serving the fish, mussels and potatoes on a plate, served with the vinaigrette, with the broth in a separate bowl. I just ladled the soup in bowls, no separating of ingredients. I passed the vinaigrette around the table, and everyone tried it, but I think we preferred the soup without it. I’ve saved the leftover vinaigrette to use on salad.

My only quibble with the recipe is that the potatoes did NOT cook in time given in the recipe. I didn’t realize they would still be so firm when the fish finished cooking. I cooked everything a little longer, but, the fish ended up falling apart so it was more flaky than chunky and the potatoes were still firm. Next time, I will cook the potatoes separately until they are almost done and add them to the pot at the same time as the fish to allow them to absorb some of the flavors.

This simplest fish soup makes a wonderful meal. Everyone enjoyed it. It works well for company, but it’s easy enough (especially now that I’ve stashed extra fish stock in the freezer) to make on a weeknight. The leftovers are still fine a few days later. I do recommend removing the mussel meat from the shells and discarding the shells before storing.

Our New Year’s Eve dinner ended on a sweet note with Howard’s signature dessert, Pots de Crème. The rich chocolate pudding was just the right touch. I also brought out some leftover holiday treats, Karen’s Cracker Candy and Kathy’s Sea Salt Caramel Biscotti (made by Cass), so friends from both near and far ended up sharing our table as we welcomed the new year.

To read about my Dorista friends’ fish soups, check out their links here. You can find the recipe in Dorie Greenspan’s book Around My French Table or on-line at Google books.

It’s hard to believe that in just a few more months, we’ll have finished cooking all the recipes in Around My French Table. What a wonderful journey it’s been. I know that many of the friendships I’ve formed over the past several years will be lasting ones. In the upcoming months, we’ll be figuring out another project to keep us cooking together beyond the end of this book.

I wish you all a Happy, Healthy, and Delicious New Year!