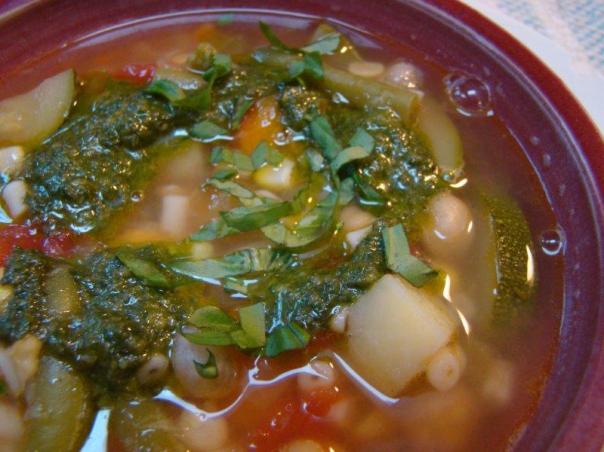 Hot soup isn’t what I usually want to eat during the summer, especially when the weather is hot and humid. The things we do for French Fridays… Even though the temperature didn’t seem seasonal, the ingredient list certainly was, especially with tomato and corn. Between my farm share and a few things picked up at the farmers market, this soup turned out to be a masterpiece of local bounty. I also love anything with chickpeas. 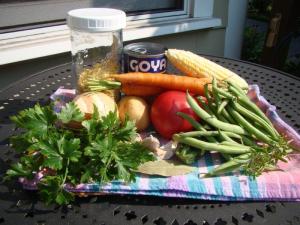 I made one modification when I read Dorie’s warning about the pasta getting mushy when reheating the soup. I made it the morning to serve for dinner that evening, so I knew reheating was in my soup’s future. I chose to cook the pasta separately, cool it down, and keep it in a separate container until later. I just stirred it in when I reheated the soup. It seems to have held up well, not just the night we had it with dinner, but also as leftovers. 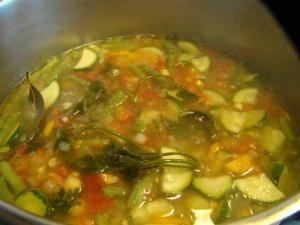 As I mentioned, the soup was a bit too hot for the weather, but it did taste delicious! It was amazing that just 3 minutes of simmering infused the vegetable broth with so much tomato flavor. I also enjoyed the drizzle of pesto (which I made sans Parmesan). Howard’s not a fan of zucchini, so he didn’t love it, but did pronounce it “OK”.

You can check out the other Doristas’ soups by following their links here. You can find the recipe in Dorie Greenspan’s book Around My French Table.

We have a double-header this week. The zucchini plant that I planted about three weeks ago offered up two male blossoms this week. I picked them early in the morning and stored them in the fridge for the evening, when I would make two fried shrimp-filled zucchini blossoms. Unexpectedly, when I stopped by the Belmont Farmers Market in the afternoon, one of the vendors had bunches of pumpkin blossoms for sale, just $4 for just over a dozen, so I bought a bunch to add to my homegrown couple and make it a meal.

I was worried it would be hard, but I was able to pull the stamens out without ripping the blossoms (using tweezers). I stuffed half with shrimp and half with goat cheese mixed with chopped olives and pesto. Other Doristas raved about the batter, and they were right. I loved how it bubbled up and stayed frothy. I’m not a big deep-fryer, but if I were frying stuff again, I’d use this batter recipe. 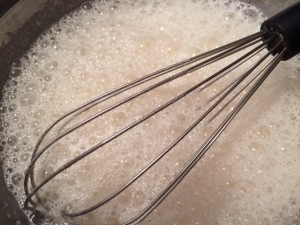 I enjoyed the fried blossoms. I also liked that there were multiple fillings. Once cooked, I couldn’t remember which were which, so the surprise on the first bite of each was fun. I’d make these again, as a once-a-year treat, if I come across blossoms again next summer. 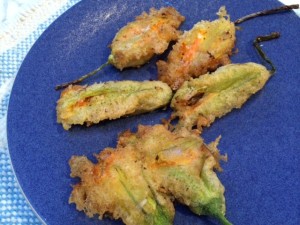 As a final note, I spent last weekend hanging out in New York City with Kathy, Cher, and Diane. What a blast! Diane already posted about our adventures here, so I won’t repeat, but I will include a photo of the four of us getting ready to go into Chelsea Market (This is Kathy’s picture, I won’t take credit). Here’s to more Dorista meetups in the future. 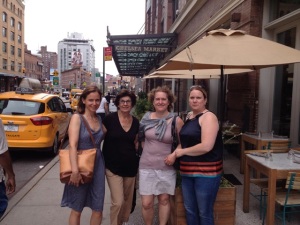