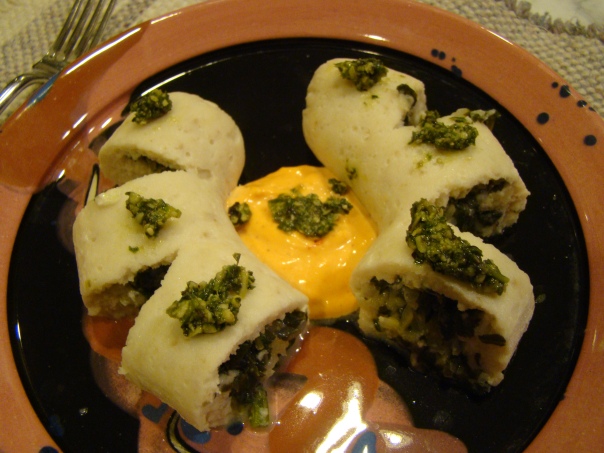 It’s been a tense week since the tragic events on Monday. We know people who were in the area of the Marathon’s finish line minutes, or seconds, before the bombs went off, though everyone I know is safe. I hope that everyone you know is safe as well. Let’s all keep the victims and their families in our thoughts as they face the long road of healing of them.

As I sit here writing this post, I’m riveted to the radio as the latest news about the Boston Marathon bomber manhunt unfolds. I live in a town that borders several of those that are “locked down” and have settled in for a day at home. Our workplaces are closed (though I’m not working today anyway), and it all just seems surreal.

Many thanks to those of you who reached out to check on me. It makes the world feel like a smaller and nicer place than it often seems to be.

This week’s recipe for French Fridays with Dorie gave me a project to distract me. When I’m stressed, I like to cook, and make a big mess. Fish and spinach roulades filled the bill for that. I don’t think I read the recipe beyond the title before I made my grocery list. I had envisioned something along the lines of fish fillets rolled up around a spinach filling. I was wrong about that. It was much more sophisticated.

First, I noticed the filling used preserved lemons. I’ve always meant to make them myself, but you need to plan about a month in advance. Tuesday was too late. Fortunately, I’ve had good luck with Mark Bittman’s Quick Preserved Lemon, ready in just 3 hours, so I made two lemons’ worth, some for this recipe, and some for later. The filling is made from baby spinach wilted with sautéed onion and garlic and then mixed with preserved lemon. 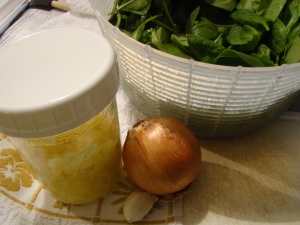 The fish wasn’t whole fillets at all. It’s a mousse-y mixture of fish, egg whites, and heavy cream, like a quenelle (though I’ve never had one). The recipe called for cod, but I went for pollack instead (sort of cannibalistic as that is my last name), which is a white-fleshed fish but less expensive. The ingredients are pureed in the food processor to make a sticky paste. 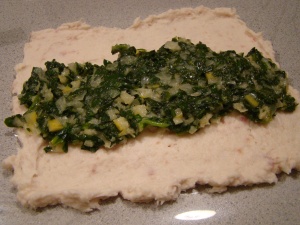 Then the fun begins. The roulades were like a craft project. First, you lay out a piece of plastic wrap. Then you spread the fish paste into a rectangle. Center a strip of filling on top of the fish, and then roll into a sausage. Finally, you wrap the roulades in the plastic and twist the ends to tighten. After I was done, I realized that using a bamboo sushi mat would have made this even easier. To cook, the roulades are steamed for ten minutes. Then you remove the wrap, slice and serve. 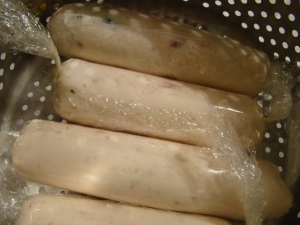 Tomatoes aren’t in season, so I wasn’t tempted by the suggested optional sauce. Instead, I used the two egg yolks and made rouille, a red-pepper spiked aioli. It was sort of thick, but tasted good with the fish roulade.

Dorie suggested cut these into a fan shape, so I tried that, but I think slices would be prettier. I served my roulades around a large dollop of rouille and then dotted with pesto.

These were good, but I’m not sure I would make them again. I had one roulade for dinner, but I think they would make a better starter or light lunch. Leftovers for lunch!

You can find the recipe for these roulades in Dorie Greenspan’s book Around My French Table. To read about the other Doristas’ roulades, follow their links here.

Keep yourselves safe this weekend!