French Fridays with Dorie: Pumpkin Stuffed with Everything Good 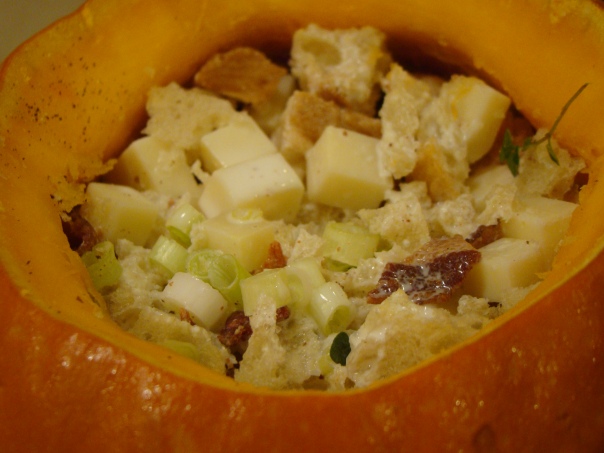 Is it already Friday again? Is Friday really almost over? This week’s challenge for French Fridays with Dorie was Pumpkin Stuffed with Everything Good.

I loved the way this recipe sounded, but I was a little wary because I had tried a similar recipe from Ruth Reichl a few years back which, though it sounded amazing, it turned out flat and flavorless – disappointing to say the least. Melissa Clark also mentioned a Cheesy Baked Pumpkin in In the Kitchen with a Good Appetite, which I read over the summer, so this sort of recipe was on my mind. I’ve never been one to give up on a delicious sounding idea, so when this recipe turned up on the list for this week, even though this recipe sounded similar to my previous failed effort, I wasn’t discouraged.

It was challenging for me to fit making this week’s recipe into my schedule. I wasn’t able to make it over the weekend, and with a 2 hour bake time, and wanting to eat dinner at a reasonable time, I wasn’t sure how to make it work. I ended up dicing up ingredients on Night #1, stuffing and baking the pumpkin on Night #2 and reheating said pumpkin in the microwave on Night #3. Not ideal, but it kept me in the game.

I have to say how surprised I was at how SMALL a 3 pound pumpkin is. Maybe mine was small because it was extra dense. I know that I couldn’t cut off the cap with any of several substantial kitchen knives I tried. I ended up using the little saws that come with the kits at the grocery store for carving fancy Jack-O-Lanterns. And, I broke two of them. Mine was one tough pumpkin.

I didn’t stray from Dorie’s suggestions for the filling: stale bread, diced Gruyère, crumbled bacon, thyme, scallions, and garlic. This went into the hollowed out sugar pie pumpkin and was doused with nutmeg-flecked cream. See what I mean about sounding amazing.

The filling was about twice as much as would fit in the cavity (I told you it was small). I put the remaining mixture in an oiled shallow baking dish, poured cream over it, covered it with foil, and baked it alongside the pumpkin for an hour.

My (small) pumpkin only needed to bake for 90 minutes for the flesh to become tender. The sides were actually still quite stable and upright. We had already eaten dinner while it baked, but I did sample the baked filling in the dish. It was crusty and cheesy and delicious.

Tonight, we ate the actual stuffed pumpkin for dinner. It was much better than my earlier failure, but I’m not in love with it. I’m thinking that if I try it again, I might dice up the pumpkin, or perhaps an easier-to-peel winter squash, combine it with the filling, add some cream and bake it like I did the extra filling for a hearty side dish.

I might have mentioned before how much pleasure I get out of cooking something good to eat from the discarded elements of a dish. I make applesauce from peels and cores, and, of course, there’s stock from vegetable peelings or chicken bones. For a snack, I tossed my pumpkin’s seeds with olive oil and a little za’atar and roasted them for about 15 minutes. Yum! 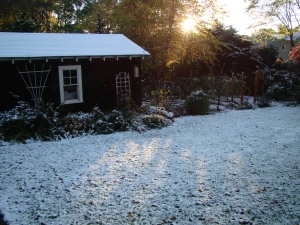 Finally, I wanted to mention the surprise October dusting of snow we got last night into this morning. It was gone by the end of today, but unusual nonetheless. Why do they call it Global Warming? We haven’t even had our first frost yet this fall. Climate Change seems to be the better term.

Find out what the other FFwD bloggers thought about the cheesy pumpkin. Last week, I accurately predicted a mixed bag due to the pissaladière’s anchovies. This week, I anticipate a lot of swooning. You can see for yourself here. We’re asked not to include the recipes in our posts, but the recipe can be found here You can also find this and hundreds of other great recipes in Dorie Greenspan’s book Around My French Table