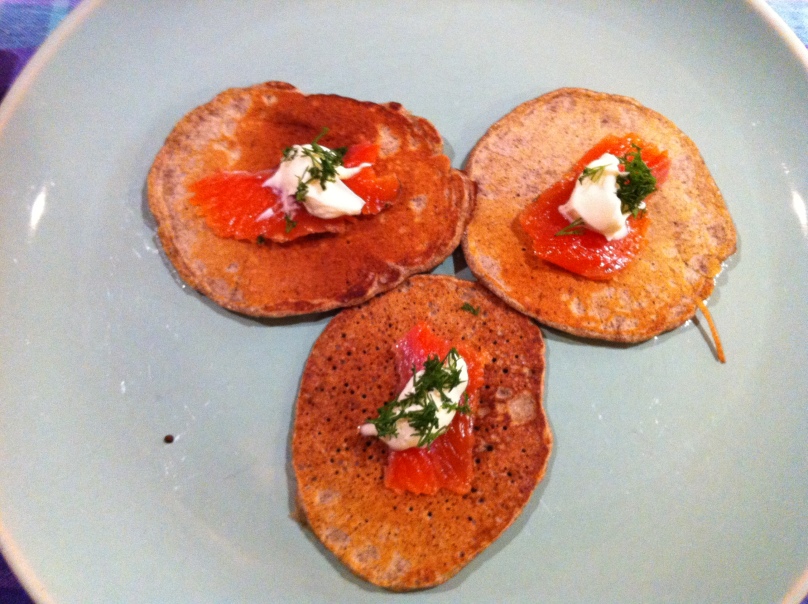 This week flew by. I can’t believe it’s already Friday again. It seems like I haven’t been writing any posts except when it’s time for French Fridays with Dorie. I’ll have to work on that…

This week’s recipe for the cooking group was Buckwheat Blini with Smoked Salmon and Crème Fraîche. This one could go in one of two directions: appetizer or brunch entrée.

I planned ahead and convinced my husband Howard to make gravlax. He’s been doing it for years and it always comes out perfectly. We bought half of a wild Alaskan salmon, ate some for dinner, and he cured the rest. A few days later the salmon was ready. I had the best of intentions of making my own crème fraîche, but my forethought didn’t extend to myself. Typical.

The blini are made from a yeasted buckwheat batter. It needs to sit for at least 60 to 90 minutes to get the rising action going. Since I chose to try this for brunch, I made the batter the night before, letting it sit out for 90 minutes at room temperature, then stashed it in the refrigerator for the night. I was a little worried because my foil packet of yeast didn’t quite measure the 2 teaspoons called for in the recipe, but I had major bubble action, so it was fine. 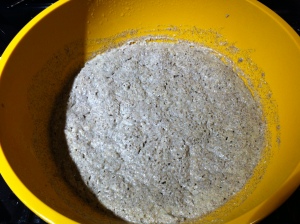 In the morning, we made lots of little pancakes. Each pancake was dolloped with crème fraîche, topped with a slice of gravlax, and sprinkled with some dill. (I forgot to look for salmon roe, which would have been a nice addition.) They made a lovely presentation. 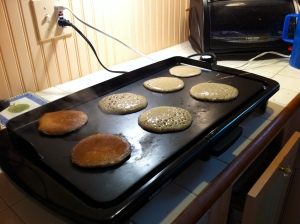 We thought the blini would make a better appetizer than brunch. First of all, it felt more natural to eat with your fingers than a fork, which seems more like an appetizer. Then, to fill up, you would need to eat a lot of blini, so again, it seemed like a better appetizer. Finally, I think the earthy, tangy taste of the blinis themselves were such a contrast to buttermilk breakfast pancakes that they suffered by the comparison. They would have shined as an appetizer. Conclusion: I liked this dish, but served it for the wrong meal.

I’m also excited to be able to experiment with the rest of the bag of buckwheat flour. I found a nice selection of recipes to try on Heidi Swanson’s 101 Cookbooks blog. The figgy buckwheat scones look especially appealing. This link will give my search results.

For the cooking group, we don’t publish the recipes. For that, you’ll need to check out Dorie Greenspan’s book Around My French Table. You won’t be sorry. What did the other FFwD bloggers think of the blini? You can see their links here and find out for yourself.

Next week, something I’ve wanted to try for a long time: Pissaladière!