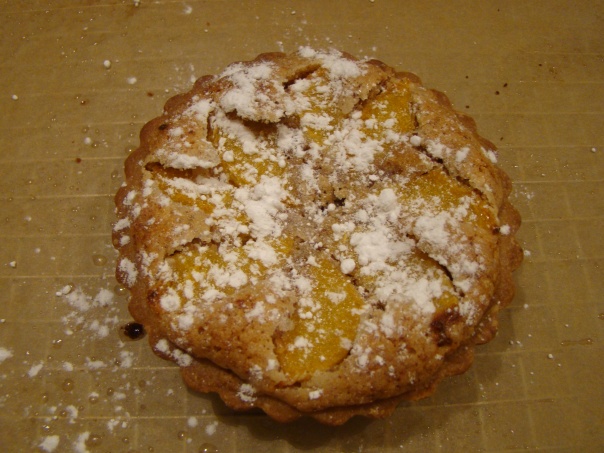 This week’s recipe for French Fridays with Dorie was billed as a good choice for Valentine’s Day. Unfortunately, my Valentine and I don’t have compatible dessert preferences. His preference is for anything chocolate. My preference leans more towards tarts and other fruit desserts. When I mentioned that I was making an Orange-Almond Tart this week, he turned up his nose.

On the other hand, this recipe was very appealing to me. It was a tart, it was fruit, and the frangipane filling sounded great.

The tart had several components, the crust, the filling, and the fruit. Each of the different parts needed time to chill or otherwise rest. That made it workable for me to prepare the crust and filling and orange slices one night and quickly put them together for dessert the next.

Because Dorie said the tart was best eaten the day it was made and I had no occasion this week to be bring a full-sized dessert somewhere to share, I chose to use my mini-tart pans to make crusts for three personal tarts for me. I made and consumed one little tart earlier this week. And I’ll make the others during the weekend.

I enjoy making pastry crusts. Cutting a stick of butter into small pieces used to be the most tedious step, until I figured out this method. I cut the stick of butter into quarters, but cutting it in half lengthwise, then turning it and cutting in half lengthwise again. Then, keeping it together as a stick, I slice the entire stick using the handy-dandy butter slicer like the one my mother used to use to make butter slices for guest dinners. Voila! Small pieces of butter! Often, I’ll spread them around on the cutting board and put it, butter and all, into the freezer for 5 to 10 minutes for the butter to firm back up before proceeding. 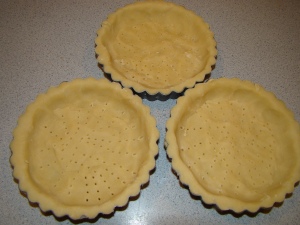 The shortbread crust came together easily in the food processor, and then I pressed it into my mini-tart pans. I’m not afraid of a rolling pin, but I loved the tactile step of working with the crust this way. The crusts went into the freezer for the night.

The almond filling was awesome. Such a fancy looking filling for such little effort. I’ve made a similar filling before with almond paste, but this was much easier, with even nicer flavor, and I didn’t have to make a special trip to the store for ingredients.

I was a little surprised that the fruit was more of a garnish that part of the filling. I filled my tartlet with the almond filling and arranged the oranges on top. The filling was too firm for the fruit to nestle. For the full tart, the recipe called for 4 oranges. On my mini-tart, I could only fit the slices from less than half an orange on top. It was fine, but I’m just saying it surprised me that I didn’t use much fruit after all.

End result? I give this tart an A++. It was everything I like about a dessert. In the looks department, I impressed myself. , The tart looked like I had picked it up at an upscale bakery, not made it in my own kitchen.

I’m excited that I can experiment this weekend with the two mini-tart shells I have left. I think I’ll try one fruitless, just the frangipane with sliced almonds on top. Maybe my Valentine will even try that one.

I know I’ll use both this crust recipe and the filling in other desserts that I make. I’m thinking the filling would be great made with hazelnuts instead of almonds. The tart has displaced the Speculoos as my favorite recipe from Around My French Table so far. I think it’s so funny that my favorites from this book have been desserts because I am much more of a cook than a baker.