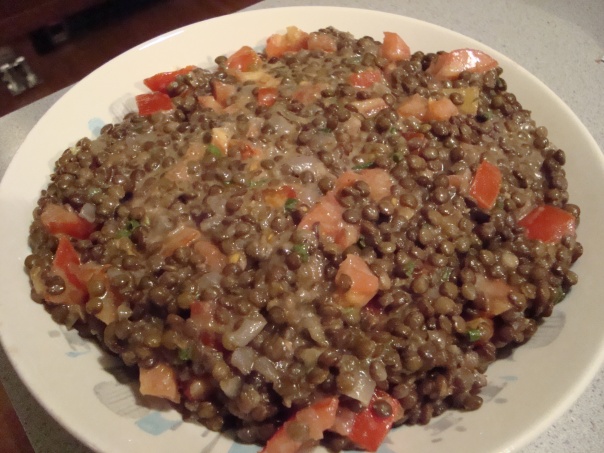 I splurged on a basket of Backyard Farms tomatoes, grown hydroponically in Maine. They taste pretty good for April. I wouldn’t go so far as to compare them with freshly-picked heirloom tomatoes in the summer, but they are good treat during the lull between now and July.

Maybe it was a little indulgent. I didn’t realize how many tomatoes were in the basket. We’ve been enjoying them simply sliced with our summer spiced salt blend (salt, black pepper & cayenne), and in the Israeli Couscous Salad I talked about last week. Today, I made lentil salad with tomatoes.

I love lentils. They are my favorite kind of bean (chickpeas are a close second choice). I especially like the little green lentils. For salads, they hold their shape better than the brown ones from the supermarket. I get them in bulk at Whole Foods. Sometimes, they are labeled as Le Puy, and, sometimes, they are labeled as French lentils. They are always tasty.

The tarragon and chives in the herb garden are going great guns. Both go well with lentils, so I threw those in too.

Here’s what I did:

Combine lentils, onion, and bay leaves in a saucepan. Cover with water, 1 inch above the surface of the lentils. Bring to a boil, then reduce heat to a simmer. Cook until lentils are tender, but not mushy, 20 to 30 minutes. Drain, and cool slightly.

Combine lentils, diced tomatoes, and dressing. Snip the chives with scissors over the salad and toss again.

In the blender, combine vinegar, mustard, and oil. Add tarragon leaves and combine until they are more chopped, but not until everything turns green. Season to taste.