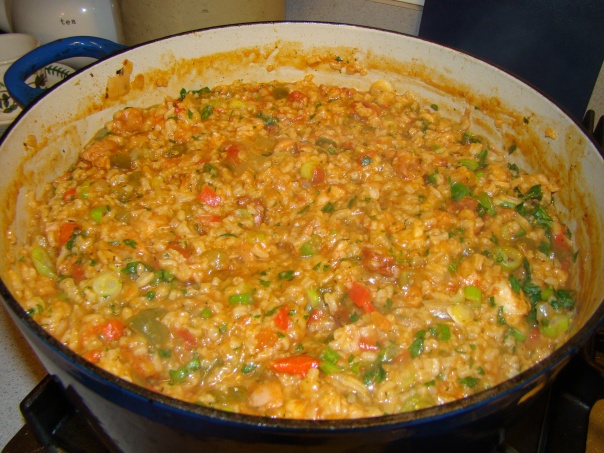 Another food holiday we always try to observe is Mardi Gras because I love the food from New Orleans.

We visited the city, pre-Katrina, in December 1994. We enjoyed staying in the French Quarter, breakfasting at the French Market, browsing the antique stores on Magazine Street, and visiting the Garden District. The National Park Service offered great tours as New Orleans is considered a National Historic Site. We even happened upon a house tour in the Garden District, so we were able to visit 3 or 4 private homes.

The food was amazing, and there can’t be anywhere in the world quite like Bourbon Street. I am not a big drinker, but you’ve got to love a place where the bars along the street are mostly take-out. I don’t remember seeing many places where you could sit down and enjoy a drink. It was more like drink-and-stroll. It still makes me laugh to think about it.

One of the reasons we bypassed the Louisiana chili for the Super Bowl last week was because Mardi Gras was right around the corner.

I think my favorite New Orleans dish that I can make at home is jambalaya. (French Market beignets and oyster po-boys would beat jambalaya, but I’m afraid to deep-fry at home.)

I’ve made many different recipes for jambalaya, and it seems to be a no-fail dish. I mentioned to my sister Jane what I was thinking of making. She sent along her recipe, which originally came from an Emeril Lagasse cookbook. She’s made some modifications, and I made some of my own.

Toss the chicken with 2 Tbsp Emeril’s Essence. Heat the oil in a large heavy pot (I use my Le Creuset Dutch oven). Add the chicken pieces, and cook for 5 minutes, until lightly browned. Remove chicken from the pot and set aside.

Add the thyme, stock/tomato liquid, and cooked chicken. Bring to a boil. Reduce the heat, and cover the pot. Simmer, stirring occasionally, until the rice is tender. Not all of the liquid will be absorbed.

Toss the shrimp with the 1 Tbsp Emeril’s Essense. Add the shrimp to the pot and stir. Cook until the shrimp turns pink and is opaque, about 5 minutes. Remove the pot from the heat, and let it rest, covered, for about 15 minutes.

Gently stir the scallions and parsley into the jambalaya. Remove and discard the bay leaves.