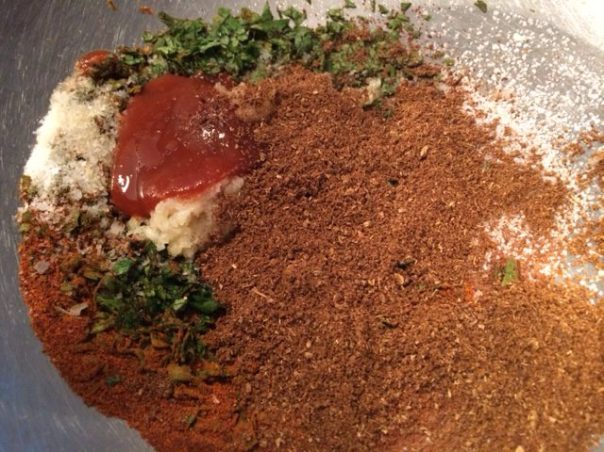 This week’s recipe for Cook the Book Fridays is Spiced Meatballs with Sriracha Sauce.  The meatballs are made from a highly-spiced mixture supposedly similar to merguez sausage.  I don’t think I’ve ever had merguez so can’t compare.  When I described the recipe to my sister Jane, she said “It sounds like it uses everything in the pantry!”

Lots from the pantry, but not everything

It didn’t need everything in the pantry, but the ingredient list is long indeed.  Coriander seeds, fennel seeds, cumin seeds, paprika, cinnamon, allspice, and sumac from the pantry plus garlic, cilantro, and Sriracha.  All these seasonings are mixed together with ground meat.  I opted to use ground lamb.  We had a beef-heavy week, and my palette longed for something different.

This recipe is intended as an appetizer, but I decided to turn it into a meal.  For carefree cooking, I ended up baking the meatballs while I prepared the rest of the menu.  The North African meatballs with the two sauces were delicious with couscous and sautéed greens on the side.  All the different flavors came through.  The meatballs were moist and complex with a bit of a kick, but not too spicy. 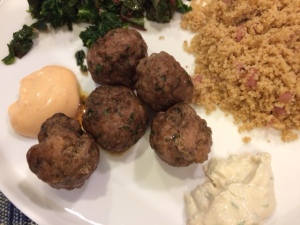 I thought the Sriracha sauce might be too spicy for Howard so I also made the Yogurt-Tahini Sauce.  I don’t know whether this is true at all grocery stores, but when I tried to buy a small (individual) sized tub of plain yogurt, I discovered that the yogurt section at my local store is at least 90% Greek yogurt.  Any available tubs of the thinner “regular” (non-Greek) yogurt I was trying to buy were fruit-flavored.  No worries: Greek yogurt works just fine.  And, much to my surprise, Howard preferred the Sriracha sauce while I was on Team Yogurt-Tahini Sauce.

I was away the week of our last CtBF post.  Howard and I spent a fun-filled week in Québec.  We enjoyed wandering in both Montreal and Quebec City.  The food we ate everywhere, highbrow and low, was amazing.  In Quebec City, we ate at Restauarant Toast! whose tagline is the name of my blog, in French!

A Plateful of Happiness

I didn’t get a chance to make the Cherry Tomato Crostini with Herbed Cheese until after our return.  I’m sorry that I procrastinated.  I loved every part of the crostini, separately and together.

For the herbed cheese, I already had Greek yogurt (cow’s milk) so I didn’t bother to seek out goat’s milk yogurt.  And I skipped the straining step since the Greek yogurt has already been strained.  The yogurt is flavored with garlic and assorted fresh herbs which is a delicious spread, not only on the crostinis, but also alone on crackers.

The cherry tomato topping was also fabulous.  My cherry tomato has been slow to ripen, but I found a colorful assortment at a local farm. The sweetness of the cherry tomatoes concentrated during roasting and melded with the fragrant herb sprigs for a meltingly wonderful mélange.

Toasted rustic bread (I used ciabatta) is the base for a layer of herby cheese crowned with roasted cherry tomatoes.  It’s summer on toast. 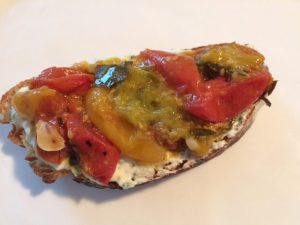 I liked the topping so much that I have plans this weekend to make another batch for a savory tart.  Can’t wait.

Click these links, if you’d like to read about others’ experiences with spiced meatballs or tomato crostini.  To make them yourself (which I highly recommend), you can find the meatball recipe on page 74 and the crostini recipe on page 110 of David Lebovitz’s My Paris Kitchen.