Sunshine in a Jar

In 2016, I became mildly obsessed with fermentation, mostly cucumbers and cabbage, but also sourdough bread.  Kitchen experiments are my idea of a good time.  When I saw that Marisa McClellan at Food in Jars was hosting a Mastery Challenge of food preservation in 2017, I signed on.  Each month will focus on a new preservation technique.  I’m excited to practice and learn how to extend the seasons with some new tricks.

First up for January is Marmalade.  I’ve made my own jams and jellies from summer fruits, but marmalade is something I always purchased.  I was excited to experiment.

Marisa’s post on how to make small-batch marmalade starts with a ratio.  I love ratios.  It allows you to create your own recipes confidently.  I liked the idea of whole fruit marmalade, where the entire fruit is used (rind, juice, pulp, membranes, everything except for the seeds).  The ratio for whole fruit marmalade is 1:1:1 (fruit, sugar, water).

I was hoping to make marmalade with Meyer lemons, but I couldn’t find them, so I started with organic lemons instead.  The first step is to cook the fruit until it is tender, then let it cool in the cooking water.  Once cooled, the fruit is halved and the pulp is scooped from each half into a bowl, discarding any seeds.  A grapefruit spoon does a thorough job at this step.  The empty halves are quartered (through the ends) and each wedge of rind is thinly sliced and added to the bowl.

Time to cook it all into marmalade.  Based on the 1:1:1 ratio, equal weights of prepared fruit, sugar, and cooking water are combined.  I also added some elderflower cordial that I made this summer because I like the way its floral notes complement the tart lemon flavor.  The mixture is brought to a boil, then simmered until the marmalade reaches a temperature of 220F and passes the cold plate test.  In a wide sauté pan, it took about 25 minutes to perfection.  And while the marmalade cooked, I sterilized my jars.  When the marmalade was ready, I ladled it into the hot jars and processed for 10 minutes. 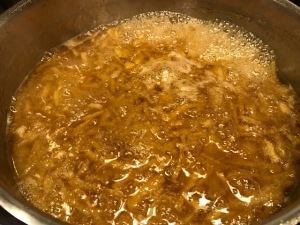 The cheerful yellow color of the marmalade is the perfect antidote for raw and gloomy cloudy winter day.  The contrast of the sweet and tart flavors help too.  I made a batch of lemon-ginger scones to enjoy with the first jar.  My batch made 4 half-pint jars so I’ll share one or two.

Whole fruit marmalade is only one style.  In addition to keeping my eye out for interesting winter citrus to further my experiments, I also want to try the less bitter cut rind style.

Place the lemons in a medium saucepan, and cover them with water (4-6 cups).  Bring the water to a boil, then reduce the heat to low, cover the pot, and simmer until the lemons are fork-tender, about 35-45 minutes.  Remove from heat and let everything cool.

Once cool, remove the fruit from the pot.  Reserve 2 cups of the citrus cooking liquid.  (DO NOT DRAIN THE POT WITHOUT SAVING THE LIQUID YOU NEED.)

Cut the lemons in half through their equators.  Use a grapefruit spoon to remove the pulp, and add it to a large bowl.  Discard any seeds.

Cut each lemon half into quarters (through their poles).  Thinly slice each wedge and add to the bowl.

Start sterilizing your jars in a water bath.  I like to add an extra jar plus a 4-oz jar just in case the yield is higher than expected.  Place a couple of small plates in the freezer.

Transfer the bowl of pulp and rind to a wide, deep skillet.  Add sugar, elderflower cordial, and reserved cooking water and stir to combine.  Bring to a boil, then lower heat a bit, but make sure the mixture is still boiling steadily.  Cook, stirring frequently, until the mixture reaches 220F, about 20-25 minutes.  As a backup, remove from the heat and do the cold plate test to verify doneness.

Remove the jars from the water batch.  Drain the water back into the pot.  Fill them with marmalade, leaving ½-inch headspace.  Wipe the rims with a damp paper towel, and put on lids and rims.  Return the jars to the water bath, bring the water back to a boil, and process for 10 minutes.  Start timing when the water returns to a boil.

Remove the jars to a cooling rack.  You should hear the lids pop to seal.  As the jars cool, be sure to check the seals.  Refrigerate any unsealed jars. 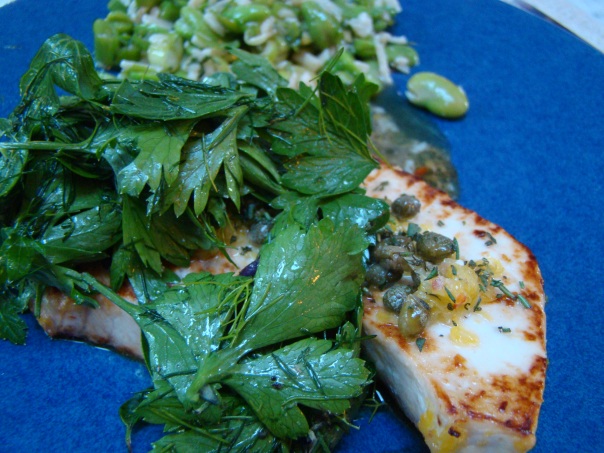 This week’s recipe for French Fridays with Dorie is Mediterranean Swordfish with Frilly Herb Salad. I do love fish, any kind of fish. Normally, fish at my house is grilled in the warm months and broiled in the cooler ones.

A fishmonger is one of the vendors at our weekly farmers’ market. They had swordfish on offer, fresh from the pier that morning. In addition, a large bunch of parsley and some dill were part of my weekly CSA share at another farm. Those fresh herbs plus a few perennial herbs (thyme, oregano, savory, lemon balm) from my backyard garden rounded out what I needed to make this meal.

The fish briefly sits in a lemony-capery marinade that reminded me of the sauce for chicken piccata (though I forgot to add the onion). While it soaks up the flavors for an hour, you can use some of that time to clean and destem the herbs for the accompanying salad garnish. I loved that the salad used whole leaves of the parsley and other herbs making this step quite simple. 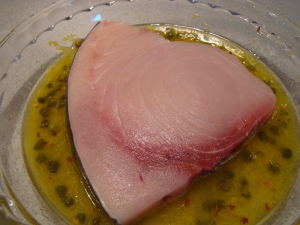 This recipe gave a grilling option, but I am not the family griller. I was in a hurry the night I prepared this dish so I following the instructions in the recipe and pan-seared the fish instead. What a pleasant surprise! This was practically fast food. The swordfish cooked quickly and to perfection after just 5 minutes in the pan. The steaks had a lovely browned crust, and the tangy sauce (the marinade heated up) was delicious.

Just before serving, the herbs are tossed with a little olive oil and lemon juice. The fish is topped with sauce, and then the herb salad, which makes an impressive plating. I made a fava bean salad to fill out the plate. More on that later this weekend.

As with so many recipes in this book, I will make this one again, both as a whole and just its individual components. This new (to me) way of making fish will come in handy on a harried evening and in the winter when the grill is not an option. The herb salad is something easy made from things I always have around, especially with an herb garden just outside the kitchen door. I look forward to experimenting with different combinations.

I was AWOL last week. Endless exhausting heat and (not exhausting or endless) weekend visitors proved too much of a distraction to get it together to either shop for the ingredients for this summery dessert or, having skipped it, reading my colleagues posts. I made a third of the recipe and enjoyed two mini-clafoutis (or would that be clafoutettes) myself yesterday. I plan to catch up on posts when I check out everyone’s swordfish this weekend. 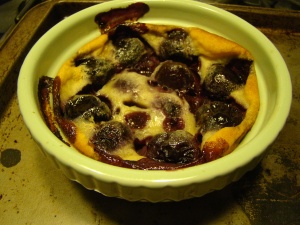 We don’t post the recipes, but you can find it in Dorie Greenspan’s book Around My French Table. To see what other Doristas thought of this recipe, check out their posts here.