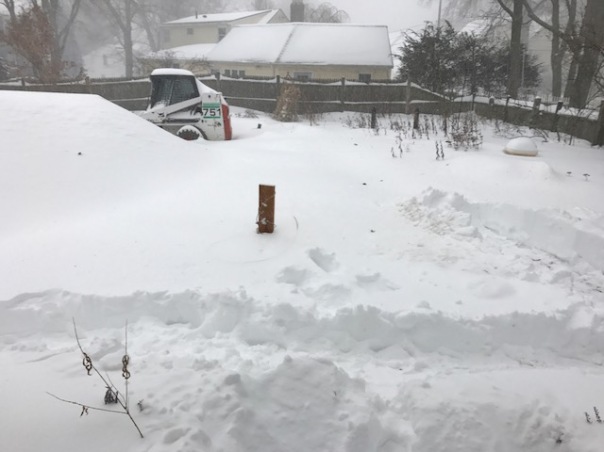 Happy New Year!  Greetings from the Arctic Circle!  Well, not really, but it sure feels like it.  Yesterday, we had a wild storm that left us with nearly a foot of freshly fallen snow and winds that blew the snow into even higher drifts.  Today the sun came out, so everything is beautifully sparkly, but the temperatures are dropping rapidly and tomorrow, we’ll be living with a single digit high and a negative double digit low, not counting the expected wind chill factor.  Brrrr!

Cold weather doesn’t keep me inside because the dog must go out.  She has a natural fur coat, though the snow piled in her favorite spots and our paths to safe walkways frustrate her.

This hearty side dish couldn’t be easier.  First, diced potatoes are parboiled to hasten the cooking.  I didn’t bother to peel them.  Then, the potatoes are cooked in a few tablespoons of duck fat.  The duck fat I had leftover from the Counterfeit Duck Confit was gorgeous, clear, and golden.  The potatoes browned beautifully.  Salt them halfway through and stir in a few cloves of minced garlic at the end.  Delicious!  I also tried them with leftover turkey fat from Thanksgiving.  Both the duck and turkey fat add a depth that olive oil just does not.

The potatoes require a little attention, some stirring so they don’t stick to the pan and burn.  But your undivided attention is not required, so you can prepare the rest of dinner while the potatoes cook.  Roasted chicken parts are a simple accompaniment, or some more counterfeit duck confit.

If you’re on the East Coast, stay warm this weekend.  Don’t go out if you don’t have to.  While you’re home you might as well bake some cookies and perhaps make a batch of duck-fat potatoes!

The recipe can be found on page 220 of David Lebovitz’s My Paris Kitchen.  Other Cook the Book Fridays participants thoughts on the potatoes can be found here.

I might have mentioned that in December, I participated in Whole Foods “12 Days of Cheese”.  Each day, a different cheese was on sale for 50% of its regular price.  If you tried all 12 cheeses, the prize was… a cheese platter!  For someone who loves cheese as much as I do, how could I not do it?  It also required a daily trip to Whole Foods, but I also happen to love grocery shopping, so that wasn’t a hardship.

There were some delicious cheeses available.  Some were old favorites (Humboldt Fog, Vermont Creamery Bonne Bouche, Epoisses), and now I’ve met some new ones (Truffle Gouda).  The only problem was the timing.  The cheese platter had to be redeemed before New Year’s Day, when the refrigerator still had blocks of several of the daily selections I purchased uneaten.  And the cheeses on the cheese platter were rather pedestrian, not nearly as interesting as the flight of 12 days offered.  Regardless, it was a fun food adventure even if I don’t need to eat quite so much cheese… 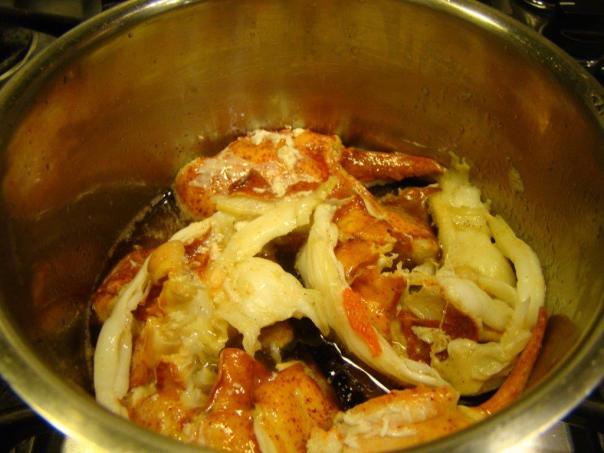 Greetings from the frozen white tundra!

For years, we’ve used Valentine’s Day as an excuse for a special homemade dinner. The menu varies from year to year, but it’s a nice tradition. Vanilla Butter-Braised Lobster, this week’s recipe for French Fridays with Dorie turned out to be the star of a perfect romantic meal.

I live in New England which is “Lobster Country”, so finding a lobster without breaking the bank was not an issue. The plan was to spend the long weekend in Maine where the lobster would be even cheaper, but yet another snowstorm kept us off the road and safely nestled at home.

Local lore tells that, once upon a time, lobsters were so plentiful that they were cheap and eaten mainly by the poor. In fact, I’ve heard one story where inmates in a prison revolted because they were so tired of a daily menu of lobster. Lobsters have come a long way to become the luxury food it’s now considered to be. Because they are still caught locally, we enjoy lobsters all year long, especially summer weekends in Maine where we eat it at home on a picnic table on the porch.

Lobster is so good steamed or boiled in its shell that I’m not sure I’ve ever had it as a fancier preparation. Sure, we’ll cook an extra one or two to make next-day lobster salad with the meat. Or I’ll often save the shells and bodies to make a simple lobster bisque (more on that this weekend). Beyond that, steamed lobster is my favorite way to go. It’s so rich, we don’t even bother dipping it in melted butter.

The French Friday recipe, though very simple to prepare, was much more elegant than our usual “lobster in the rough”. First, you clarify some butter. Once clarified, the pulp and pod of a vanilla bean infuses in the butter while the lobster is cooking. Finally, after shelling the lobster to extract the claws and tail, the lobster meat finishes cooking in the vanilla butter bath. The lobster is plated (without all the butter) and sprinkled with fleur de sel and fresh pepper. Simple yet fancy at the same time.

I made a few minor adjustments, but all in the same spirit of the recipe.

First, it turns out that lobster must be popular Valentine’s Day fare because when I went to the grocery store on Saturday morning, all the smaller lobsters were sold out. The fish guy had a 3½ pounder, which was big enough to share, so I brought her home instead. At $8 a pound, it was still a good deal. Because of the size of the lobster, we changed up the cooking method a bit. Instead of partially cooking it then ripping it apart, we just steamed it whole for 25 minutes, until it was nearly cooked, then took out the claw, knuckle and tail meal.

Also, the recipe calls for a pound and a half of butter. We were making about the half the lobster, but even so, I used only 1½ sticks which was plenty to cover all the meat and impart its vanilla flavor. I saved the leftover vanilla butter, and I’m thinking of bathing some cooked shrimp in it to serve over rice for dinner tonight.

To round out the Valentine’s Day meal, we started with a bottle of Veuve Cliquot, served the lobster with potato rösti, and finished with molten chocolate cakes. As the snow fell outside, staying nestled inside our (not so) warm house was just the thing for the evening. 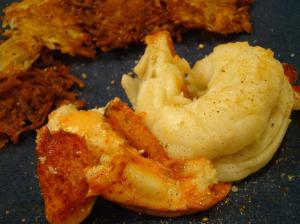 To see how the other Doristas enjoyed their lobster, check out their links here. You can find the recipe in Dorie Greenspan’s book Around My French Table.