Once upon a time, I did not like cabbage. That’s actually an understatement.  I didn’t just not like it, I loathed it.

I had limited experience with cabbage, but enough to make a sweeping judgment against it. The cabbage of my childhood was cole slaw – deli cole slaw — the kind that oozes with thin, milky mayonnaise. My mother adored it! She mixed in ketchup, or something equally vile, slathered it on sandwiches, and called it Russian dressing. I was not convinced.

In college, I lived in a dorm with kitchens. The students came from varied culinary provenances. We sometimes cooked individually and sometimes in groups. Sharing was the norm. I tried many new foods, most of which I liked. This is where I was introduced to sauerkraut. I had no idea it was cabbage, but I knew I didn’t like it. This was served warm – stringy, acidic, bitter, and stinky. I could find nothing redeeming about it.

Fast forward to the first time I tasted homemade cole slaw, marinated in a vinaigrette. Freshly shredded cabbage was a revelation. It didn’t have much flavor of its own, but the crunchy texture combined with other freshly pickled vegetables caused me to reconsider earlier opinions. Though I usually shied away from creamy dressings, various cole slaw recipes earned spots in my picnic salad repertoire.

I was not as accepting of cooked cabbage. I equated cooked cabbage with the sauerkraut that repulsed me. I can’t remember the first time that I ate something with cooked cabbage in my post-collegiate life. I’m sure it was served to me at someone’s house and I just thought “vegetable”. Little did I know that the natural flavor of cabbage was mild and the texture somewhere between silky and pleasantly chewy. It took work to ruin it by turning it into sauerkraut. I willingly started to cook cabbage in savory dishes.

For the past several summers, I’ve been perfecting homemade sour dill pickles. I grow my own pickling cucumbers for a ready supply and make half a dozen large jars to enjoy throughout the rest of the year. I love the tang of lacto-fermentation. Over the same several summers, I also make a jar of kimchi every summer when my CSA share has a head of Napa cabbage. In my mind, Napa cabbage is a completely different vegetable than regular old green cabbage.

During these kitchen experiments, my friend Jackie suggested I add sauerkraut to the mix. My response: NO WAY! I HATE SAUERKRAUT! She couldn’t understand why and tried explaining that the fermentation tastes similar to the pickles. How could I like one and not the other? She couldn’t fathom my logic, and I was completely close-minded. Shortly afterwards, I visited a farmers market where a small batch producer of sauerkraut displayed their wares. When offered, I tentatively tasted the smallest nibble. Hmmmm… Jackie was right! The brine was reminiscent of sour pickles with less seasoning. I took another bite. It was actually good. I bought a jar. And now I make a large jar of sauerkraut each summer. I think the stuff I had back in college was out of a can. Quality makes such a difference.

It’s been a long road, but I’ve become a fan of cabbage. Who’d have ever thought that possible? Certainly not me.  It must be said.  Cabbage and I, we lived happily ever after.

This week for Cook the Book Fridays, we’re making Pasta with Cabbage, Winter Squash, and Walnuts from Dorie Greenspan’s Everyday Dorie. I was unfazed. In an intriguing twist, shredded cabbage stands in for some of the pasta. Long strands of toothsome linguine contrast with the silkier shorter strands of cooked cabbage. Sautéed chunks of butternut squash and sun-dried tomatoes (the original called for dried cranberries, taboo at our house) give the pasta some color. Walnuts and grated Parmesan cheese tie the flavors together. 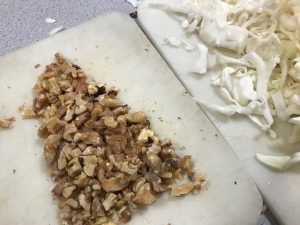 This dish was simple enough for a weeknight, but we thought it lacked pizazz. The combination of ingredients should have tasted more interesting. Maybe cooking some onion or garlic with the squash would have added the missing oomph. We were disappointed.

You can see what the other members of Cook the Book Fridays thought by following their links here. The recipe is on page 232 of Everyday Dorie.