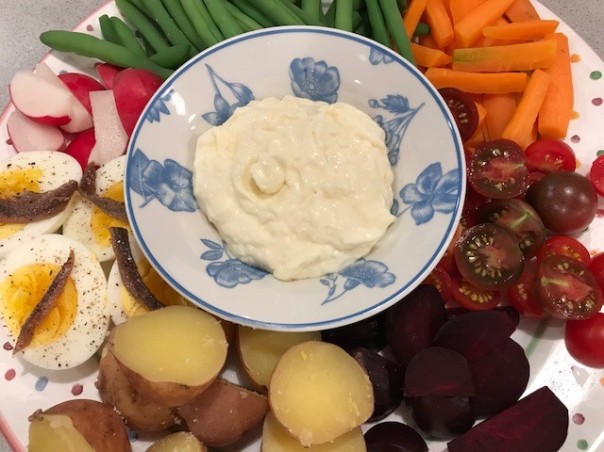 I love the name of this meal.  Le Grand Aioli!  It sounds so important.  In actuality, it’s a somewhat humble feast of seasonal vegetables, hard-boiled eggs, and sometimes fish, that accompany the star of the show, the garlicky mayonnaise known as aioli.  I’ve made this a few times in the past.  It’s the perfect meal for the peak of summer when produce is at its very best.  When it came up as the weekly challenge recipe for Cook the Book Fridays I was fully on board.

First up is the central component of the spread, the aioli.  I’ve made mayonnaise many times and have no fear, except on hot and humid days.  On the card for the mayonnaise recipe I usually use, I’ve written as reminder “Do not make when it is hot and humid.”  Earlier in the day, it was in the 90s, but a rainstorm brought the temperature down about twenty degrees, so I thought I’d be OK.  Not so fast…

Because I’m lazy, I was making aioli in the food processor.  I chopped the garlic and add the egg yolk and salt.  Then, I slowly drizzled in the oil and… nothing happened.  It did NOT emulsify.  I tried two “fixes” that the Internet recommends.  First adding another egg yolk, then adding some commercial mayonnaise.  It didn’t even thicken; never mind the emulsification I was expecting.  Frustrated, I dumped le grand failure and simply minced more garlic and stirred it into commercial mayonnaise thinned with lemon juice.  Not as good as homemade, but certainly guaranteed success!

My accompaniments were from my backyard garden or local farms, my favorite kind of summer meal.  Cherry tomatoes and green beans that I grew myself!  Carrots, potatoes, beets, and eggs from local farms.  I love beets, though not raw, so I roasted the beets.  I didn’t include any fish (or chicken), feeling that the eggs draped with anchovy were enough choice for our meal for two.

Le Grand Aioli is the perfect showcase for the summer’s latest yield.  I’ve only made this in the summer but could imagine a similarly enticing platter with roasted winter squash and some other root vegetables as fall arrives.

You should try this before summer ends.  The recipe can be found on page 145 of David Lebovitz’s My Paris Kitchen.  Other reviews of this recipe from my friends from Cook the Book Fridays can be found here.