2017 was definitely my “Year of Bread”.  The sourdough starter I established in the summer of 2016 was thriving.  I shared the starter with several friends and made spinoff starters in whole wheat and rye.  In 2017, bread baking became part of my weekly routine.

It looks like 2018 will continue the trend.  Sourdough makes regular appearances, but, for variety, I’ve been making some breads with commercial dry yeast too.  I made a 6-strand braided challah with King Arthur Flour’s January Bakealong.  I also tried my hand at Anadama bread after having it at our newest favorite breakfast place.  Add the Chocolate and Dried Cherry Fougasse for Cook the Book Fridays to the list.

With the sourdough loaves, I need to plan ahead to leave time for feeding the starter, plus I almost exclusively make no-knead loaves which require a LONG rise time.  No instant gratification on that track.  In comparison, the fougasse took no time at all.

The basic dough was simple, as you might expect: flour, yeast, water, olive oil, and a little sugar.  It’s the mix-ins, a blend of chocolate, dried cherries, toasted hazelnuts, and some orange zest, that make this interesting. 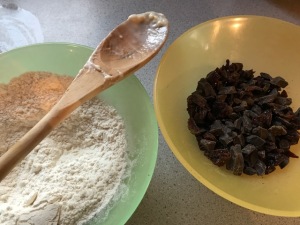 With fruit in the mix, I knew Howard wouldn’t be sampling, so I halved the recipe and made just one loaf.  I was a little concerned that there wasn’t quite enough dough in the stand mixer to knead.  It took a while, but eventually the dough hook brought it all together.

After the initial rise, the dough is shaped into an oval and sliced to resemble a leaf before rising again.

It stretches out when you transfer to the pan.  Just before baking, the loaf is brushed with olive oil and sprinkled with flaky salt.

I had to bake my loaf about twice as long as instructed before it lost its raw look and started to brown.

Tearing off segments, this bread made a wonderful snack.  I enjoyed the flavors and can imagine other combinations of fruits and nuts that would be equally delicious.  Or maybe just chocolate and nuts so that Howard could enjoy it.

I’ll admit that I was ambivalent going into this recipe, but it surprised me.  I’m glad I made it after all.

You can find the recipe on page 266 of David Lebovitz’s My Paris Kitchen.  To see how my Cook the Book Friday friends enjoyed this recipe, follow their links here.

Happy March!  It sure has come in like a lion.