In a book filled with many winners, David Lebovitz’s My Paris Kitchen seldom disappoints.  Working my way through the entire book with my friends from Cook the Book Fridays is a mostly delicious adventure.  Each recipe offers a new technique, a new flavor combination, or a new twist on an old favorite.  There’s something new to learn with every challenge.

The name of this week’s recipe Buckwheat Rolls with Seaweed Butter is tantalizingly exotic.  The buckwheat galettes provide a foundation of French-ness for an Asian compound butter made with seaweed sheets, aka nori.

It isn’t a difficult recipe.  Mixing the batter for the galettes (or savory crêpes) needs no special equipment beyond a bowl and a whisk.

Cooking the galettes is a bit tricky, but I was more successful this time than when we made the buckwheat crêpes with ham, cheese, and egg last year.  For the seaweed butter, I used some Trader Joe’s roasted seaweed snacks I had on-hand.  They toast up easily with a few waves over a gas flame before being mashed into softened butter. 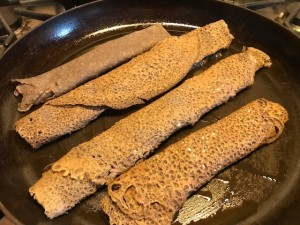 The most difficult part was spreading the butter onto the galettes before rolling them in preparation for a final crisping in the pan.  Once crisped on both sides, the rolls are sliced into bite-sized pieces for nibbling.

The verdict:  Ick!  This was a flop.  Neither Howard or I liked these at all.  They had so much potential, but despite the interesting list of ingredients, they were rather tasteless.  We didn’t even finish them.  Boo!  On the positive side, this is only the second recipe we’ve made from this book that I consider to be a failure (the other one was Panisse Puffs).  And so, I look forward to the next recipe the group takes on.

I’ll bet that my Cook the Book Fridays friends enjoyed this more than we did, so you can check out their links here.