It seems like the weather on the first day of September is always cool and crisp.  It’s technically still summer, but it’s as if autumn pops its head up to say “Hi!  Missed me?  I’m coming soon!”  A taste of autumn for a day or two, then summer resumes its place for the duration.

Produce-wise, it’s the peak of summer vegetables.  Tomatoes, corn, zucchini abound.  It’s one of my favorite times of year for eating.

This week’s recipe for Cook the Book Fridays fit right into the “peak of summer” theme.  Baked Provençal Vegetables aka Tian was the order of the day.  Sautéed onions and garlic for the bed for an arrangement of thinly sliced zucchini (home grown!), eggplant, and tomatoes sprinkled with thyme and handful of Gruyère cheese.  The ingredients resemble those ratatouille, but the technique, baking instead of simmering stovetop, makes a tian so much easier to prepare. 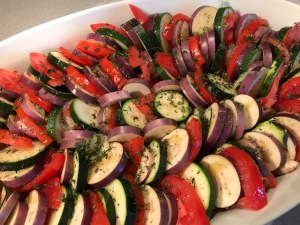 I served the meltingly tender vegetables atop leftover spaghetti.  It was delicious.  What’s not to like?  Well, that assumes you’re a fan of zucchini and eggplant, which Howard is not.  Obviously, I was solo for dinner the night I made this.

If you’d like the recipe, you’ll find it on page 226 of David Lebovitz’s My Paris Kitchen.  This recipe from Saveur is also very similar.  You can also find the reviews of my Cook the Book Fridays friends here.