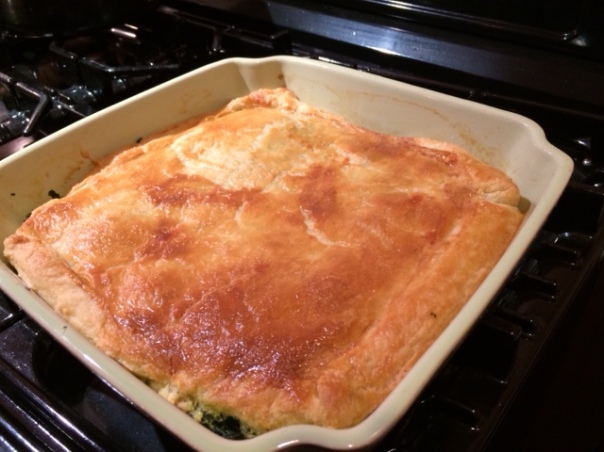 Back in August, I took on the challenge of another cooking group. The Cottage Cooking Club is cooking through British chef Hugh Fearnley-Whittingstall’s cookbook, River Cottage Veg. This group is more relaxed than French Fridays. Each month, the group’s leader, Andrea, The Kitchen Lioness, selects a group of seasonal recipes to choose from. The plan is not for each person to cook every recipe in the book. We each pick from the month’s choices and across the group, the recipes all get made.  At the end of the month, everyone posts about what they made.

Some of our group members are ambitious and make most of the selected recipes. I’ve been more cautious and have committed to making just one or two each month. So far, all the recipes have been worth trying and this month’s were no exception.

First, I made Leek and Chestnut Risotto. This is a pretty basic recipe with only leeks added to the rice. The sautéed chestnuts aren’t sprinkled on top until the end. This recipe follows the traditional method for making risotto, requiring lots of time stirring the pot. I used squash stock I had made from the seeds and pulp from a butternut squash I cooked earlier in the week. We found the risotto to be on the bland side, but I think my stock was light on salt, and I didn’t season the final dish heavily enough. Truffle salt sprinkled on leftovers made a big improvement. 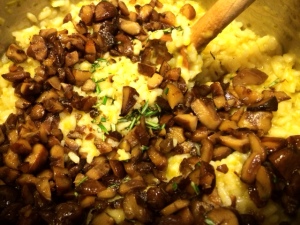 My other choice was a winner: Corner Shop Spanakopita. I love spinach pie when I’m in a Greek or any other Middle Eastern restaurant that offers it, however, it’s not something I’d typically make at home. Fussing with the phyllo dough tries my patience. This recipe takes a different approach, topping the spinach filling with puff pastry. Brilliant!

This spanakopita starts with frozen spinach. The recipe specifies whole leaf spinach. I’m not sure why it doesn’t call for the chopped variety because after defrosting, you coarsely chop the spinach anyway. Having made this once, I would buy chopped spinach next time. The spinach is combined with onions, cumin seed, and thyme that have been sautéed together, plus some egg for binding. Two layers of spinach separated by a layer of crumbled goat cheese and toasted pine nuts are topped with puff pastry and popped into the oven. I always have problems rolling out store-bought puff pastry after it gets unfolded, so, as crazy as it seems, I make my own “rough puff” and use that instead. It’s actually easier for me. 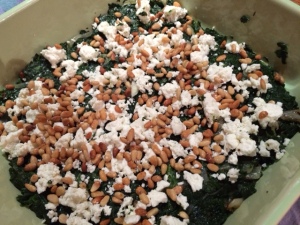 I served the piping hot spanakopita with a simple salad: baby arugula dressed with mustard vinaigrette. It was the perfect dinner on a winter’s night. This recipe earns a spot in my repertoire and will be repeated. 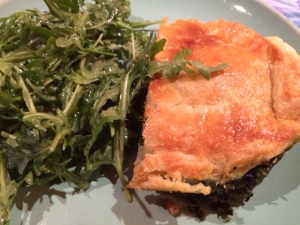 As we approach the end of 2014, I want to wish all the cooks in the Cottage Cooking Club happiness and good health in the year ahead! I’ve enjoyed cooking with you over the past few months and look forward to finishing this project with you in 2015. Happy New Year!!!

If you want to try this, here’s a version of the recipe here, though the original uses 2 pounds of frozen spinach. You can check out reviews of the other recipes selected for December here.