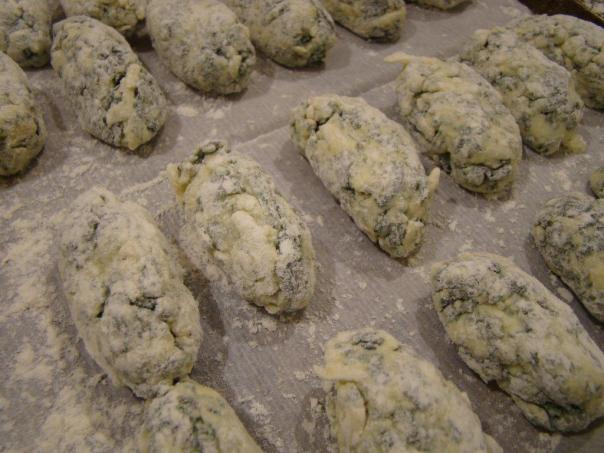 This week’s recipe for French Fridays with Dorie is something that on the surface would seem more appropriate for an Italian cookbook. Storzapretis are, in fact, Corsican, and the recipe comes from one of Dorie’s friends in Paris who shared her Corsican father’s recipe for these ricotta dumplings.

The alternate name for this recipe is “Corsican Spinach and Mint Gnocchi“, though I found it to be closer to gnudi. Some fingerwork on the internet uncovered the difference between gnocchi and gnudi to be the amount of flour. Gnudi uses very little flour, which was true for storzapretis too. I made gnocchi last year, and the shaping was different too. With the gnocchi, long rolls were cut into the smaller gnocchi, where the storzapretis are formed by making quenelles between two spoons.

Storzapretis are made from a mostly flourless mixture of ricotta, spinach, egg, Gruyère, and fresh herbs. From its alias, I assume the recipe originally used mint, but I love the floral undertones of marjoram (an annual form of oregano) so given the choice in the recipe, I picked marjoram.

After shaping the dough into quenelles and tossed in flour, they are frozen to firm up, then cooked in a pot of the gentlest simmer of water. The way the dumplings sank to the bottom of the pot, then floated up to finish cooking reminded me of making matzo balls, my favorite kind of soup dumplings. 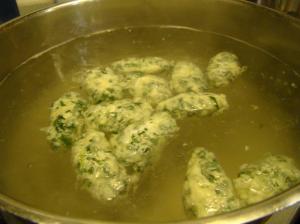 The storzapretis resemble the insides of ravioli, which might be the origin of the name gnudi, which means naked, like ravioli filling without its wrapper.

Finally, the dumplings are laid out in a baking dish, covered with marinara sauce, sprinkled with more Gruyère (the French touch) and baked until it’s heated through and the cheese is melting.

I enjoyed discovered something completely different. I didn’t realize how much work it would be to shape the dough though. I didn’t eat dinner until 8:30 pm, much later than intended. I liked it, but I’m not sure I’d take the time to make storzapretis again. I’m hoping leftovers taste OK because we’re having it again for dinner tonight.

I don’t have any pictures to share, but on Wednesday night, I braved the frigid cold to attend Dorie’s book signing for Baking Chez Moi at the Harvard Book Store. It was so nice to see her again. She is so down-to-earth and genuine. She shared stories about life in Paris for nearly an hour and then entertained a few questions before signing books. When it was my turn, she came out from behind the table to give me a hug and kiss, then signed both the copy of Baking Chez Moi I purchased that evening PLUS my well-used copy of Around My French Table. I’m hoping to occasionally jump on the Tuesdays with Dorie bandwagon to bake from the new book, but I won’t be fully committed.

To see how the other Doristas made out with their storzapretis, check out their links here. The recipe can be found here or in Dorie Greenspan’s book Around My French Table.

For my American Dorista friends, because we won’t meet again until next Friday, I wish you a Happy Thanksgiving along with safe travels if you’ll be away from home. I give thanks for the many friends I’ve made on this cyber-culinary journey!