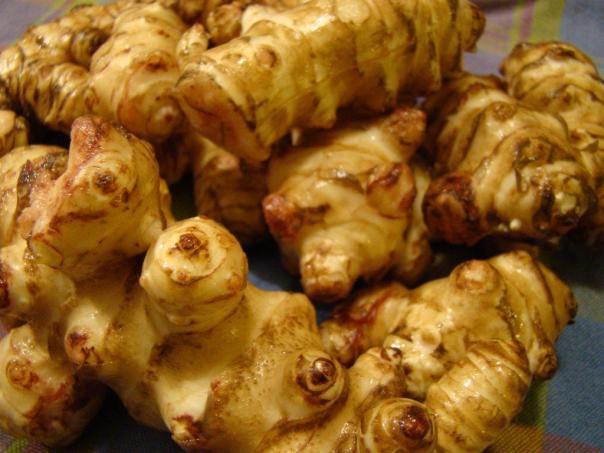 I’m thinking that this October French Fridays with Dorie is running an “ugliest vegetable” pageant. Two weeks ago, it seemed clear that celery root was a clear winner, but with this week’s introduction to Jerusalem artichokes, there’s some competition! (And dare I mention that I have some kohlrabi bulbs in my fridge?)

Jerusalem artichokes are the tuber (or root) of the helianthus tuberosus, a native sunflower that grows along some of my daily dog walking routes. The sunflower provides the origin for its nickname, sunchoke. In the back of my mind, if I wasn’t able to find this vegetable in the store, I considered digging some up, but fortunately, I found some on my first try. It came from California, so not as native as down the street, but organic, and probably a little safer to eat than whatever I might have dug up from the side of the road.

This plant has been eaten as far back as the Native Americans, who taught early settlers to eat the roots as well. For me, this was the first time I’ve eaten it. The roots resemble gnarly, warty ginger roots. In fact, the cashier initially rang it up as galangal, another rhizome related to ginger. They were hard to peel because of all the bumps. I did my best, as Dorie counseled, and didn’t worry about it too much. 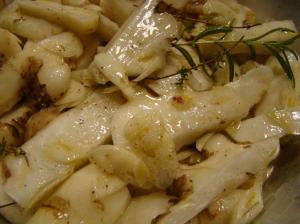 The preparation was simple. Jerusalem artichokes, quartered lengthwise, were tossed with slivers of garlic (done with the vegetable peeler because I was sure doing it with the mandoline would result in a hospital visit), olive oil, sprigs of thyme and rosemary, and a generous seasoning of salt and pepper. This roasted in the oven for 45 minutes, until tender, tossing it once halfway through. 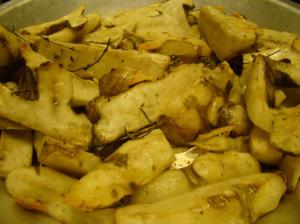 The flavor was nutty and earthy, definitely reminiscent of an artichoke. They added a touch of the homemade to a meal of leftovers from a restaurant meal. Though we enjoyed this new taste, I’m not sure I’d make a point of making these again. Peeling them was a pain, and at $5 a pound, I’m not sure I like them that much more than potatoes or other root vegetables. It was fun to try something new though.

You hardly need a recipe for this, but if you want one, you’ll find it in Dorie Greenspan’s book Around My French Table. To check out what the Doristas thought, check out their links here.