The United States and France have a totally different take on waffles. Here in the U.S., waffles are breakfast fare. Though I have a waffle iron, I’m often hard-pressed to opt for waffles over pancakes because the batters are so similar, and pancakes are quicker to make and serve to waiting diners. Traditionally, they are drenched in maple syrup, though not being a fan of maple syrup (gasp!), I spread them with jam or preserves instead (pancakes too).

In France, savory waffles are served as an appetizer (not even a concept here) or, when sweet, as dessert. This week’s recipe for French Fridays with Dorie is a savory version of waffles filled with smoked salmon and complementary herbs. I decided to serve Smoked Salmon Waffles as the main event in a “Breakfast for Dinner” night.

The basic waffle batter is like the breakfast version, but with no sugar added. These waffles were flavored with chopped shallot (I didn’t realize I’d used up the scallions the night before), parsley, and chives plus smoked salmon slivers. The batter was pretty with the colorful confetti of the green and pink add-ins. 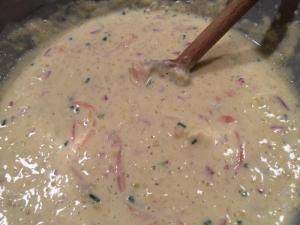 I was intrigued by an unusual step in Dorie’s instructions for cooking the waffles. She directed us to spread the batter over the grid with a spatula and leave the waffle iron open while it cooked for the first thirty seconds. After that, you close the waffle iron to finish cooking. I’ve always done the plop-and-close method, but I tried my usual way and Dorie’s way. I’m not sure why, but those I made Dorie’s way had a more uniform shape and a browner surface. I think it would be worth trying out her method with plain waffles next time I make them too.

As always, it took a while to cook the waffles. Each one took about 5 minutes. I think that’s why pancakes are more popular at my house. I kept them warm in the oven, but ended up just cooking what we would eat that night, unplugging the waffle iron, eating dinner, then cooking the rest while I washed the dishes.

To round out “Breakfast for Dinner”, I served scrambled eggs with the waffles. I wasn’t able to find salmon roe at any of my usual shopping venues, so I chopped additional smoked salmon to top the dollop of crème fraîche that garnished the waffles. It added an extra splash of color. Salmon roe would have been fabulous, if I’d been able to find some.

Howard’s initial reaction was that the savory waffles were odd. After about half a waffle, he changed his mind and thought they were good. We don’t usually have breakfast for dinner. That’s often a fallback for me when I’m eating alone, so that might have been what he found unusual.

We ate the leftovers (the waffles I cooked after dinner) the next night. They reheated perfectly in the toaster. Instead of eggs, we had a simple salad to accompany the waffles, so the second night’s combo bore no resemblance to breakfast.

While I enjoyed this recipe, I don’t know that I’d make it again. If you want to know what my Dorista friends thought, you can follow their links from here. If you’d like to try them yourself, the recipe can be found here or in Dorie Greenspan’s book Around My French Table.