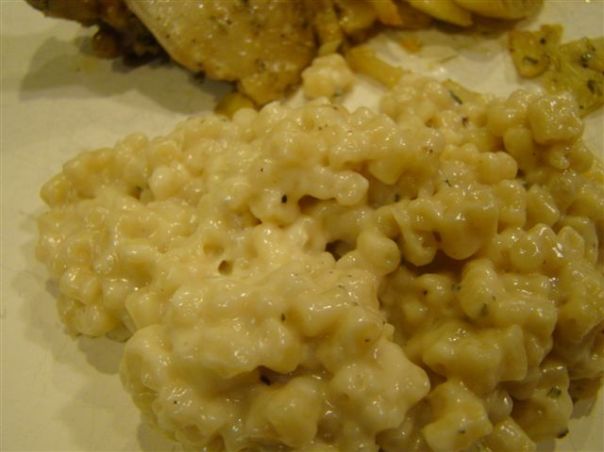 Happy New Year! The years seem to run into each other, and the 2013 to 2014 transition is no exception. As we get started in the new year, I hope it is a happy and healthy one for you and your family.

The first French Fridays with Dorie recipe is for a lovely side dish called “dressy” pasta risotto. I love pasta and risotto, so have wanted to try this recipe for a while, to see what it’s all about.

I’m not sure what it is about the French and pasta. I think their relationship is a bit odd. Here we have pasta cooked like risotto, with just enough liquid for the pasta to absorb to be done: a little unusual. Years ago, when I first visited France, I had another odd “French pasta experience”. It’s one worth sharing as it has a prominent place in Howard and my family lore. Bear with me, because it takes a little time to tell.

The summer I was around 12, a French girl, Marie-Pasçale, spent the summer with my family as our au pair. My mother kept in touch with her intermittently over the years. On our first trip to France, Howard and I visited the grown-up Marie-Pasçale, now married and living in Brittany, with her husband and 6 children. We had a wonderful visit. Our dinner that night is one that Howard and I still dream about. We enjoyed fresh sardines grilled over a wood fire, and it was amazing!

To keep their lawn cropped, they kept a small herd of sheep. The next day was its own hilarious adventure when we helped corral the sheep into a VW bus to take to a neighbor’s house to be shorn. Apparently, sheep are not the smartest or bravest animals but will follow the leader wherever she goes. The game plan was for everyone to form a large human arc around the sheep and gradually step towards the center. The idea was to get the sheep to huddle close together and move towards the one opening in the circle, which led them directly into the open door of the bus. We were told: just don’t let a sheep past you because if you do, they will all follow her lead and run.

At this point in my life, I had no experience with farm animals. As we stepped closer to the sheep, I realized that an unshorn sheep is a smelly and dirty creature. When it’s time for shearing, the sheep’s coat is heavily greased with lanolin and adorned with bits of straw and not a small amount of poop. As we got even closer, I could tell that the sheep closest to me was thinking about charging me and breaking out of the circle. I was trying to be brave and stand my ground, but I really didn’t want the sheep to touch me. I was wearing my only pair of clean jeans and had to board an airplane the next day. Plus, the sheep was really dirty. I’ll admit, I was the weak link in the chain, I lost my limited bravado, the sheep broke through, and chaos ensued.

Eventually, the sheep were rounded up, transported, shorn, and brought back home, and Marie-Pasçale’s husband Christophe made us lunch. He put a big pot of spaghetti on to boil. I should mention that one of Howard’s favorite quick lunches is a bowl of elbow macaroni with ketchup. To him, it’s comfort food. I don’t like ketchup to begin with. I’m also part Italian, so I think this combo is kind of gross. Well, when the spaghetti was cooked, Christophe put the colander of spaghetti on the table with an assortment of toppings so everyone could serve themselves. One of those toppings was a bottle of Heinz ketchup. And, it was the most popular choice amongst the French people at the table. I just rolled my eyes, but Howard was so proud to learn that his favorite lunch was also considered to be French home cooking.

Back to the pasta risotto… First, you sauté an onion, then add chicken broth and little pasta shapes. I used tubetti , but Dorie says elbow macaroni is more traditional. This would also be nice with the tiny shell pasta. Like risotto, you use just enough liquid for the pasta to absorb, rather than the usual way of boiling pasta and draining off the excess water. The pasta cooks at an active simmer. Unlike risotto, you only have to give the pot an occasional stir.

After the liquid is absorbed, the pasta will be al dente. Now it’s time to dress it up and add some decadence. You stir in some heavy cream, a bit of mascarpone, and a generous amount of Parmesan cheese. In the end, you get a pot of delicious “cheesy noodles”

The cheesy pasta went well with chicken as well as steak dinners. Now that I think about it, this might be equally delicious without the cream and cheese. (I’ll have to try that another time.)

If you want to try this yourself, you can find the recipe here. You can also find it in Dorie Greenspan’s book Around My French Table. To read about others’ pasta risotto, follow their links here.

For those of you who don’t get much snow, here’s the view from my back porch this morning. We got about 8 inches of the white stuff last night. The sun is out now, but the temperatures are in the Arctic range.