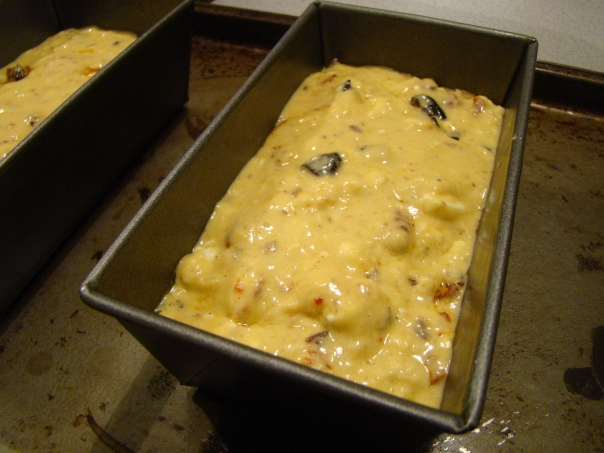 I don’t make either very often, but I like savory breads more than sweet ones. I think it’s because the sweet ones are typically served at breakfast under the label of “bread”, but are really just cakes in loaf form. With the exception of a truly amazing sticky bun or coffee cake, I really don’t like sweets in the morning. That’s a long way of saying I was up to the task of this week’s French Fridays with Dorie recipe, Back-of-the-Card Cheese and Olive Bread.

The recipe called for tapenade, olives and Comté cheese, but cries out to be personalized. I took a peek in the refrigerator for inspiration. I decided to give my loaf a Greek twist. I substituted sun-dried tomatoes for half of the olives and used 1 cup of feta for the cheese.

I also opted to make mini loaves. Recipes for one big loaf fill my 3 smaller sized pans. I can eat one right away and share the others, or freeze for later. I served the bread alongside a bowl of soup for lunch, plus further nibbling throughout the day.

The flavors were salty and savory which I enjoyed. The texture of the bread was more like cake than a typical quick bread. Maybe that’s the French way. I’m not sure that I liked that part, especially with the savory ingredients, so I don’t think I’ll make this again. 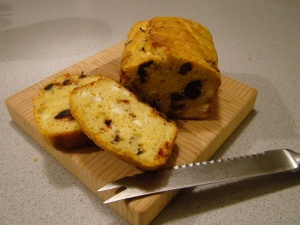 If you’d like to try this yourself, Dorie has posted the recipe here. You can also find it in Dorie Greenspan’s book Around My French Table.

To see the winning combinations of other French Fridays with Dorie participants, follow their links here