The theme for this year’s Food Revolution Day is “Cook it. Share it. Live It.” – something I, along with my friends at French Fridays with Dorie, are passionate about already! Today with join together, telling to story of cooking and sharing a favorite recipe from our group’s bible, Dorie Greenspan’s book Around My French Table.

At my house, Howard and I both get excited about preparing good food to eat and share at home. We enjoy spending time together in the kitchen, though we each have our areas of expertise. I’m the non-grilled main dish maker, the soup maker, the side dish maker, and the baker. Howard’s territory is the grill and smoker and his modernist sous-vide adventures as well as cooking perfect eggs, in every preparation.

I used the Food Revolution Day challenge to teach Howard, our resident chocolate fiend, to make a simple chocolate dessert: top-secret chocolate mousse, which FFwD made as a group back in November 2012.

Some new egg skills were involved. The first was learning to separate eggs. We started with the technique my mother taught me, transferring the yolk from shell to shell while letting the white fall into a bowl. That was a bit challenging, so we switched to the pour the egg into your hand and let the whites run through your fingers approach. Much more successful! 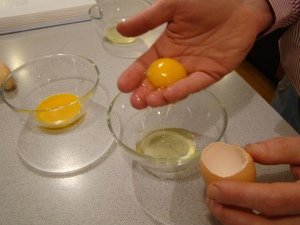 The next was whipping the egg whites until they were medium stiff. Howard loves electronic devices. In fact, he gave me my beloved KitchenAid as a gift. As I explained how to whip the egg whites, he pointed out that this was the first time he was using the machine that he bought (and recently repaired) for me.

The final technique was folding. When you aren’t the usual dessert maker, there isn’t much call to know how to fold ingredients together, but it was an easy lesson.

By the time the egg whites were ready to mix in, the chocolate-egg yolk mixture was a little chunky. We thought perhaps the other steps had taken longer than expected and the chocolate cooled down too much. The end result was less mousse-like than it was when I made it before, but it still tasted good.

Undeterred, Howard picked up fresh eggs the next morning and asked me to get more chocolate while I was out during the day. I had evening plans, but I came home to find that Howard had applied his newly learned essential cooking skills and whipped up another batch of chocolate mousse all by himself! Way to go, Howard! 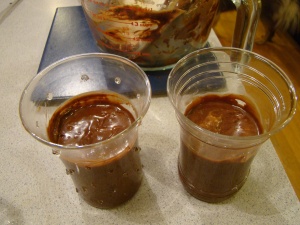 This time, he was careful about the timing, yet the mousse was still a little bit chunky. In the end, I think it’s because we were using 72% dark chocolate (in November, we used 60%) which must work differently in this dessert.

I have a feeling that more mousse will be made in our kitchen, and I won’t necessarily be the one preparing it. It’s revolutionary!