Pierre Hermé again? Two weeks ago for French Fridays with Dorie, we made an ispahan loaf cake inspired by Pierre Hermé. If you recall how much I enjoyed that cake (not), you can appreciate my trepidation about this week’s recipe. On the other hand, I’m a HUGE fan of slice-and-bake goodies. So, I took on this week’s challenge with an open mind.

You might be thinking, what are olive sablés? Aren’t sablés like shortbread, and isn’t shortbread a cookie? But, olives, they’re salty. Well, yes, that’s all true. The preparation of these sablés was like making icebox cookies with a few exceptions. The butter gets creamed until light and fluffy. In the first twist, a healthy dose of fruity olive oil is added. You also add a grated hard-boiled egg yolk, which is common to Austrian baking; another interesting twist. The other steps are all what you would expect for a cookie: lots of powdered sugar, flour, potato starch (another unusual ingredient) and vanilla. The result so far is a soft and sticky cookie dough. 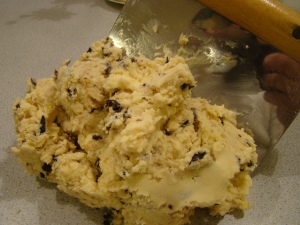 It’s the final step that moves this treat to the savory camp. Chopped oil-cured olives! This happens to be an ingredient I love. As you know, my husband Howard doesn’t like sweet ingredients in his savory food. Oil-cured olives are my usual substitute for raisins or other dried fruit when the recipe will suffer from a straight-out omission. I use the Pastene brand of oil-cured olives, imported from Morocco. Their fruity flavor and soft, somewhat sticky, texture works every time. These olives worked well in the sablés. They were definitely salty, but fruity too.

The dough is shaped into rolls and chilled overnight. I sliced one roll before dinner and baked them until firm. The olive sablés were a delightful accompaniment to what were to be our pre-dinner nibbles, but ended up just being dinner. We also had an assortment of cheese and this delicious fennel and bean dip. 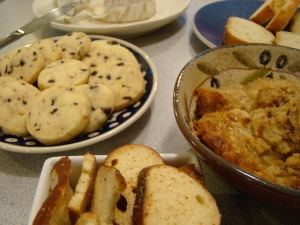 Two thumbs up (mine and Howard’s) for this one. We had a lengthy discussion about how to describe them. It’s confusing. They aren’t really cookies because they aren’t for dessert, and yet, they aren’t really crackers either. No matter, either way, they are delicious. (I’d love to see the look on someone’s face who didn’t know the secret ingredient. If you didn’t know any better, I think you’d think you were eating a chocolate chip cookie!)

I have two more rolls to bake later. I plan to stash them in the freezer and enjoy them in the coming weeks. To me, that’s the magic of slice-and-bake. The work is already done, and it’s nearly instant gratification when you want to treat yourself to some homemade goodness.

For this recipe you use the yolk of one hard-boiled egg. Dorie says to discard the white, but I hate to waste. What can you do with one hard-boiled egg white? My solution was to hard boil a total of 5 eggs, one for this recipe plus 4 more, and make egg salad, adding one extra white. Egg salad brings back childhood memories for me, so egg salad for lunch this week is an added bonus. Indeed, April is off to a good start!

If you’d like to try these yourself, you can find the recipe here. And, you can always find it in Dorie Greenspan’s book Around My French Table. To read about my fellow bloggers’ sablés, check out their links here.