I have a thing for goats. I’ve adored them for years. In my dreams, I’d like to have a small herd someday, but, realistically, that just isn’t going to happen.

I love goat cheese too. It’s more realistic for me to try my hand at homemade goat cheese. I took a goat cheesemaking class in September 2011, but after I ordered the cultures, I felt intimidated and procrastinated on trying it myself.

Recently, I took another class on making fresh cheeses. We learned to make ricotta and paneer from cow’s milk and chèvre from goat’s. The goat cheese recipe was simpler than the original one I learned. I still had the original cultures in the freezer, so I took immediate action.

I don’t have access to raw goat’s milk, but Whole Foods sells goat’s milk that isn’t ultra-pasteurized. Interestingly, I read in the local paper that Oak Knoll Dairy has a Lexington connection. The owners used to live on a small farm just across town, Oak Knoll Farm, with blueberry fields open for pick-you-own. Apparently, they started to raise goats and eventually moved to Vermont where they now have a Grade A commercial goat dairy.

Here’s how easy it is. The milk is heated up to the right temperature. I mixed in some direct-set culture for goat cheese. I covered the pot and let it sit on the stovetop for 24 hours until the curds set.

Then, I ladled the cheese into a strainer (I used a fine-meshed jelly bag) to allow the whey to drip out for 12 hours, and it was chèvre. 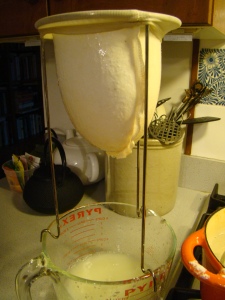 There was one hitch, I had a goat cheese accident. This isn’t part of the recipe. I decided that the jelly bag and the bowl it was dripping into should be on a tray. I didn’t account for the precarious balance of that jelly bag, and, just my luck, it tipped. I caught the bag on its way down, but I lost a third to half of the batch all over the kitchen floor… It took an hour to clean up and I continued to notice missed spots on the cabinets for days… 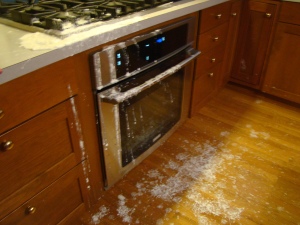 I started with a half-gallon of goat’s milk and, in the end, accident included, the chèvre filled a 10-ounce container. If it hadn’t spilled, there should have been about a pound.

The soft fresh cheese was delicious spread on toast and topped with a sprinkle of coarse salt. 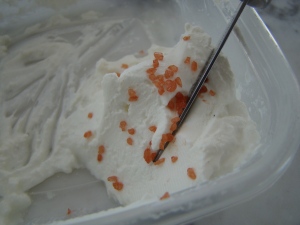 I also dabbed the goat cheese on top of a galette.

You can substitute the whey for milk when baking, so my Super Bowl cornbread and some not-so-successful buckwheat popovers had some added tang from goat milk whey.

My first batch is gone, but I plan to make more this week, without spillage, I hope.

Heat milk to 86F. Stir in one packet starter bacteria. Cover and leave at room temperature, undisturbed, for 12 to 24 hours, until curds are set. Ladle curd gently into a jelly bag or butter muslin-lined strainer set over a bowl large enough to catch whey. Let it hang to drain for 6 to 12 hours. Can be salted to taste with an uniodized salt, like kosher or sea salt.

The recipe can be halved (that’s what I did).