← A Pair for Pears
Cookie Swap for a Cause → 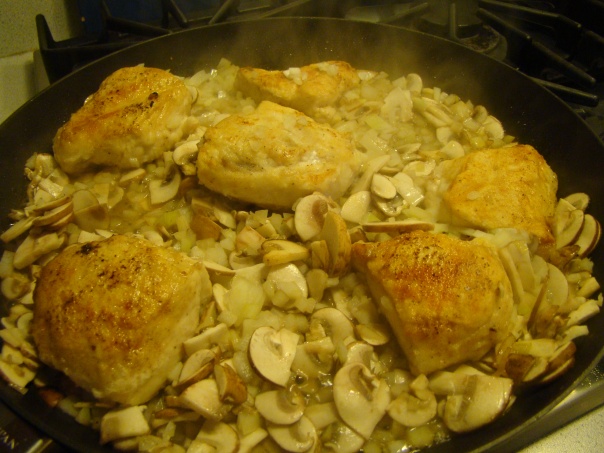 I may have been cooking for a long time, but I always struggle with what to make for dinner. It’s partly because I’m not a big fan of what I call the “three-position dinner”: a meat with starch and a vegetable all coexisting separately on the plate. I prefer dishes where everything is all mixed together, but those dishes typically require more ingredients, hence, more planning and organization, which I’m not so good at.

This week’s recipe for French Fridays with Dorie was a mélange sort of recipe: chicken, apples, and cream à la Normande. It also had lots of mushrooms, even though that wasn’t in the name.

You start with boneless chicken breasts, my least favorite protein because it so often turns out dry (also we’re a dark meat family), but I was being open-minded. I thought, Dorie seldom steers us wrong, after all, and she calls for dark meat in many other recipes, so breasts must be right for this one. I did cut the chicken breasts in half crosswise to make a more realistic serving size for our eating style. The chicken is lightly dredged in flour and browned on both sides.

Then you add chopped onions, sliced mushrooms, and apple chunks until they start to soften. I actually cooked the apple chunks separately. (I’m sure I’ve shared that the other eater at my house can’t abide fruit in savory dishes. I do my best to please. Or is it appease?) Some chicken broth is added, and when the chicken is nearly done, some Applejack and cream. Voilà!

The whole thing took less than half an hour from start to finish. Good weekday food! I served the chicken over Israeli couscous with roasted broccoli on the side – a two-position dinner, but definitely all mixed up. 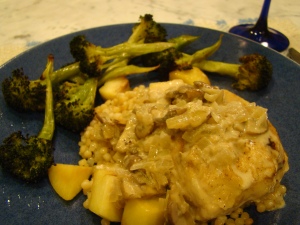 The chicken breast was moist, and the sauce was rich, but not too. Howard enjoyed it without the apples, and I enjoyed it with. I don’t know whether the apple flavor would have permeated the sauce, but sprinkling the apple chunks over the couscous before dishing out the chicken and sauce worked in my compromise situation.

This dinner was a definite winner, and I would definitely make it again, with a few minor tweaks. First, I would leave out the apples to reduce the hassle of extra pans (see above). I might add more mushrooms to compensate. And, I would cut the chicken into bite-sized chunks or strips, making it even more mélange-y.

You can find the recipe here on the Monterey Herald site. This recipe and hundreds more can be found in Dorie Greenspan’s book Around My French Table (good holiday gift idea!).

To see what the other FFwD bloggers thought of Normandy chicken, check out their links here.

Happy French Friday to all!

← A Pair for Pears
Cookie Swap for a Cause →