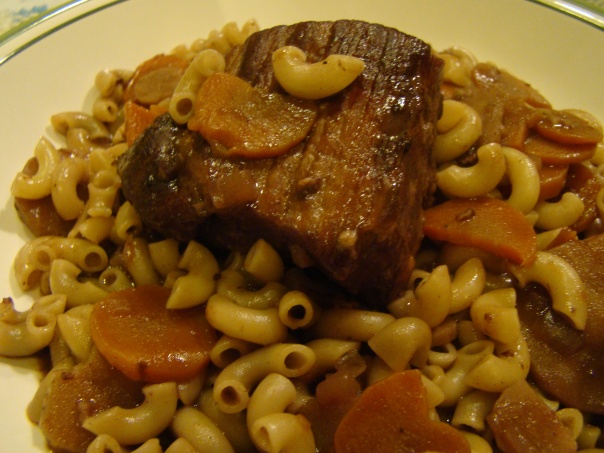 I’m sure that each time I make a beef stewy thing I mention that it’s not my favorite sort of meal. I’ve never been able to sort out whether it’s the long-cooked vegetables or the texture of the meat. So, I was ambivalent when I set out to make this week’s French Fridays with Dorie recipe for Beef Daube with Carrots and Elbow Macaroni.

The recipe ideally calls for beef cheeks. I still have a chest freezer half-filled with the hind quarter of a cow that we purchased last fall from my sister’s father-in-law who raised it. At the time, we requested the beef cheeks, even though they are obviously from the other end of the animal, thinking others might not want this less familiar meat. Unfortunately, we didn’t get it.

As an alternative, the recipe suggests using chuck roast. Chuck roast is the shoulder of the cow, again from the wrong end of what we have. It seemed like I should use something I had rather than going to the store to buy more beef. I looked up other alternative cuts that are good for braising and so I used a round roast which is part of the hind quarter. Otherwise, I stuck to the recipe with the addition of two parsnips that were sitting in my vegetable drawer.

The meat smelled great as it browned, though it did make a big mess of the stovetop in spite of the splatter guard. The vegetables plus some bacon were softened before making a gravy with the addition of some flour, water, beef broth and red wine. The meat was added back in and the pot sealed up with foil, then it braised in a slow oven for nearly two hours, filling the kitchen with a wonderful aroma.

Shortly before the daube was done, I cooked some elbow macaroni and grated some bittersweet chocolate. The chocolate was stirred into the pot and allowed to simmer, stovetop, for a few minutes before stirring in the nearly cooked pasta.

I loved the flavors in this stew. The carrots and parsnips made the gravy sweet and the chocolate added extra complexity. I also liked how the elbows absorbed the delicious sauce. The only negative is that I definitely chose the wrong cut of meat to substitute. The round was a bit tough which took away from the end result. I think if the meat were more meltingly tender, I would have loved it. All isn’t lost as I would definitely try this again with the recommended chuck or cheeks. I’m sure that would fix the issue I caused. Howard, who is more of a beef stew person than I am, had the same problem with the meat, but thought the elbows added a fun touch to the meal.

I liked the wine I added to the pot: Toasted Head Untamed Red, which included the suggested Syrah grapes along with Zinfandel and Petite Syrah. There was enough left in the bottle for two glasses to drink along with the meal. Perfect!

We don’t’ share the recipes made in this cooking group, but I encourage you to find the recipe in Dorie Greenspan’s book Around My French Table.

To see how other bloggers’ daubes came out, and whether they found cheeks or not, check out their links here.