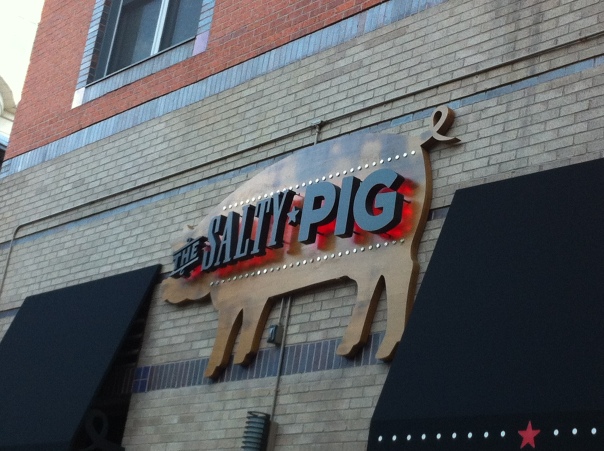 One strategy we use to get out of the house and into the city is a subscription to the Huntington Theatre Company. The tickets are for the Saturday matinee, which leaves the option for a lunchtime or early dinner adventure. Seven guaranteed Saturdays in Boston.

This week’s production was in the South End, at the relatively new Calderwood Pavillion. The show was The Luck of the Irish, written by Kirsten Greenidge and directed by Melia Bensussen. The subject of this play was a little-known slice of Boston history, “ghostbuying”. This was the practice in the mid-20th century where upwardly mobile minorities, in this instance an African-American family, used the cover another family, a white Christian family, to buy a home in an otherwise white neighborhood. Half a century later, the white family asks for their house back. The timeline moved artfully from the 1950’s to present day, weaving the current day story between the grown grandchildren of the original African-American family and the aged Irish couple with the story of the young grandparents and the young Irish couple. We enjoyed the production, and it provided lots of fuel for discussion afterwards.

Saturday was a beautiful day, so after the show, we stopped by The Salty Pig on the back side of Copley Square for a drink and snacks at an outside table. What’s not to love about a restaurant with a menu that has one section of salty pig parts and another section of stinky cheeses. We crafted our own platter with porchetta, salami, and chicken liver mousse along with some strong-flavored cheeses from Vermont. We rounded out the plate with some olives and pickled peppers. It was a fun place to hang out, and we’ll be back.

We were home on the early side and were still craving something more to eat. Have you ever tried an instant hot chocolate cake? You mix individual portions in mugs and zap them for a few minutes in the microwave. I had imagined the cakes to be runnier, like molten chocolate cake, but they were a little overcooked. The recipe I started with was for just one cake, and Howard and I had a lengthy discussion about whether the same timing applied to two cakes or whether the time needed to be adjusted. I need to work on the timing, but they were very promising. No advance planning needed, and near instant satisfaction. This is a keeper. 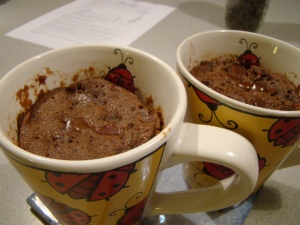 In the biggest mug you have, mix together the flour, sugar, cocoa powder, and salt with a fork. Add the egg and blend it in. Add cream, oil, and vanilla. Continue mixing until just combined. Now scatter the chocolate chips on top of the mixture. Microwave on high for 2 minutes, until puffed.

If you make two (what else would you do with the other half an egg?), try testing after 2 minutes. I cooked 2 cakes together for 4 minutes and it was too long. My guess is the perfect amount of time will be around 3 minutes. When I figure it out, I’ll update this post.