This week’s recipe for French Fridays with Dorie seemed old hat to me: Roasted Salmon and Lentils.  Salmon is one of my favorite kinds of fish, and lentils is my #1 favorite bean or legume.  I make both frequently, so I knew I would enjoy the menu.

My in-laws were in town, and I thought that my mother-in-law, a loyal follower of my blog, would enjoy sharing a Dorie meal.

The primary surprise for me was that even though this recipe seems like a old friend on paper, I learned something new about cooking both the salmon and the lentils.

When we prepare salmon, we typically grill it in summer, or broil it in winter. For Dorie’s version, a large salmon fillet (wild coho salmon, for me) was roasted in a very hot oven. I was a little skeptical because, I find that a large fillet is seldom done in the recommended 12 minutes when cooking under the broiler. What a revelation that roasting the salmon worked out to perfection. While we’ll still be grilling in the summer, roasting will be the new off-season cooking method chez moi. 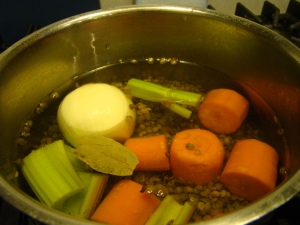 As for the lentils, I have been in on the secret of the tiny green Le Puy lentils for years. I think I first discovered them in the bulk section at Whole Foods, but they hae been my lentil of choice for salads and sides for many years. Dorie’s method for cooking the lentils again seemed similar to mine on paper, but the actual execution taught me a few new tricks. 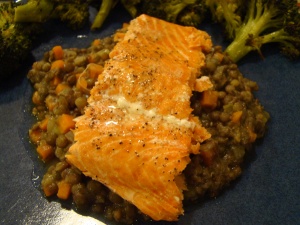 I served the salmon over a bed of lentils with roasted broccoli alongside. My in-laws enjoyed the meal as much as we did. Chalk this one up in the “Definitely Repeat” column of the Dorie scoreboard.

If you’d like to see how other bloggers’ roasted salmon and lentils came out, check out their links at French Fridays with Dorie.