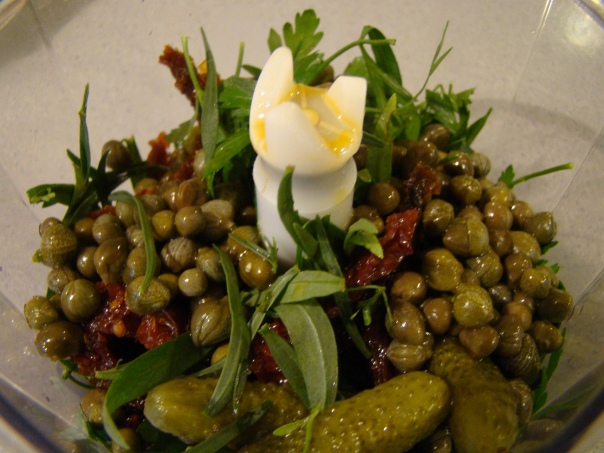 It’s Friday again. It was down to the wire this week for this week’s French Fridays with Dorie recipe: Café Salle Pleyel Hamburger, but the burgers got made and the post got written just in time. Burgers were the perfect thing to make while sipping margaritas.

This recipe was quite simple: a dressed-up hamburger. A variety of aromatics were mixed in with the ground beef. The sun-dried tomatoes, capers, cornichons, and fresh herbs dotted the meat with lovely flecks of red and green. The grilled burger was nestled in an eggy role and layered on a bed of homemade onion marmalade and sliced pickle and topped with coarsely grated Parmesan. 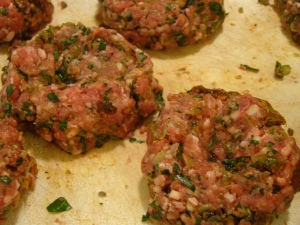 I thought it was pretty good, though in the fantastic August lineup, probably not my favorite for the month. I made the burgers about half the size called for, which is a good portion size at our house. Unfortunately, I think the roll was then too big for the burger (my fault), so each bite was a little too bready. I should have picked up slider rolls. I tasted the burger on its own, and it was packed with flavor, so I might lose the roll when I have another for lunch tomorrow. 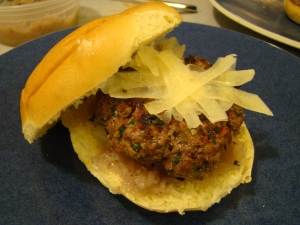 I was also on the fence about the onion marmalade. Despite the interesting ingredients, in the end, I found the marmalade bland and boring. That might get left out from the leftovers too.

I served the burgers with ears of super sweet corn and a bowl of panzanella (bread salad) made with farm fresh tomatoes. A peach and berry crisp was the perfect dessert for a summery dinner.

To see what other FFwD bloggers thought about the French burgers, check out their links at French Fridays with Dorie. I always discover new inspirations and ideas from the other cooks. We don’t post the recipes, but consider getting your own copy of the book, Dorie Greenspan’s Around My French Table.

Now we’ll spend the weekend waiting for Hurricane Irene’s arrival, hoping she’ll mellow out by the time she gets to the Boston area. For my family and friends in the Mid-Atlantic and point further south, stay safe!