As I sit here writing today’s post, all I can say is that if you live on the East Coast, what’s with this heat? We thought we were leaving the Boston area heat behind by escaping to the lake in Maine, but as I follow the temperatures today, it’s just as hot here as at home. Ugh!

I found this week’s recipe for French Fridays with Dorie, Braised Lemongrass-Coconut Pork, to be a seasonal challenge. A stew with root vegetables just didn’t feel like the right thing to be eating when you’re stuck under a “heat dome”, temperatures in the high 90’s for days. I have eaten more ice cream this week, 4 times already, and, true confessions, I don’t even like ice cream that much. (I know, it’s not normal. I’m also not a huge chocolate fan.)

My version is more of interpretation on the theme than a strict following of the recipe, though it does have the same structure. I kept with spirit of Dorie’s recipe so the sauce and flavorings were the same. I used chicken thighs because Howard made ribs over the weekend, and I was just plain “porked” out. I also took inspiration from the season’s vegetables and used steamed green beans and raw red and green pepper along with cherry tomatoes instead of the more autumnal ones suggested. I just realized I didn’t add anything from the onion family. I think I should have included some diced onion chunks, briefly stir-fried. I served this stew over jasmine rice, in a bowl. 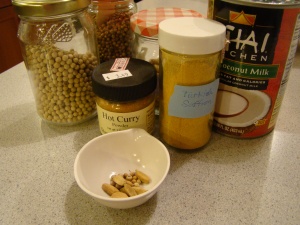 This one will go in the “OK” category. It was fine, but lacked excitement. It wasn’t quite Thai, it wasn’t quite Indian, it definitely wasn’t French. Even though I used hot curry powder, the flavors weren’t as strong or as interesting as they could have been. I’m not sure whether I will play around with this to try to make it more to my liking, but there are so many recipes out there to try, I think I’ll just move on. (To be fair to the dish, I don’t mean to dis it, but it just wasn’t 90-degree-weather fare.)

Next week’s recipe is intriguing: a mixed berry terrine. I’ve never made anything like it before. I know I’m the only one in my house that will eat this one, so I either have to figure out how to make a mini-version, or find someone who wants to share it with me.

For this cooking group, we don’t share the recipes, but if anything looks good to you, you can find it in Dorie Greenspan’s Around My French Table. Of course, you are welcome to cook along, any time you like. We’re here every Friday at French Fridays with Dorie. (Note that, this week, the server is probably down until the end of the weekend…)

If you are under the heat dome with me, stay cool this weekend. It looks like the temperatures will go back down on Sunday.