I Love a Parade

Yesterday was Patriot’s Day in Lexington, Massachusetts. This day commemorates the start of the American Revolution in 1775. This is a day on which my town shines. There is a full weekend of events including reenactments, pancake breakfasts, concerts, and a good old-fashioned parade.

Monday was a state holiday, but I don’t think I’ve ever worked anywhere that gives the day off. Sometimes I take it as a personal holiday, as I did this year. Mostly, I took advantage of the day to putter. But the main event for me was the parade. It’s a real olde-timey parade with local dignitaries riding in convertibles, floats, marching bands, baton twirlers, Shriner clowns on foot and in go-carts, Clydesdales, and local organizations showing their pride. Being a celebration of history, there are many Minuteman reenactors and some from the Civil War as well. Bands come from far and wide. I saw school marching bands from Pennsylvania and Wisconsin in addition from our own towns’.

LexFarm Peas in the Pod (me in front)

Usually, I’m a parade spectator, but this year, I marched with in the parade as part of the group from LexFarm, or the Lexington Community Farm Coalition. LexFarm is a local grassroots organization working to establish a community farm here in Lexington. To increase awareness and promote their mission, a contingent of supporters carried, or in my case, wore, “absurdly large vegetables” as we followed the parade route about 3 miles from East Lexington to Hastings Park. We walked for about an hour, and it was a blast. I met some new and interesting people, enthusiastic about a cause I agree with. I’m the one in the green-covered bicycle helmet as the front pea in the pod.

On my way to the parade start, I made one other serendipitous discovery. I noticed a new storefront on Mass Ave in East Lexington, just past Wilson Farm, heading to the center. Lately, I have been obsessed with all things French, demonstrated by my participation in French Fridays with Dorie and a pile of “I moved to France” memoirs next to my bed. It was inevitable that the sign for Macaron Sweeterie would catch my eye. The shop actually opens today, Tuesday, but yesterday, they were offering preview samples of their macarons and gelato. Macarons, not to be confused with the coconut-laden macaroons, are a French delicacy. These light and whimsically-colored almond sandwich cookies come in a wide variety of flavors. I tried the Honey Lavender and Wedding Almond. I can’t wait to go back for more. What a delightful find! I wish them bonne chance in this new endeavor!

Patriot’s Day ended with a Passover seder. We were invited to join the family of some friends to share their holiday meal. If you don’t know, Passover is an eight-day long festival to commemorate the freeing of Israelites after decades in slavery to Egyptian pharaohs. On the first two nights, the story of Exodus is retold before and after the meal. Everyone at the table participates in reading a part of the story. Passover is also the holiday where you don’t eat bread or other leavened grains to remember that when the Israelites fled Egypt, they left without having time for their daily bread to rise. You eat matzah, flat unleavened bread, instead. 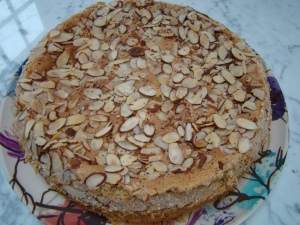 I offered to bring a dessert and decided to try something new. This almond-citrus torte was airy and moist. Most of its substance came from ground almonds, with just a little bit of matzo meal. It was a hit. I think I would make this any time of year, maybe using regular flour instead of matzo meal. The recipe suggested serving a strawberry sauce on the side. I did make the strawberry sauce (which looked like strawberry ketchup), but I preferred the cake plain. It would also be nice sprinkled with confectioners’ sugar.

Almond-Citrus Torte
Adapted from this recipe from Epicurious

Preheat the oven to 350F. Brush a 10-inch springform pan with oil. Line the bottom with parchment paper round. Brush paper with oil. Place 2 Tbsp matzo meal in the pan and shake to coat. Tap out excess.

Whisk together the remaining 2 Tbsp matzo meal, almond meal, and 1/3 cup sugar in a medium bowl. Place egg yolks in a large bowl and egg whites in another large bowl. Add 1/3 cup sugar to the egg yolks. Using an electric mixer, beat the yolk mixture until it is thick and fluffy and pale yellow, about 4 minutes. Beat in 6 Tbsp olive oil, then add in lemon and orange juice and lemon zest. Mix in the dry ingredients. Wash and dry the beaters.

Add salt to the egg whites. Using clean, dry beaters, beat egg whites until soft peaks form. Gradually add the final 1/3 cup sugar and beat until stiff but not dry. Stir one quarter of the egg whites into the yolk mixture to lighten it. Gently fold in remaining egg whites, in three additions, until well combined. Transfer the batter to the prepared pan. Sprinkle almonds over the top.

Bake cake until gold brown and a tester comes out clean, about 45 minutes. Place pan on rack and cool completely in the pan. Once cooled, run a flat blade around the edge of the cake to loosen. Release pan sides and remove. Gently turn the cake onto a plate to remove the pan bottom, peeling off the parchment paper. Then, gently flip the cake back onto a serving plate. Optionally, sprinkle with confectioners’ sugar. (Note you can make kosher for Passover confectioners sugar by grinding together 1/3 cup granulated sugar with ½ teaspoon potato starch in a spice or coffee grinder until powdery.)

Serve plain or with fresh fruit on the side.